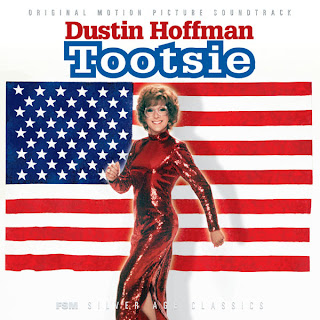 Like Quincy Jones, Lalo Schifrin, Michel Legrand and many others, composer and pianist Dave Grusin has a following among both jazz listeners and film-music fans alike. And like those jazz artists that also have a career in film, the two very different styles of musical artistry required for each medium rarely find a happy union among audiences with certain expectations.

Dave Grusin found a happy medium to wed both his jazz fusion magic with the prowess of film composition he’d already perfected in such Hollywood hits as The Graduate (1967), Murder by Death (1976), The Goodbye Girl (1977), Heaven Can Wait (1978) and On Golden Pond (1981) and memorable TV scores for The Girl From U.N.C.L.E., It Takes A Thief, Baretta and St. Elsewhere with his tremendously infectious score to 1982’s Tootsie.

The film starred Dustin Hoffman as an unemployed actor who dresses in drag to land a role on a soap opera. But when his outspoken feminist creation, “Dorothy Michaels,” becomes a media sensation, he grows desperate to stop leading a double life—and to confess his love for his colleague, played by Jessica Lange. With a masterful blend of drama, comedy, contemporary realism and social commentary, and brilliant supporting performances by Dabney Coleman, Teri Garr, Bill Murray, Charles Durning and director Sydney Pollack (as Hoffman’s apoplectic agent), Tootsie is justifiably a classic.

Tootsie went on to become a huge hit and one of the most highly regarded comedies in Hollywood history, with a love song (“It Might Be You”) that has become a pop standard. Yet the soundtrack has been virtually unavailable on CD—until now.

The pitch-perfect score to Tootsie was by Dave Grusin, Pollack’s longtime collaborator on films such as The Yakuza, Three Days of the Condor, Bobby Deerfield and The Electric Horseman (and later, Havana, The Firm and Random Hearts).

Tootsie’s unique combination of laughs with serious subject matter required an original approach, and Grusin elevated the film by using the modern jazz fusion style he had helped create in his career as a recording artist. Upbeat, energetic and contemporary, jazz fusion was the perfect choice for Tootsie, and Grusin himself performed the keyboards.

Issued between Grusin’s jazz-fusion albums Out of the Shadows (1982) and Night-Lines (1984) - a live album was recorded five months before Tootsie, featuring the Grammy Award winning “Summer Sketches ’82,” but not issued until after the soundtrack – the Tootsie album fits in remarkably well with the composer’s jazz-fusion work. It is something that easily satisfies both his jazz and film-music audiences.

The good folks at Film Score Monthly (FSM) have issued Tootsie for the first time on CD (outside of a brief release in Japan some two decades ago), presenting the ten songs from the 1982 Warner Bros. soundtrack album plus 18 additional tracks that constitute the entirety of the score Grusin provided for the film. Much of the music that appeared on the original LP was from Grusin’s original score, except for three tracks (“Don’t Let It Get You Down,” “Sandy’s Song” and “Out of the Rain”), re-recorded in New York City a mere two weeks before the official soundtrack album was issued in December 1982.

There are many highlights to the set, including “An Actor’s Life (Main Title),” “Out of the Rain,” “Don’t Let It Get You Down” and “Working Girl March,” and very much some of the best music Grusin produced in his jazz-fusion style. Even the classic and well-known “It Might Be You” benefits nicely by Grusin’s tremendous melody and lovely way of orchestrating with electric keyboards (much of Grusin’s acoustic piano work here, on the other hand, is gloriously suggestive of Richard Tee’s playing). The newly heard source cues, some of which were not even used in the film, reveal Grusin’s always extant ability to produce excellent straight-ahead jazz too.

The FSM set is a marvelous celebration of Dave Grusin’s music and is especially well packaged, featuring first-rate liner notes by the terrifically thorough Jeff Bond and Lukas Kendall, aided in some small measure by your humble narrator.

Tootsie is very highly recommended, particularly to those listeners who – like me – could not get enough of Dave Grusin’s magical jazz fusion from the period (1977-83) and it’s a welcome addition to the terribly slim catalog of available Dave Grusin scores.

For more of my musings on the tremendous music of Dave Grusin, please check out my posts Grusin’s Goodies and Dave Grusin’s Soundtracks.
Posted by Douglas Payne at 1:17 PM