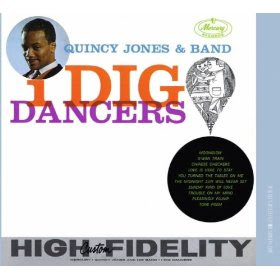 The French arm of Universal Music recently extended its remarkable “Jazz in Paris” series by releasing a number of classic French-made jazz albums on CD with original album covers, bonus tracks, new notes, all housed in beautiful gatefold digipak sleeves and available at tremendously affordable budget price points. Among the interesting, even historic, releases in this series – which mixes American leaders in Paris with French Leaders expounding upon the American art form – is the far too little-known Quincy Jones classic, I Dig Dancers!, much of which was recorded in Paris with an all-star group of American jazz icons.

Many of Universal’s “Jazz in Paris” releases have previously appeared on CD in other guises. But this is the first time I Dig Dancers! has found its way onto CD, outside of a release in Japan and an expensive Mosaic box set.

I Dig Dancers! is almost too good to believe. Simply consider the line-up, featuring Benny Bailey and Clark Terry on trumpets, Jimmy Cleveland, Åke Persson, Melba Liston, Quentin Jackson on trombones, Phil Woods, Jerome Richardson, Budd Johnson and Sahib Shihab on saxes, Patti Bown on piano and Les Spann on guitar and flute. It amounts to a jazz lover’s dream orchestra, assembled to accompany the European tour of Harold Arlen and Johnny Mercer’s Free and Easy. The Paris premiere of the show took place at the Alhambra on January 15, 1960, and was scheduled to play for a month. But for various reasons it didn’t last that long.

When everybody else packed to go home, Quincy Jones felt he had assembled too top-notch an orchestra to dismantle. With the talent he pulled together, he felt sure he could get bookings throughout Europe, which, for the next ten months or so, he actually did. This orchestra played often throughout Europe and even waxed several recordings, including one with Andy Williams and this one (a number of live recordings were captured at the time and later issued many years after the fact).

The concept of I Dig Dancers! is somewhat retrospective, recalling a time when the great jazz orchestras of yore, like Duke Ellington, Count Basie, Benny Goodman and others, made jazz you could dance to. Hard to believe there was a time when jazz was considered dance music. But bebop probably did much to change that sort of jazz and also – probably - the general popularity the music once enjoyed. Certainly, an album like I Dig Dancers! would have been considered old fashioned when people like John Coltrane, Ornette Coleman and Sonny Rollins were redefining jazz all over again. But the remarkable joy of the compositions and the audibly genuine love the musicians have for the music shines through in waves of gloriously swinging sound.

Upon returning to the states in October 1960, Q reconvened the group in New York City to round out the rest of the album. Here Quincy Jones welcomed Freddie Hubbard, Curtis Fuller and Oliver Nelson to the fold for the album’s original version of “Pleasingly Plump,” Patti Bown’s excellent “G’wan Train” (lushly arranged by Billy Byers and beautifully featuring Julius Watkins (?) and Phil Woods), Melba Liston’s remarkable “Tone Poem” (featuring Oliver Nelson), “You Turned The Tables On Me” and a bonus alternate take of “G’wan Train” (featuring Phil Woods).

With a Quincy Jones record, you often tend to focus on the songs or the remarkable players. But too little is made of Q’s way with a chart. I Dig Dancers! Is a treasure trove of sassy, pristine and wonderfully witty arrangements, presented with a never-too-much but never-too-little mix of story-telling flourishes and seasonings written specifically to let orchestra members highlight in their own inimitable way.

Q’s sound genius is prominent throughout I Dig Dancers! and is most notable on “Pleasingly Plump,” “Tone Poem,” “Chinese Checkers,” “Trouble on My Mind” and Benny Powell’s “Parisian Thoroughfare,” resulting in an album that is superbly transcendent and timelessly magical.
Posted by Douglas Payne at 5:41 PM