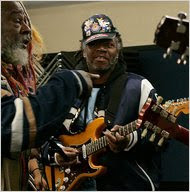 Garry Shider, the funk-rock guitarist and singer whose spacey but soulful and rhythmically powerful playing provided one of the pillars of the influential Parliament-Funkadelic sound of the 1970s and propelled him into the Rock and Roll Hall of Fame, died on Wednesday at his home in Upper Marlboro, Md. He was 56.

The cause was brain and lung cancer, said his son Garrett.

Onstage, Mr. Shider, known as Starchild or Diaperman (because of his fondness for performing dressed only in a loincloth), cut an outlandish figure, emphasized by his tie-dyed dreadlocks. But he delivered incendiary solos and impressively funky rhythm work on his guitar, most notably on the jam showpiece “Cosmic Slop.” With George Clinton, the founder of Parliament and Funkadelic, he wrote some of the groups’ signature songs, including “One Nation Under a Groove” and “Atomic Dog.”

Born in Plainfield, N.J., on July 24, 1953, Mr. Shider began performing as a child, singing and playing in a local family-based gospel group, the Shiderettes, and providing support for nationally known acts like Shirley Caesar and the Mighty Clouds of Joy. It was at this time that he met Mr. Clinton, who owned a barbershop near the church Mr. Shider’s family attended and led a doo-wop-inspired vocal group called the Parliaments, which would later evolve into the intertwined groups Parliament and Funkadelic, also known collectively as P-Funk.

As a teenager, Mr. Shider played in a band called U.S., short for United Soul, some of whose recordings were produced by Mr. Clinton and the keyboardist Bernie Worrell, later to be another important member of the P-Funk family. That led to his being asked to play on Parliament and Funkadelic recordings in the early 1970s and an invitation shortly afterward to join the bands.

Along with his fellow guitarists Eddie Hazel and Michael Hampton, Mr. Shider, his playing by now also incorporating the influences of Jimi Hendrix and Sly Stone, gave both punch and funk to hit P-Funk albums including “Standing on the Verge of Getting It On” and “Hardcore Jollies” and live performances throughout the remainder of the decade. He also played with the offshoot bands of other P-Funk members, especially those of Mr. Hazel and the bassist Bootsy Collins.

After Parliament-Funkadelic dissolved in the early 1980s, Mr. Shider continued his association with Mr. Clinton and served at times as musical director of the P-Funk All-Stars, a successor band. He also performed with other P-Funk members in the movies “PCU” and “The Night Before,” playing songs he helped write; appeared on records like the Black Crowes’ “Three Snakes and One Charm”; and had his earlier work sampled on hit CDs by rap performers like Dr. Dre, OutKast and Digital Underground. In 1997, he and the other members of Parliament-Funkadelic were inducted into the Rock and Roll Hall of Fame.

Benefit concerts to help pay Mr. Shider’s medical bills have been scheduled for July 10 in Plainfield and July 11 in Manhattan.

In addition to his sons, Garrett and Marshall, Mr. Shider is survived by his wife, the singer and songwriter Linda Shider.

Did you know that that you can make dollars by locking premium pages of your blog or site?
Simply join Mgcash and embed their content locking tool.

Are you paying over $5 / pack of cigs? I'm buying all my cigs over at Duty Free Depot and this saves me over 60% from cigs.

VaporFi is the highest quality electronic cigarettes supplier out there.

Join EverydayFamily NOW and you will get stage based pregnancy and baby email newsletters, offers and weekly coupon alerts as well as access to free baby samples, coupons, baby magazines & much more.

New Members Can Win Free Diapers for a Whole Year!