Dimitri from Paris “Get Down with the Philly Sound” 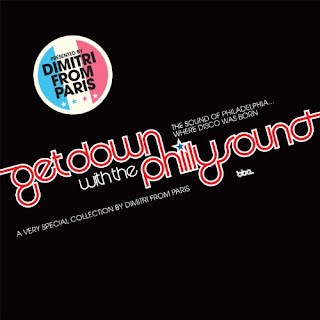 DJ Dimitri from Paris, born Dimitris Yerasimos in Istanbul, Turkey, was born six months after me in 1963 and grew up, like I did, listening to disco. Unlike me, though, he claims in his notes to this worthy two-disc set that “disco sucks” and that he has always hated disco in favor of the non-white, non-suburban music of Barry White, James Brown and Shalamar which he considered “funk” not “disco.” Uh huh.

He claims that he only discovered the joys of “disco” after House music started sweeping DJs like him and dancers into its repetitively intoxicating groove in the late 80s. But he insists that only certain types of “disco” music qualify as music or, at least, worthwhile grooves.

When he tried to determine what kind of disco he actually liked, Dimitri found it all emanated from Philadelphia during the 70s. At that time, Philadelphia was home to the great Kenny Gamble/Leon Huff holy house of Philadelphia International Records (PIR) and a studio team of musicians, arrangers and producers that helped procure great recordings for almost everyone of note at one time or another like David Bowie, Stylistics, The Spinners, Dexter Wansel, Lou Rawls, O’Jays, MFSB, Salsoul Orchestra, Montana, The Jacksons, Dusty Springfield, Grover Washington, Jr., Gabor Szabo, Elton John and many, many others.

It’s simply amazing to consider the sheer volume of good and historically significant music that actually came out of Joe Tarsia’s Sigma Sound Studios, especially during the 1970s. Get Down with the Philly Sound does an adequately decent job of capturing a small fraction of this music. Inspired by innovative producer Tom Moulton’s classic Philadelphia Classics (Philadelphia International, 1977) – the world’s very first official remix set – Dimitri from Paris has compiled a two-disc set of Philadelphia sounds recorded for a variety of labels between 1973 and 1979.

For the most part, the two-disc set avoids the obvious. That’s the good news.

Disc one features 13 grooves from Teddy Pendergrass, Eddie Kendricks, Philly Devotions, Harold Melvin & The Blue Notes, The Jacksons, John Davis & The Monster Orchestra, Carl Bean (his classic “I am gay” proclamation “I Was Born This Way”), The Trammps, Charles Mann and T.J.M.

Disc two features Dimitri’s “reworks” of nine of the previous disc’s tunes. Dimitri does this in a highly commendable way that doesn’t obfuscate or change the original groove of the originals but, rather, actually enhances the jazz-like and soul symphony-like convention of the originals. On the other hand, the “Reworks” disc leans a bit too heavily on Teddy Pendergrass, with his sub-Marvin Gaye wailing and vocal intrusions overbearingly commanding a whopping five of the disc’s nine long tracks. Certainly there was more of the Philly Sound that Dimitri from Paris could have found without turning the whole thing into something of a Teddy Pendergrass tribute.

For my part, I dislike the use of the “disco” nomenclature throughout this set, particularly in Dimitri’s note and writer Al Kent’s otherwise thorough and wonderful notes. As a long-avowed disco fan, I have neither considered much of the Gamble-Huff oeuvre nor much of the many records issued by PIR (the bulk of material that Dimitri features in his "Reworks”) as “disco.” It’s very soulful material that is rich in rhythmic improvisation and beautifully-conceived string parts. Hardly anything else can touch the classy music that came from Philadelphia during this period. But, as disco, it’s kind of a stretch…whatever your definition.

Still, it doesn’t make it disco. The Phillys probably wouldn’t even want to consider their music disco, unless they could take credit for inventing the musical form, which really came from out of the New York and Miami underground much more effectively – and differently – than what was coming out of Philadelphis.

And while there are many that might hear this music from Philly as “disco” or something better than “disco,” Get Down with the Philly Sound is not disco by definition and much more enjoyable on a number of different levels than the “disco” nomenclature would generally allow.
Posted by Douglas Payne at 9:42 PM