“A Street In Bombay” by Amancio D’Silva 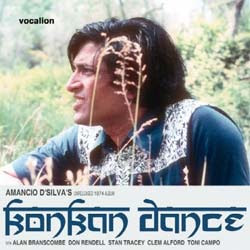 The truly amazing Indian guitarist Amancio D’Silva (1936-96), who made a name for himself as a jazz player in London during the late 60s and early 70s, recorded several albums under his own name, including the tremendous Konkan Dance, which features this jewel of East-meets-West jazz, “A Street in Bombay.”

The song features the handsome and tremendously talented Amancio D’Silva on guitar, Don Rendell on saxophones, Alan Branscombe on flute, vibes and electric piano (none of which are immediately detectable here), the legendary Stan Tracey on piano, Toni Campo on bass, Clem Alford on sitar, (most likely) Doug Wright on drums and either Keshav Sathe or Mick Ripshar on tabla.


The original recording was laid down somewhere between 1972 and 1974 at Lansdowne Studios, London by the legendary British jazz producer Denis Preston (1916-79).


According to the Amancio D’Silva web site, this album was never released in its time, so to speak, which it says may have had something to do with Denis Preston’s passing. However, with the inclusion of the track “A Street in Bombay” on Gilles Peterson’s Impressed Volume 2, interest in the whole album began mounting during 2005. This led to a full release in February 2006 by British label Vocalion, with mastering by the renowned Mike Dutton.

“It's unlikely, as Record Collector magazine said, that “you will ever hear Anglo-Indian music as subtle or as beautiful as this.” Truly, more people need to hear this music.
Posted by Douglas Payne at 12:46 AM

We blogged about Amancio on our Blog
http://bluerhythm.wordpress.com/2009/11/14/bridging-the-world/

Hope you enjoy reading it

www.findingcarlton.com
Uncovering the Story of Jazz in India