“Be My Lover Now” by Philip Oakley and Giorgio Moroder 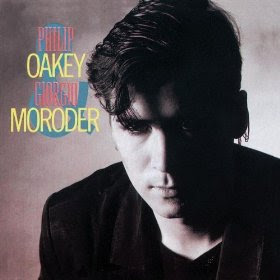 Today’s disco discovery: While I remember when this album came out in 1985, I must confess that I never heard “Be My Lover Now” before, well, now. Written and performed by the handsome leader of the Human League (on vocals) and Giorgio Moroder (in one of his best dance numbers), “Be My Lover Now” is a tremendous dance classic that seems to post-date what Vince Clarke took from Moroder to craft some of the historic music of both Depeche Mode and Yazoo (Yaz). It’s a shame that Moroder had to steal from the thieves who stole from him…but this one works.

“Be My Lover Now” was the third – and last – single issued from the album Philip Oakley and Giorgio Moroder, a partnership which began in 1984 with the song “Together in Electric Dreams,” the hit theme to the long-forgotten film Electric Dreams. Unfortunately, nothing after “Together in Electric Dreams,” including “Be My Lover Now,” performed particularly well and Oakley went back to the Human League, which also never performed as well as it had when it issued the great “Don’t You Want Me” way back in 1981!

The rather stark video that accompanied “Be My Lover Now” seems to borrow a little something from Robert Palmer’s much better-known “Addicted to Love,” but with some extremely weird twists. While it’s certainly worth watching, the instrumental of the song (featured below) is well worth hearing for an example of the glorious dance music Giorgio Moroder was capable of at even this late date.
Posted by Douglas Payne at 1:00 AM

Good post! It's nice to discover forgotten gems. I like the complete album both gentlemen did. The video of 'Be my lover now' couldn't have borrowed from Robert Palmer's 'Addicted to love', because it came out a year later (1986).