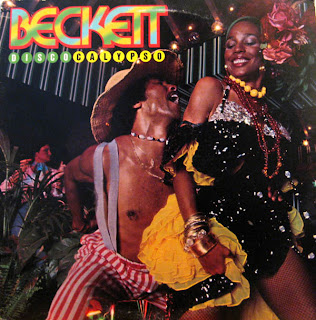 Today’s disco discovery: How about this from the dusty bins of disco history? Not unlike Ralph MacDonald’s 1976 smash “Calypso Breakdown,” immortalized the following year in Saturday Night Fever, this neglected gem from 1977 fuses the two distinct genres of the song’s title for a groove that’s compulsively exciting and eminently danceworthy. “Disco Calypso” is the title track to Alston “Beckett” Cyrus’ second album, Disco Calypso and his American debut on the mighty, mighty Casablanca label, the high house of disco in the day.

A Native of the Caribbean island of St. Vincent, Cyrus eventually dropped the second “t” from his nickname and went on to record a long string of party soca albums under the names Becket and Alston Becket Cyrus, scoring a number of hits along the way: “Coming High,” his first hit, also included on Disco Calypso, “Gal Ah Rush Me, “Teaser,” “I Love To Party” and “Soca Rocker Cabaret.” Many of these were arranged by soca keyboardist Frankie McIntosh, the magician behind the tremendous arrangement heard here.

“Disco Calypso” was recorded in New York City in 1977 and, despite a prominent feature in the Robert Shaw/Jacqueline Bisset film The Deep, directed by Peter Yates - and a prominent place on the otherwise forgettable soundtrack album too (except for the cool copies pressed in blue vinyl!), the song just didn’t make it big. ABC, as he is also known, never recorded for another major American label, issuing (himself?) most of his music on the Oxon Hill, Maryland-based Cocoa Music label.
Posted by Douglas Payne at 3:19 PM