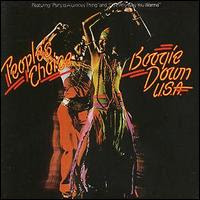 Here’s a great one by the short-lived Philly amalgamation called People’s Choice from the groovin’ and worthy album Boogie Down U.S.A. (TSOP, 1975). While the group itself said that “People’s Choice is…you. People’s Choice is…People,” People’s Choice was actually Frankie Brunson on definitive tenor lead vocals and keyboards (which lead here), David Thompson on percussion, Roger Andrews on bass and Guy Fiske on guitar.

As was the case on about half of the album – reissued in full (plus several bonus tracks) on a worthy 1996 Collector’s Choice CD called Golden Classics whose cover replicates the group photo on the back side of the original LP - “Mickey D’s” is a refreshing take on the instrumental side of the magical Philly sound of the day. It’s jazzy in a funky way and funky in a Blaxploitation way and soulful in a magical way that sticks with you like a good musical meal.

While People’s Choice scored some minor hits with “Do It Any Way You Wanna” and “Party Is A Groovy Thing,” it’s amazing these guys never made it big - really big - and that their transcendentally soulful sound didn’t cross over into the big time like MFSB’s great signature number “TSOP (The Sound of Philadelphia),” aka the Soul Train theme. It sort of reminds me of Black Heat (and their great "Wanaoh"), another small soul group that tried to marry jazz with soulful funk and ended up with nothing in the way of the recognition they deserved. 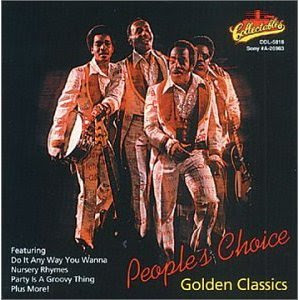 There’s more to Boogie Down U.S.A. than I’m able to share here. But “Mickey D’s” is worth considering for its greasy groove and addictive appeal. Sounds like the “super size me” restaurant, doesn’t it?
Posted by Douglas Payne at 1:34 AM