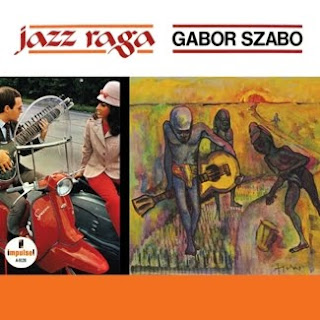 The estimable Light in the Attic (LITA) has taken it upon themselves to finally issue one of guitarist Gabor Szabo’s finest and least known albums, Jazz Raga. Among one of my very favorite of the guitarist’s records, this long-neglected album is aptly summarized by the LITA promotional text as “East meets West, guitar meets sitar, on this seminal 1967 Impulse Records jazz release.” It is a classic that has never properly gotten its due by jazz critics or even by those who admire Gabor Szabo’s better-known or more jazz-like music.

Jazz Raga is a brilliant, much-derided record featuring Szabo’s distinctive guitar and his overdubbed, slightly out-of-tune sitar playing. Too easily dismissed, the 34-and-a-half minute set contains some of Szabo’s best recorded guitar work: enchanting single-line runs mixed with jangled chords, repetitive riffs/drones and memorable, melodic solos. The short tunes (most under four minutes each) include Szabo staples like "Mizrab" and "Comin’ Back" and bring out Szabo’s ability to effectively compress good ideas. The core unit of Jack Gregg on bass and Bernard “Pretty” Purdie on drums contributes successfully to the real groove of the record (something new for Gabor Szabo) and even the odd-sounding sitar isn’t as obtrusive as is often suggested.

LITA gives Jazz Raga the respect it has long deserved some four and a half decades after the fact, reissuing the record on vinyl and, for the first time ever, on CD this month. The gatefold digipak CD (the LP release is forthcoming) is a stunning presentation, maintaining the original LP's front and back cover and even the orange and black Impulse spine. Included in the set is a positively overflowing 40-page color booklet that includes unseen photos (courtesy of brother John Szabo), interviews with Bernard "Pretty" Purdie, Rudy Van Gelder, Jack Gregg and Michael Shrieve and truly brilliant liner notes by Doug Sheppard (Ugly Things, Goldmine) revealing, among other things, that Larry Coryell was intended to be part of the sessions.

I am very pleased to have been able to provide LITA with much of the background and documentation to prepare the release of Jazz Raga and they have succeeded immeasurably by respecting the record with great reverence as a Psych classic and honoring its musical gravity with a properly beautiful package.

Jazz Raga is readily available now through LITA or, of course, from the good folks at Dusty Groove. It’s a must have for guitar fans and Psych listeners of all stripes.
Posted by Douglas Payne at 3:12 PM