“It’s A Holiday” by Material with Nona Hendryx 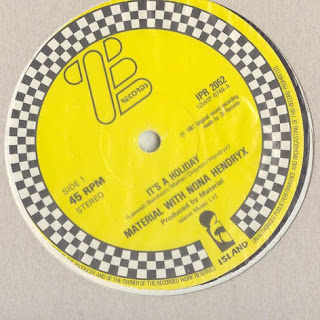 Today’s disco discovery: In between her Labelle years and her 80s solo onslaught, the great Nona Hendryx did a lot of session work in New York City. Eventually she hooked up with some of the Downtown crowd and wound up as part of the Talking Heads ensemble and as a favored vocalist with Bill Lasewell’s still revolutionary Material.

The 1981 “It’s A Holiday” is one of the earliest collaborations between Nona Hendryx and Material. The two would also collaborate on the brilliant dance-floor classic “Busting Out” as well as One Down album staples “Take A Chance” and a riveting cover of Sly and the Family Stone’s “Let Me Have It All.”

Shame on Madonna for either ripping this off or dumbing it down a few years later.
Posted by Douglas Payne at 11:25 PM