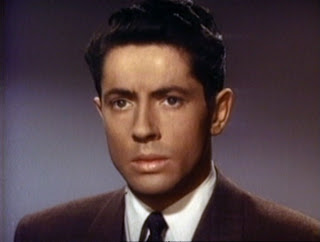 Farley Granger never considered himself a movie star or even a Hollywood player. He even bought himself out of a strait-jacket, star-making contract in order to pursue his love of acting in the theatre. While he never really found his niche on the stage, he did consider himself an actor first (someone who professes to love the theatre over moviemaking) while earning a healthy and seemingly happy living as a character actor on television.

Farley Granger died on Sunday, July 27, at his home in Manhattan. He was 85.

Like Elizabeth Taylor, who died to great fanfare only a week before, Farley Granger was one of the last of the old Hollywood stars: beautiful and glamorous and always rumored to be seeing Hollywood’s hottest. He made movies that made people pay attention (at least at first) and he was paired with some of movieland’s best directors.

He was also one of the most interesting people in Hollywood, dating some of the biggest celebrities of both sexes. The tabloids talked about the women in his life like (mostly) Shelley Winters and Ava Gardner. But his male conquests included Leonard Bernstein and Arthur Laurants, both of whom created West Side Story.

While his greatest successes came early on, Farley Granger became sort of an early “has been,” seemingly abandoning Hollywood for television theatre (Ford Television Theatre, Playhouse 90, Kraft Theatre, Chrysler Theatre) and episodic TV (Ironside, Get Smart, The Name of the Game, Hawaii Five-O). He worked steadily through the early 1990s, more or less retiring altogether in Manhattan with Robert Calhoun, his companion of many years.

Calhoun, who died in 2008, also helped Granger write his autobiography Include Me Out, which was published in 2007. The book, as fascinating a name-dropping Hollywood tell-all as one could want from a guy like Farley Granger, was a little disappointing in the unflinchingly unapologetic and inexplicably unexplained tone of many of the strange, career-killing choices the actor made throughout his career.

I was immediately struck by Farley Granger the first time I saw him as Guy in Hitchcock’s Strangers on a Train (1951), with Robert Walker, a film based on Patricia Highsmith’s first novel of the same name. Strangers launched me into my great love of Patricia Highsmith (who I would probably consider my favorite writer), a deeper obsession with Alfred Hitchcock (probably my favorite director, who made a film here that neither Jimmy Stewart nor Cary Grant could ever have played properly) and a great fascination with the hunky Farley Granger.

Farley Granger is cast as such an object of admiration in this film, it’s hard not to sympathize and swoon over him, despite all the stupid things he does throughout. His innocent idiocy makes him even more attractive. Plus, he’s so devilishly handsome in such an angelic way. Granger brings Highsmith/Hitchcock’s Guy so forcefully to life, that it’s no wonder Robert Walker’s Bruno is smitten and crazed with his own ideas of ideal whatever.

Hitchcock’s film is quite different than Highsmith’s book, though the conceit remains the same. Yes, Hitchcock changes the story for the better. But Highsmith’s story would be nearly ludicrous were it not for the performance Farley Granger brings to Guy. He’s no sissie. He’s just a dumb (but beautiful) innocent. Very few actors could have conveyed such horrible confusion so horrifically convincingly.

The Leopold-Loeb conundrum of Rope, filmed with innovation some three years previous to Strangers, casts Granger as another hopeless innocent. Here, this babe in the woods is even more fragile. Stupid and superior, yes; but impressionable and vulnerable too. Again, Farley Granger reaches for something deep and disturbing inside that makes the multitudinous multisyllabic dialogue of others meaningless and the acidic erosion of his soul so powerfully meaningful.

He explores this further with far more angst in such great noirs as Nicholas Ray’s They Live By Night (1949 – probably Granger’s sexist performance and surely his sexiest presentation) and Anthony Mann’s terrific Side Street (1950 – featuring great location shots in New York City).

Granger ventured to Italy to make the film he said he was most proud of, Luchino Visconti’s Senso (1954). Perhaps despairing of the film‘s lack of international success and his struggle to be accepted on his own terms, Granger began to rebel against the film-making system. Hereafter, he never found the sort of success that these early, starry associations brought to him.

I recall Farley Granger impressing me again as an Ambassador in the mid-80s thriller The Imagemaker, more for his star turn and the fact that he looked so good for his age (he was 61 at the time). The man aged extraordinarily gracefully, maintaining his youthful good looks right up to the end of his career.

I’ve since enjoyed Farley Granger as the baddie friend of Oscar Goldman on 1974’s “The Midas Touch” episode of The Six Million Dollar Man, the drunken nephew on the first episode of 1975’s brief but brilliant series Ellery Queen and for the roles he played in such Gialli as Something is Creeping in the Dark, Amuck and so Sweet, So Dead while living in Italy during the 1970s.

Despite his reluctance to accept or even achieve Hollywood stardom, Farley Granger was one of Hollywood’s greats and one of the last of its stars to pass into legend.
Posted by Douglas Payne at 2:31 AM

Trying to find the Best Dating Site? Create an account and find your perfect match.

Start following our signals NOW and profit up to 270% per day.