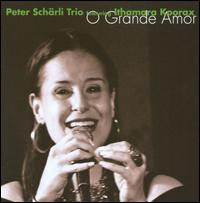 In their second recording together, Swiss trumpeter Peter Schärli and Brazilian singer Ithamara Koorax have come up with a beautiful reflection on Brazilian music that goes far above and beyond expectation.

Schärli, whose attractive sound and complimentary interjections suggest the influence of Polish trumpeter Tomasz Stańko, and Koorax were first brought together in 2006 by the legendary Brazilian percussionist Dom Um Romão (1925-2005), who had previously worked with both musicians on separate occasions, to record Obrigado Dom Um Romão.

Here, Peter Schärli teams his remarkably sensitive trio with Hans-Peter Pfammatter on piano and Thomas Dürst on bass with the ethereal and lovely voice of Ithamara Koorax in a way that’s most unusual. They never give the impression of a trio backing a singer. This is a superbly well integrated quartet of musicians who play with each other, not for the benefit of making one soloist sound better.

The sound of the Schärli trio with Ms. Koorax is also one that never falls into patterns of predictable. Theirs is a cohesive jazz logic that belies the standard bossa-nova pretense. These imaginative creatives rethink their melodies, many of which are not the typical Brazilian standards. The absence of percussion also requires the melodists to think and react rhythmically, which makes for a more compelling listen.

The program starts beautifully with Antonio Carlos Jobim’s romantic “Fotographia” (first heard on 1965’s The Astrud Gilberto Album and then on the composer’s 1967 A Certain Mr. Jobim, which featured Dom Um Romão) before alternating to the spirited consideration of “Sandalia Dela,” Luiz Claudio’s little-known sprite from Duke Pearson’s 1969 How Insensitive (with Flora Purim).

Launching into Ivan Lins’ “Setembro,” best known from its appearance on Quincy Jones’ 1990 album Back on the Block (with vocals by Sarah Vaughan and Take 6), the quartet falters a bit here. Each player’s performance is assured and attractive. But together the group isn’t as sure of the tune’s highly reverential tone. This is corrected by the pianist’s own “Wedileto,” a gorgeous piece of wordless celebration that engages Schärli in a lovely duet with the singer and elicits several noteworthy solos.

A certain sort of climax is reached with the quartet’s uncannily elegant consideration of Jobim and Vinicius de Moraes’ “O Grand Amor,” which first appeared on the 1963 classic Getz/Gilberto, as did the most well-known version of Ary Barroso’s 1943 song “Para Machucar Meu Coraçao,” which the quartet regards here with especially loving consideration.

O Grande Amor is, ultimately, a superb jazz-like exploration of Brazilian music made by musicians who not only understand the music thoroughly, but deliver it more beautifully than expected.
Posted by Douglas Payne at 12:00 AM