The Warm World of Jack Sheldon 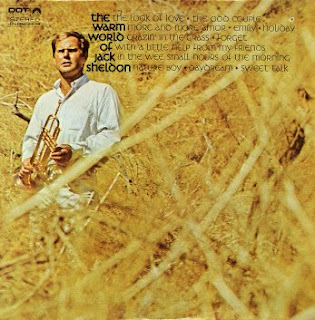 One of the finest yet least known albums of the sixties is The Warm World of Jack Sheldon (Dot, 1968), an elegant and groovy piece of lighter-than-air jazz that holds up much better than its title or its time period might suggest.

Trumpeter Jack Sheldon was born in Jacksonville, Florida, on November 30, 1931, and has lived in Los Angeles since 1947. Early on, he established himself as a resourceful trumpeter on the West Coast, gigging with Jimmy Giuffre, Curtis Counce, Dave Pell, Stan Kenton, Shelly Manne, Marty Paich and Benny Goodman and waxing many of his own dates for the Pacific Jazz, GNP, Reprise and Capitol labels.

He was active in the Hollywood studio scene throughout the sixties and seventies and can be heard on untold numbers of film and TV soundtracks including Henry Mancini’s Charade (1963), Johnny Mandel’s The Sandpiper (1965 – and the film’s hit “The Shadow of Your Smile”), Michael Small’s Klute (1971), John Williams’s The Long Goodbye (1973), Mandel’s Freaky Friday (1976, in which Sheldon also appeared with one of his sons), Tom Waits’s One From The Heart (1982) and Dave Grusin’s For The Boys (1991).

Sheldon also began acting in the mid-sixties, starting with Gilligan’s Island and garnering a major role on The Cara Williams Show. He is best known as Merv Griffin’s sidekick in the 1970s but is probably even more famous as the voice behind Schoolhouse Rock’s “I’m Just a Bill” (parodied by the man himself in the 1996 The Simpsons episode “The Day The Violence Died”) and “Conjunction Junction” (parodied again along with “I’m Just A Bill” by Sheldon on separate Family Guy episodes).

While critic Leonard Feather considered Sheldon’s “admirable trumpet in a style sometimes reminiscent of Miles Davis,” it’s hard to hear any of that at all here. Certainly none of the East Coasters like Miles (at the time) would have had much impact on Jack Sheldon. Pete or Conte Candoli possibly. Chet Baker maybe. I hear more of Sheldon’s inflections and stylizations in the playing of Don Ellis (1934-78), certainly a contemporary of Sheldon’s and another West Coast based trumpeter whose music went from jazz to TV and film.

”Nature Boy” as performed by Jack Sheldon on The Warm World of Jack Sheldon, arrangement by Don Sebesky and sitar by Don Robertson, who – like other musicians including bassist Don Payne – are not credited on the album.

For his first of two Dot albums, trumpeter Jack Sheldon is paired with arranger and producer Don Sebesky for a typical program of in-vogue pop covers (Bee Gees’ “Holiday,” Hugh Masekela’s “Grazin’ in the Grass,” The Beatles’ “With A Little Help From My Friends,” The Lovin’ Spoonful’s “Daydream” and Herb Alpert and the Tijuana Brass’s “More and More Amor”), film themes (Dusty Springfield’s “The Look of Love,” Neal Hefti’s “The Odd Couple,” Johnny Mandel’s “Emily”), pop-jazz standards (Frank Sinatra’s “In The Wee Small Hours of the Morning,” Nat King Cole’s “Nature Boy”) and Sebesky originals (“Forget,” “Sweet Talk”) that is anything but typical.

By this time, Sebesky, the former trombonist in the Stan Kenton and Maynard Ferguson orchestras and later one of the primary architects of “the CTI sound,” had already developed an authorial voice as an arranger, crafting some of the most elegant settings for singers like Chris Connor, Carmen McRae, Shirley Horn and Astrud Gilberto to jazz soloists Wes Montgomery and Toots Thielemans.

Here, Sebesky crafts one of his finest signature settings for Jack Sheldon, a player perfectly attuned to the arranger’s sensibilities for both jazz and rock music and an especially underrated and underappreciated sensitivity to spotlighting a good soloist.

The mood is intended to be smoochy candlelight fare. But the heat is a little more substantial than low-burn exoticism or passive easy listening. Even the album’s cover, featuring the handsome, then-svelte trumpeter lost in a golden field of summer’s burnt grass, hinting at a warm wind and an afternoon’s glow of romanticism, suggests something a little soppier and less substantial than the actual musical document. On the other hand, the cover’s serenity advocates the difference between something like this and the novelty hit-parade of albums that Al Hirt was producing at the time. This is some beautiful music which deserves to be far better known - not only for its inspiration but its sheer creativity.

There are many highlights throughout. The now well-known “The Look of Love” kicks the album off in a lush style that is stirred with Sebesky’s trademark use of vibes, harp, harpsichord and flutes to enhance the background string washes (Sebesky also arranged the song for pianist Craig Hundley in 1970). It is a lovely performance that fades at two minutes and 38 seconds, long before everybody has said all they have to say.

Sebesky’s own “Forget” is, pardon the pun, a remarkably memorable tune that evinces the composer/arranger’s delight with the Flamenco flourishes and viola and oboe wails that surface over and over again in his work (“White Rabbit,” “El Morro,” “Lament for a Fallen Matador” etc.). “Forget,” an instantly notable composition, has also been covered by violinist Jean-Luc Ponty on his 1969 album Electric Connection. But a really beautiful version of “Forget” was also recorded by fellow West Coast trumpeter Blue Mitchell in 1977 on the trumpeter’s Impulse album African Violet.

The other Sebesky original, “Sweet Talk,” is a catchy little number that is tremendously similar to “Up And At It,” a song credited to Wes Montgomery on the guitarist’s Down Here On The Ground (A&M, 1968), also arranged by Sebesky. “Sweet Talk” was paired with “More and More Amor” on a 45 RPM single, though which side was intended as the “play” side is unknown to me.

Together, Sheldon and Sebesky provide one of the warmest and most delicious takes of Neal Hefti’s “The Odd Couple” theme ever heard. This one is magical, with both the trumpeter and arranger pulling out their very best tricks to conjure a performance of true joy. One suspects that Sebesky was as well versed in Neal Hefti’s compositional approach (as well as the equally lush work Hefti provided to a handful of Hollywood films of the period) as Jack Sheldon was well aware of the work Hefti – who started in music as a trumpeter himself – did for Woody Herman, Harry James and, especially, Count Basie.

“With A Little Help from My Friends” is another of Sebesky’s ruminations on Sgt. Pepper’s Lonely Hearts Club Band (the other being his brilliant take on “A Day in the Life,” the title track to Wes Montgomery’s 1967 CTI debut). “A Little Help” captures Sheldon’s single most dazzling performance on the record. Sebesky jazzes up the basic pop tune, originally a vehicle for Ringo Starr, to sound like one of the big-band swingers of yore (hinting at the renaissance style he would adopt for Wes Montgomery’s Road Song the following year), licensing Sheldon to make the most of it with his finely honed chops and characteristically swinging playing.

Interestingly, Sebesky often finds an instrumental counterpoint on The Warm World of Jack Sheldon for the trumpeter. On the after-hours rendition of “In The Wee Small Hours of the Morning” (which Sebesky later arranged for Hank Crawford’s 1972 Kudu debut Help Me Make it Through the Night), Sheldon is balanced by a roadhouse (!) organ which seems out of context – but is perfect for the after-hours feel of the song. On “Nature Boy,” it is – surprisingly and uniquely – a sitar, expertly deployed by an uncredited Don Robertson, balancing a fascinating arrangement that certainly sounds like it gave Gary McFarland ideas of his own.

Interestingly, the album was recorded not on the West Coast but rather in New York City, the very first (and one of the only) under Jack Sheldon’s name to be recorded on the East Coast. Pairing this West Coast studio veteran with (unnamed) East Coast studio musicians is inspired. And the trumpeter himself seems inspired to yield to some of his loveliest work, playing around with some of Sebesky’s most engaging settings.

Sheldon and Sebesky teamed up again the following year for The Cool World of Jack Sheldon (Dot, 1969), an album notable for the debut of Sheldon’s singularly distinctive vocal stylings. But both Jack Sheldon and Don Sebesky went on to bigger and better things without The Warm World of Jack Sheldon - which has yet to see the light of day on CD - getting the proper attention it deserves as one of the finer jazz albums of its day.

Trailer for the documentary film Trying To Get Good: The Jazz Odyssey of Jack Sheldon.
Posted by Douglas Payne at 10:36 PM

Thanks for this, I first heard Jack on "This One's from the Heart" the unusual soundtrack from the unusual film of the same name.
His playing moved me, and I'm not much of a Jazz guy.