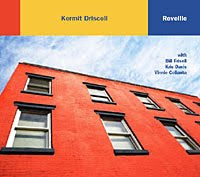 Bassist Kermit Driscoll is best known for his work in the 1990s behind such downtown luminaries as Bill Frisell (1987-96) and John Zorn (1988-94). He was also co-founder of the Knitting Factory collective New and Used, featuring trumpeter Dave Douglas, which waxed several records in the nineties.

But the bassist, who studied under Jaco Pastorius, has also performed with a wide swath of musicians from jazz greats Chet Baker and Toots Thielmans and pop stars Ben E. King and The Pointer Sisters to classical ensembles such as The New York Philharmonic and the American Composers Orchestra. He’s also a veteran of more than two dozen Broadway plays and spends much time in academia as well.

Driscoll (b. 1956) began by playing piano and only took up the bass when he was 13. He offers an approach that is not only uncommon to his instrument, but something that is remarkably refreshing. Kermit Driscoll is among the most supportive of bass catalysts – almost to a fault as he sometimes barely registers in the mix – but he has a minimalist sense of decorative spirit that is in turns lively and inspired as it is humorous and fun.

This is not to say he’s not a serious player or a player not to be taken seriously. On the contrary, he manages to convey a real love of what he’s doing with a sense of adventure that shows how much he really loves his work. There have long been too many bassists in jazz who want to scream their own importance as to dominate the music and thereby create something that is not at all musical. Kermit Driscoll is not one of them. He’s all about being part of the ensemble. He doesn’t rely on shopworn standards to prove it.

On the “better late than never” debut under his own name, Reveille (19/8 Records), Kermit Driscoll immerses himself in the utterly unique company of fellow Berklee College of Music grad, former boss and his acknowledged influence Bill Frisell on guitar, pianist Kris Davis (who, like Driscoll, often performs in drummer John Hollenbeck’s Large Ensemble) and the ubiquitous drummer Vinnie Colaiuta (Frank Zappa, Joni Mitchell and many GRP dates).

It’s a surprisingly cohesive unit that waxes and wanes on eight Driscoll originals, the questionably traditional “Chicken Reel” and a remarkably electric (in all senses of the word) take on Miles Davis and Joe Zawinul’s heady “Great Expectations,” credited here only to Zawinul and known from the 1969 recording heard on Miles Davis’ 1974 album Big Fun.

Driscoll’s compositions, such as they are, function more as sketches for improvisation than memorable melodies. The inspiration is often taken up most remarkably – and most predictably – by the guitarist, who sounds spectacular throughout, notably on the swampy blues swagger of “Boomstatz,” the straight blues of “For Hearts,” the lyrical “Farm Life,” the near melodic “Martin Sklar” (presumably named for the head of Walt Disney Imagineering) and the title track.

“Reveille,” the set’s closer, offers what is perhaps the group’s most effective interchange and surely some of Frisell’s loveliest playing. There is a nice sense throughout much of this 2009 recording of the creative improvisation that only happened in the late 1960s and early 1970s.

It’s a willingness to embrace the wild freedoms of what rock promised in the context of the exploratory improvisation jazz offered: no sound is out of bounds and no note can be misplaced. There’s also an understanding of a world outside of jazz and the cliché quotes of standard tunes and, thankfully, a sphere of listening that goes well beyond pop radio.

While Bill Frisell never recreates the sounds or styles he made on his own records with Kermit Driscoll, which ended some 15 years ago, it is interesting to note just how different Frisell sounds here compared to his appearances on other bassist/leader’s records like Marc Johnson (Bass Desires, Second Sight and The Sound of Summer Running), Viktor Krauss (Far From Enough), Gary Peacock (Just So Happens) and Ron Carter (Orfeu) – or even earlier recordings by Eberhard Weber, Arild Andersen and Gavin Bryars.

It is probably a warmer sound; almost bluesy at times. So fans of the guitarist’s storied appearances on drummers Jerry Granelli (A Song I Thought I Heard Buddy Sing) and Joey Baron’s (Down Home, We’ll Find Out Soon) albums will certainly want to check this out.

Sadly, pianist Kris Davis often seems either buried deep down in the mix or not featured near as much as she should be. Her dynamic lyricism strikes a fanciful meeting between what Steve Kuhn and Paul Bley were reaching for many years ago in their attempts to merge their thing with rock (peppered with Marilyn Crispell’s free-thinking romanticism thrown in for good measure) and is heard to prominently good effect on the marvelous “Hekete” and “Martin Sklar” only. One senses that pianist probably dominates the live performances of these tunes more than she does here.

Reveille may not be the call to arise that it was intended to be. But it certainly is cause to take note of Kermit Driscoll, who seems to have more to say on his first disc than its late appearance might suggest. More, Kermit, more.
Posted by Douglas Payne at 11:05 PM