Tom Scott “The Nine Lives of Fritz the Cat” 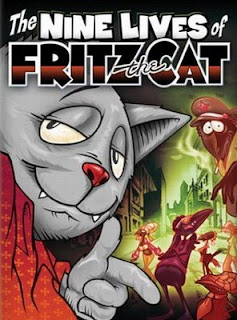 The 1974 sequel to Ralph Bakshi’s bizarre 1972 animated film Fritz the Cat is this equally wacky film, confusingly dubbed The Nine Lives of Fritz the Cat. Directed by Robert Taylor – a storyboard artist who has since gone onto things like The Flintstone Kids, Ducktales (1988) and The Rugrats Movie (1998) – this sequel is a trip, both as a story and as a film. And like many trips, it depends whether you consider it a good one or bad.

Substance abuse can certainly help give this supposed message – “this is about the worst life I’ve ever had” – some sort of significance.

The characters and the peculiar characterizations come from Bakshi’s original – a raunchy animated tone poem to the era’s more permissive mores – but are actually based on the creations of Robert Crumb, who was so infuriated by Bakshi’s film that he killed the cat off in his comic books. No nine lives for this Fritz.

Here the sex-crazed, too cool for his own good Fritz the cat is married and has a son. He survives by living off welfare and getting high all day long. While his infant son masturbates, his wife screams at him about how much of a loser he is. Oddly, it’s hard to see how she’s wrong. But since we’re supposed to side with Fritz, we journey with him as he tunes out her screaming in trippy daydreams and sexually, racially, socially and politically-oriented fantasies/flashbacks/delusions/what have you. 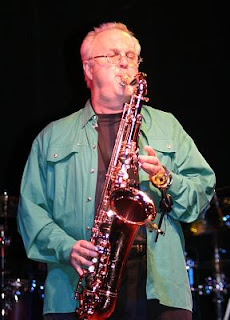 The score to The Nine Lives of Fritz the Cat was provided by Tom Scott, son of film and TV composer Nathan Scott (Twilight Zone, Lassie), in his fourth outing for a theatrical film and delivered by the saxophonist’s fusion group of the time, Tom Scott and the L.A. Express. It’s an excellent score, filled with some of Scott’s funkiest blues and some great playing not only from Scott but from everyone involved. Anyone who likes Scott’s two L.A. Express albums from the mid-1970s will certainly dig this film’s music.

The film is actually packed with music. Indeed, entire sequences unfold without dialogue, allowing Scott’s funk to add zest to the rather bland visuals. But while the film’s main title credits indicate that a soundtrack was available on Ode Records, no soundtrack album for The Nine Lives of Fritz the Cat was ever released.

It’s a shame, because there’s a lot of really good, funky music in the film, including bits this listener recognized as “Keep on Doin’ It’,” “Dirty Old Man,” "Backfence Cattin’,” and possibly even the great “Sneakin’ in the Back.” 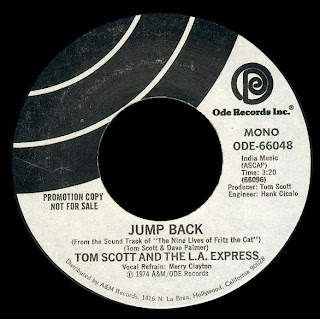 A single was, however, issued in July 1974 – presumably for “promotion only,” so copies of the record are probably exceedingly scarce – featuring “Jump Back” (aka “Jumpback”), with Merry Clayton on vocals, backed with the dazzling Max Bennett instrumental “T.C.B. in E.”


Tom Scott and the L.A. Express performing “Jump Back,” written by Tom Scott and Dave Palmer, with lead vocals from Merry Clayton.

“Jump Back,” which is much longer in the film than on the 45 (and even starts off with a riff that Scott later worked into his 1995 tune “Night Creatures”), accompanies a scene of Fritz, dressed in top hat and tails, sporting a cane, walking through many real images from the 1930s. The song’s lyrics are by Dave Palmer, a former vocalist with Steely Dan who contributed lyrics to Carole King’s 1974 Ode album Wrap Around Joy and its huge hit, “Jazzman,” featuring none other than Tom Scott.

The tremendous Merry Clayton, a former Raelette and the one who duets with Mick Jagger on the Rolling Stones' “Gimme Shelter,” helms “Jump Back” with assured aplomb: cool like the best of the jazz singers and funky like the best of the soul divas (she also was heard much on the radio in 1974 singing background vocals on Lynyrd Skynyrd’s “Sweet Home Alabama”). The song hovered at the low end of Billboard's Soul chart for about five weeks, disappearing from lack of interest (or, most likely, lack of proper promotion) completely from the radar in August 1974. 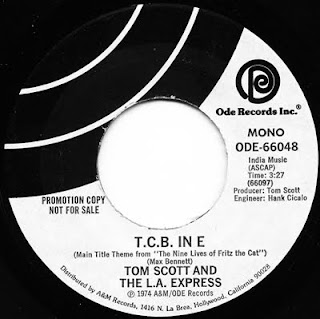 “T.C.B. in E” is the film’s terrific main theme, heard during the main titles sequence and each time Fritz drifts back to his nagging-wife reality. “T.C.B” could stand for “Takin’ Care of Business” or “Tom Cat Blues” – who knows.

Considering Tom Scott wrote the film’s score, it’s surprising that L.A. Express bassist Max Bennett, an old-school player who came out of the Stan Kenton band and the thriving L.A. studio scene and a talented player/composer who could do any kind of music admirably well, pens the main theme. But “T.C.B. in E” is an exceptional piece of electric improvisation and something that deserves even better than its high-cult reputation. Scott himself waxed a live remake of the tune for his 1999 album Smokin’ Section - curiously without Bennett, though.

Dave Palmer added lyrics to “T.C.B. in E” and came up with the film’s end titles sequence, “In My Next Life.” Presumably, Merry Clayton sings this too.


The vocal version of “TCB in E,” called “In My Next Life,” which was not issued on record.

It’s unlikely any of this music will ever see the light of day on CD. While the promotional 45 – and, presumably, the unissued LP – were the property of Lou Adler’s Ode Records, owned at the time by A&M Records, Ode was acquired several years later by Sony Music. So it’s probably unclear who even owns the rights to the music (my guess is Sony). But Tom Scott has neither the historic place in jazz – or film music, for that matter – today that he deserves nor one that would ensure anyone doing something to rescue this music for public appreciation.

Thanks to Tom Scott and the L.A. Express, The Nine Lives of Fritz the Cat has far more value as an audible pleasure than a visual one.
Posted by Douglas Payne at 11:50 PM

This soundtrack kicks ass. It's always been one of my favorites, and I've been looking to re-visit it for years.

I cannot thank you enough for this. I found Fritz the cat last year and I just found and finished watching a working copy of the 9 Lives this week. I have been searching, fruitlessly, for the entire day. Noone knoes about this move and even less about the music. I just ripped the music from youtube. Thank you SO much.

The song Jumpback lyrics may have been written by Tom Scott, but who wrote the music? The music is pretty much the same as the music of Towet of Power's What Is Hip? Which came first?

I wrote all of TCB in E !! Max Bennett

Where do I get the VINYL!! Soundtrack LP from THE NINE LIVES OF FRITZ THE CAT? I didn't find it at Amazon, DISCOGS or EBAY. There is only the single JUMP BACK with the shortened version.