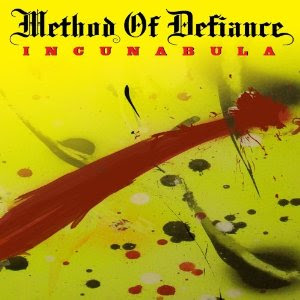 Method of Defiance (MOD) is one of bassist / producer / conceptualist Bill Laswell’s most recent – and perhaps most significant – musical projects. Apparently Method of Defiance is a “musical, sonic, aesthetic, mind and body experience, at once structured, spontaneous, precise, random, brash, beautiful and above all unforgivable.”

This could be Bill Laswell’s entire musical aesthetic: a no-bounds, no-holds barred assault that – like the best in jazz (electric and otherwise) – goes where his heart and spirit take us. Sometimes it falls within some sort of genre classification. But if it does, it sure doesn’t stay there long. Sometimes there’s a melody. Sometimes there’s a groove. But life isn’t always melodious and it isn’t always groovy. Neither is Bill Laswell’s music.

MOD is structured to be a conspiracy, an antidote to the “business of music” that locates trends and manufactures the most lucrative product. It’s crafted to be malleable and never easily pegged as one thing or another, at least not for long. The obvious reference point is the dub music that Laswell has long expressed a fondness (and a signature) for. But there’s enough jazz, funk, rock, avant garde and any number of other easily marked genres to keep listeners alert and occupied.

By the time of MOD’s next disc, the little-known Nihon (RareNoise, 2009), Laswell solidified the concept into a group project featuring himself on bass, former P-Funk man Bernie Worrell on keyboards, the remarkably interesting Toshinori Kondo on electric trumpet, Guy Licata on drums and Doctor Israel on vocals, electronics and dub.

While Worrell and Kondo had appeared on the earlier Inamorata, MOD seemed to be a solidified version of Laswell’s inspired Tokyo Rotation, also occasionally featuring Kondo, and a grouping (in its many forms) that – at least as far as I am aware – has not yet recorded as Tokyo Rotation (though plenty of videos of the group in performance can be seen on YouTube).

In October 2010, MOD issued Jahbulon, the first recording on Laswell’s recently launched MOD Technologies label. The album consists of ten tracks, led by vocalists Dr. Israel and Hawkman, combining Laswell’s trademark penchant mix of rock, dub, reggae and electronica. A month later, MOD Technologies issued Incunabula, said to be an instrumental version of Jahbulon, but really an album unto itself and far superior to its more-strongly oriented dub brother.

Amazingly, Incunabula reunites the MOD of Nihon, enhanced only by adding the turntables of DJ Krush, and comes up with something just as good, if not better (Nihon featured a seven-song studio set enhanced by an even better live performance of the group on DVD).

Opening with Bernie Worrell’s “Code Woo – Condensed Fiction/Volunteered Slavery,” a solo piece for organ and electronic keyboard effects, there is a strong sense of the way Elton John began his epic Goodbye Yellow Brick Road with the powerful opus “Funeral for a Friend.” It’s a magnificent way to announce what’s to come.

(As an aside, “woo,” which is enticing someone to get what you want, has long been a Worrell theme, developed on his first album, the 1978 P-Funk production All The Woo in the World, and even used as part of Worrell’s “Woo Warriors” touring band. Also, Rahsaan Roland Kirk’s uncredited “Volunteered Slavery” dates back to Worrell’s 1990 Funk of Ages album, coincidentally produced by Bill Laswell, and can also be heard briefly on Nihon.)

What comes next is the explosive and decadently hard-edged “Anachronizer (Asteroid B449),” a rip roaring, kick-ass jam credited to Laswell, Kondo and Worell. Seemingly an updated variant of the Miles Davis/Joe Zawinul classic “Great Expectations,” “Anachronizer (Asteroid B449)” finds this group at its best with each of the players providing worthy electric and fetchingly electrified commentary.

A pleasant surprise on this track (only) is hearing the gorgeous electric piano improvisations of Herbie Hancock, who with Chick Corea was one of the two electric pianists on the original 1969 recording of “Great Expectations” (issued on the Miles Davis album Big Fun and included as part of The Complete Bitches Brew Sessions).

“Quantum Echo” returns MOD to its dub heritage with a strong lead right out of an Ennio Morricone western and a fairly intoxicating trumpet solo from Kondo that again suggests Morricone’s plaintive trumpet work on Un uomo da rispettare (1972) and even Frantic (1988). “Codeplan Armoured (Stimulation Assassination)” isn’t terribly dissimilar, funking up what sounds like an outtake from a dub remix of a Morricone theme. But MOD give a weighty significance to the music with some inspired and interesting interplay, proving these guys are a good working unit – not just some cover band or a bunch of guys that exploit other people’s talents to cover a lack of their own.

“Umi No Soko” is a quiet reminisce of Miles Davis and Gil Evans’ 1960 classic Sketches on Spain imaginatively reimagined, not entirely unlike Miles Davis and Marcus Miller’s 1987 soundtrack to Siesta. The moody instrumentation here even closely resembles Siesta. But it should be said that Kondo, Laswell and Worrell bring something to this re-envisioning that make it worthwhile and, perhaps, even more of a notable contender for a sketch on Sketches than Davis himself provided on his own Siesta.

Bernie Worrell’s closing “Shadows of Woo (Re-Entering)” features the keyboardist alone again, naturally, on electric piano providing a surprisingly sweet melody that is as soulful as it is bluesy, but ends just as it seems to turn into something for the band to do something with. And surely at 40 minutes, Incunabula seems to end far sooner than a typical CD today would. It certainly finishes well before any listener would think this band had said everything it had to say.

It’s a little uneven, suggesting whole separate discs of “Anachronizer” styled jams, another of “Quantum Echo” or “Codepkan Armoured” dub and another of “Umi No Soko” jazz. And it’s surprisingly short for a band with such talent and great ideas. But Incunabula is certainly worth tracking down, even if it feels like it’s just not enough of any one thing.
Posted by Douglas Payne at 12:26 AM

Bill is looking now at the MOD concept as more than just a band per se, though the people on the most recent discs are essentially a band. The newly created MOD Technologies label is an attempt to bring back the Axiom aesthetic but for the 21st Century. All the releases will somehow involve members of MOD (Nihon was the genesis, but the band now officially consists of Bill, Bernie, Kondo, Doc., Hawk, Krush with the drummer chair in the air - I was told that people should consider MOD as an entity starting with Jahbulon. Everything before it is considered something else). There is a remix disc more or less done, containing mixes from both MOD Tech releases by Bill, Scientist, Dr. Israel and a few others.

Thanks for the clarification/ correction Dave and, as always, the great knowledge and insight you bring to the vast subject of Bill Laswell. Up next for me: "Aspiration," which will probably inevitably involve me picking up on "Life Space Death" with the great Toshinori Kondo.

Aspiration is nice. Hoping to get some clips up on my site of the new tracks from that one.

holy shit! this blog is awesome. this album sounds like the closest thing to praxis and third rail, some of my favorite albums ever. REALLY stoked to find out about this...

Do you need free Google+ Circles?
Did you know that you can get them ON AUTO-PILOT AND ABSOLUTELY FREE by registering on Like 4 Like?