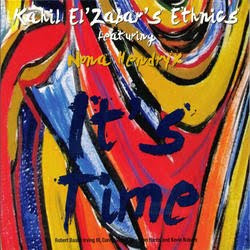 Chicago-based percussionist and multi-instrumentalist Kahil El’Zabar, a leading member of the AACM (Association for the Advancement of Creative Musicians) since the 1970s, has become well-known for the huge and fascinating body of work crafted in his groups Ethnic Heritage Ensemble and the Ritual Trio.

In addition to aligning himself with edgier jazz lights Wadada Leo Smith, David Murray and Archie Shepp, he has also played with Cannonball Adderley and Dizzy Gillespie, toured with (and designed outfits for) Nina Simone and even worked in such rock bands as Poi Dog Pondering.

With It’s Time (Katalyst Entertainment), Kahil El’Zabar convenes a new outlet for his restlessly creative spirit with Ethnics, an “electric improvising dance band” offshoot of the acoustic improvisational unit that is the still thriving Ethnic Heritage Ensemble. It’s an inspired mix that finds the leader indulging in a soulful brand of house music that far too many jazz leaders dismiss out of pocket.

El’Zabar insists he’s been playing this sort of music since the early days when it was known as disco. But It’s Time is hardly the first time he’s lodged a good groove. It’s just the first time it was all about the groove. He’s got a true feel for crafting fine dance music. And why shouldn’t he? Many a great jazz percussionist from Candido and Willie Bobo to Ray Barretto and King Errisson, dabbled in disco to dazzling effect.

Here, Kahil El’Zabar expands upon the groove with the help of Chicago-based trumpeter Corey Wilkes, who filled Lester Bowie’s seat in the Art Ensemble of Chicago and recorded with the Ethnic Heritage Ensemble on Mama’s House Live (2008); Chicago tenor man Kevin Nabors, who is also in Wilke’s Abstrakt Pulse band; the keyboards of Robert “Baabe” Irving III - who is best known for his work with Miles Davis from 1980 to 1990 and has also appeared with the percussionist on David Murray’s The Tip (1994) and Jug-a-Lug (1995); and the propulsive synth bass and percussion enhancements of Shannon Harris. Interestingly, Irving and Nabors are also heard with Wilkes on the trumpeter’s 2008 album Drop It (Delmark).

The leader raises the bar several notches here by adding the spectacular vocal talents of Nona Hendryx, veteran of Labelle, Talking Heads, Material and a sensational series of solo records issued between 1977 and 1992, the best of which remains the superb Nona (RCA, 1983). Hendryx apparently first met up with the percussionist on an unissued date from the 1990s that also included Jamaaladeen Tacuma and David Murray – and the two vowed they would work together one day.

Nona Hendryx makes this project sound like something different and rather better-than-average special, lending a surprising soulfulness to the proceedings that just about any other vocalist would be hard pressed to come up with.

It’s not the typically drippy ballad work of the faded guest star or the trying-to-prove-something screeching that so many divas think means soul. Like any other instrument in the ensemble, Nona Hendryx provides another “voice” in the group in her wondrously signature timbre, working with her collaborators to come up with something that ultimately delivers a good groove. Her interplay is sensational. It’s not a jazz singer keying off changes or scaling off bebop riffs. She provides something different, but something you want to hear and something that makes Ethnics click.

The program features five Kahil El’Zabar originals and three Nona Hendryx originals (“It’s Time,” “Love is a Flame” and “Same River Twice”), but it’s not so easy to tell whose pieces are whose. Each sounds like a work of group collaboration. The emphasis is on the groove, which is solid throughout. But, sadly, there is little up-front prominence on improvisation or the group dynamics that define so much jazz. Still, jazz is not the point here. There is improvisation…just not enough of it.

The set’s opener, “It’s Time,” is a spiritual groover in the Pharoah Sanders mold, mixing the saxophonist’s Impulse-era acoustic sounds (complete with Kahil El’Zabar’s Leon Thomas-like vocalisms, which also appear on this set’s “Dance in the Spirit”) with his later Verve-era electronic grooves. Interestingly – and not surprisingly - Kahil El’Zabar’s Ritual Trio recorded with Pharoah Sanders in 2000 for the Katalyst album Oooh Live!.

“I Follow the Sun” slows things down a bit more than expected and practically borders on that brand of romantic music now dubbed Northern Soul, with Irving’s organ bouncing around in provocative ways, suggesting some of Lonnie Liston Smith’s great space jazz of the mid 1970s on Flying Dutchman.

The set picks up with the out-and-out house groove of “Love is a Flame,” the first evidence of a real “song” here (one that could be as easily appreciated on radio as on the dance floor), offering some of Irving’s great keyboard virtuosity. From here, we traverse to the gospel groove of “Same River Twice,” another of the disc’s two or three highlights with Nona Hendryx channeling Mavis Staples and Robert Irving laying down some of the best piano he’s ever played (he rocks on “It’s A Good Day” too). The set closes with the band’s signature tune, “Paradise,” a strong tune that could be even better if it was turned into more of a song but one that offers some classically-styled horn work and good soloing from Irving and Wilkes.

The disc’s only real weakness is the quasi-rap of “Giant Steps,” which riffs on the legend of John Coltrane and is the one piece that Nona Hendryx is not even heard on. It’s sort of like that unbearable thing that Miles Davis experimented with on the terrible “Doo Bop,” which I always wondered whether Miles would have ever issued had he lived long enough. Kahil El’Zabar’s percussion is most prominent on “Giant Steps,” which makes it interesting. But it’s hard not to be bothered by the tune’s rather unnecessary vocals, which celebrates Coltrane’s legacy in words rather than song.

However, squabbles aside, It’s Time offers a mostly exciting program that one hopes promises even more great things from Kahil El’Zabar’s Ethnics featuring Nona Hendryx.
Posted by Douglas Payne at 12:43 AM

There is SHOCKING news in the sports betting world.

It's been said that every bettor needs to look at this,