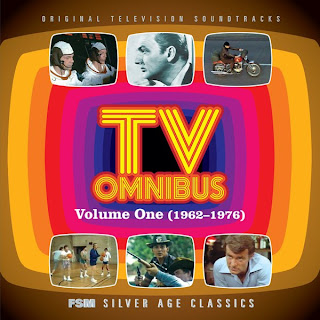 Eclectic in the extreme, FSM’s new five-disc TV Omnibus Volume One (1962-1976) assembles music scores from long-forgotten television films and series that were forgettable in the first place or just didn’t take off, for whatever reason.

So why bother celebrating TV that no one remembers or cares much about when so many great TV shows and scores hardly ever see the light of day in some readily accessible home-entertainment format?

The jazz orientation of so many of these silver-age composers makes this set even more compelling. Not only has hardly any of this music previously been available before in any format. It’s a sure bet that only the composers’ hard-core fans know this music even exists.

The connecting thread of all of this is Metro-Goldwyn-Mayer television, which initially hit its stride in the early 1960s with the wildly popular Richard Chamberlain/Raymond Massey medical drama Dr. Kildare (whose theme, sung by Chamberlain himself, kicks off the first of this set’s five discs).

MGM plucked many talented young composers of the time – those who wanted the work and worked cheap – to score many, many of these programs and some of the music MGM got certainly out-classed and outlived the actual shows the music accompanied. For proof, revisit FSM’s stunning three-volume, six-disc compendium of The Man From U.N.C.L.E. scores, featuring a heaping helping of great music from Jerry Goldsmith, Morton Stevens, Lalo Schifrin, Gerald Fried, Robert Drasnin and Walter Scharf.

There’s a hell of a lot of music on TV Omnibus too. Each disc rounds out at about 75 minutes. As an omnibus, it’s a musical smorgasbord, best sampled a little at a time. Not surprisingly, though, the music is genuinely amazing – and well worth the expense for any fan of any one of the composers featured here.

John Williams, still known as Johnny at the time, was somehow released from his Universal contract to score The Eleventh Hour episode of “The Bronze Locust” in 1963, the only known work he did for MGM. His dramatic music, totaling nearly 18 minutes, is a gorgeously dramatic work for 15 players: woodwinds, brass, piano and percussion. There’s some lovely Mancini-esque jazz that can be heard here too.

Leonard Rosenman’s score for the 1974 TV film The Phantom of Hollywood, uses a 24-person orchestra to combine certain atonal references with many insider nods to MGM scores of the past. While it’s a typical Hollywood score, the music certainly outstrips the hokey TV movie in feeling and class.

Don Ellis scored the fact-based The Deadly Tower (1975) for 16 strings, four woodwinds, two keyboards (piano and synthesizer) and two percussionists. Surprisingly, Ellis, himself a trumpet player and leader of a very brassy orchestra, includes no brass in this hypnotic, haunting and rather remarkably compelling score. Ellis deserves more credit for what he brought to music. Thankfully, TV Omnibus helps make that happen.

Dave Grusin gets a full disc and some change for his music to a short-lived Robert Conrad action show called Assignment: Vienna, the series that derived from the 1972 pilot Assignment: Munich, whose George Romanis main theme is also included here. Grusin provides some truly magnificent music, mostly in a jazz context (“Jake’s Theme”). Among musicians featured here are Grusin on piano, Fender Rhodes, electric harpsichord, organ, Tom Scott on sax and flute, Chuck Domanico on bass, Emil Richards and John Guerin on drums/percussion and Ken Watson on the very distinctive Eastern European cimbalom, which John Barry memorably popularized in The Ipcress File and Quincy Jones brought to TV on Ironside.

Grusin’s “The Last Target” is scored for 22 musicians, making heavy (almost too heavy) use of the cimbalom. “Hot Potato,” scored for 16 musicians, gets quite a bit funkier, heading toward the territory that Grusin would patent as his own on Baretta and Three Days of The Condor. For “A Deadly Shade of Green” Grusin returns to a more jazz-based setting, with some of his typically melodic flourishes added in for good measure. Composer John Parker (Cannon) provides two more conventionally-based, but still interesting scores for the show (and the great title “Maria Schell Is Mad As Hell”) – which suggests a two-disc set dedicated only to the obscure Assignment series may well have been justified.

Jerry Fielding’s music to the 1973 TV film Shirts/Skins and its unaired 1974 TV pilot incorporates “Sweet Georgia Brown” (also adopted by The Harlem Globetrotters as their theme song) with some of the tense, nearly militaristic music that Fielding had become known for in such features as Straw Dogs, The Wild Bunch and The Mechanic.

All of disc four is given over to three scores from the innovative, yet barely successful Then Came Bronson (1969-70) series – something of a living-room precursor to Easy Rider. George Duning provides a traditional, Hollywood-style film score to the pilot film that seems to clash significantly with the rebellious nature of the show. Gil Mellé provides a more jagged approach for the two scores he provides to the show that is unusual for his otherwise experimental nature but curiously satisfying as a polite affront to typical Hollywood scoring. Mellé’s music is cryptically beautiful and not easy to appreciate with just one listen – jazz in its deepest and most loving sense: taking it all in and coming out with something new and different.

Lalo Schifrin’s score to one of his few science-fiction films, Earth II, a 1971 TV film that was intended as a pilot for a TV series that never happened, is a magisterially near-atonal classic that has much going for it. Scored for a 35-piece orchestra, which is only sparingly employed in full, Schifrin builds up tension and suspense with the most economical of ideas – often little more than two varying instruments displaying a sort of point/counterpoint activity. It’s brilliant and well worth investigating; surely among one of Schifrin’s strongest scores from the period, alongside THX 1138, another of Schifrin’s few sci-fi scores, recorded only six months later.

Finally, the great, prolific and highly underrated Billy Goldenberg provides a pretty terrific score to the 1976 Victor Buono TV film High Risk. Considering the ludicrous story, Goldenberg provides a straight-faced action/thriller score worthy of much more serious and seriously-considered fare in the then-hip conspiracy thriller genre. In fact, Goldenberg’s score out flanks any of the James Bond scores being cookie-cut out at the time and confirms the notes writer’s assertion that “High Risk demonstrates, again, that top composers were constantly creating interesting music for television in that era.”

The great Jon Burlingame - who annotated the earlier U.N.C.L.E. sets as well - provides a typically witty, incisive and erudite set of notes that spans a comprehensive 20 pages of the CD’s booklet and witnesses an unrivaled knowledge of not only the obscure TV shows included here but a very detailed and readable understanding of the music that accompanied each of the shows.

TV Omnibus Volume One (1962-1976) may seem to be too much of a good thing. But surely anyone who wants just one of these scores will certainly feel the entire set’s cost is justified by the availability of just that one score. What I wanted here and what I ended up discovering certainly made the purchase (about $12 per disc) worth the effort for me. If you like the music of any one of the names featured here, you’ll feel the same way too.
Posted by Douglas Payne at 10:57 PM