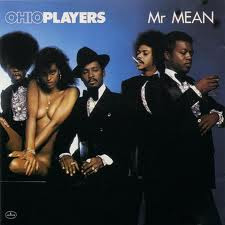 Williamson had already produced and directed three independent films with fairly sizable Hollywood talent by the time he came to Mr. Mean. But while no big names featured in this particular outing, the music – and the presence! – of the Ohio Players in the film makes the whole thing surprisingly notable and more memorable than the passage of time has allowed.

A soundtrack album was quietly issued on the Ohio Players' label, Mercury Records, in 1977, very shortly after the band’s more typically-styled album, Angel, was issued – even though the film probably didn’t play anywhere outside of major urban markets (probably NYC, LA and Chicago – it certainly never appeared in my Pittsburgh suburb at the time).

Looking less like a soundtrack and more like one of the Ohio Players’ typically provocative sexy funk workouts, Mr. Mean, which is billed as a soundtrack in small print on the gatefold record’s back cover, is a whole different side of the Ohio Players – and one that anyone who likes the slick jazz and swift funk amalgam this band could generate behind its other concerns will truly appreciate.

There is a refreshing and rather surprising intolerance to court an AM radio hit on Mr. Mean, although the most poppish of the bunch, “Good Luck Charm,” was broken into two parts for a 45-rpm release (Mercury 73974) and a dramatically edited version of “Magic Trick” (3:29), was issued as a 45-rpm record backed with a similarly edited version of the album’s title track (3:30) for Mercury 73983.

Still riding high off their hits “Fire” (1975) and “Love Rollercoaster” (1976), the Ohio Players would never have seemed the obvious choice to “score” a film. By 1977, the hits thinned out a bit, although urban radio stations still bristled with their ever-cool and ultra-slick hits “Far East Mississippi,” “Who’d She Coo” and “Body Vibes.” Only the hardiest of fans knew this album ever existed (I bought it when it was first released) and by the group’s next record, Jass-Ay-Lay-Dee (Mercury, 1978), hardly anybody was paying attention to the Ohio Players, sublimated by disco’s overthrow of the market.

But Mr. Mean had something gloriously interesting to offer: a program that offered jazz, soul and funk in equal measure while still trading in the obligatory throws of subtle disco dressing.

“Mr. Mean” and the long, nearly Grusin-esque “Magic Trick” are disco-jazz grooves that would not put off any of the group’s fans at the time, with silly, perfunctory lyrics that are easy enough to ignore but containing grooves a plenty that aren’t to be as easily dismissed (particularly the brilliant “Magic Trick”). Satch also wails beautifully in a King Curtis sort of way on “Magic Trick.”

Despite its nearly ten-minute length and jazzy flourishes (after-hours keyboards, sexy guitar and Satch’s Sonny Rollins’-like tenor), “Good Luck Charm” is the most obviously radio-friendly number of the bunch, retaining enough jazz to stay interesting to instrumental enthusiasts but hanging on to enough of a hook to matter to radio listeners interested in a quick fix.

“The Big Score” is remarkably well orchestrated funk jazz (with minimal vocals) that mixes some of then-in P-Funk cool with forthcoming Downtown cooler (Eno, Byrne, etc.) and the album’s single greatest moment comes at the end with the sinewy jazz funk of “Speak Easy” - probably devised as a source cue for one or more sequences in a bar - which recalls the grand tradition of the monster “There It Is,” a funked-up instrumental jam first issued on the 1995 Ohio Players compilation Funk on Fire: The Mercury Anthology (as well as the various-artists compilation Move To Groove: The Best of 1970s Jazz Funk), an early take on the finalized “Far East Mississippi.”

The Players explore some Latin motifs here and there, which again is probably meaningful to the film, and it comes out most notably on “Fight Me, Chase Me,” an exploratory Latinate jazzer that trades off multiple percussion and electronic keyboards in an appealing disco manner.

While the horn arrangements are tight (the perfect name of the OP’s publishing company at the time) as hell throughout, Billy Beck’s work on a stunning array of keyboards and James “Diamond” Williams's spectacular kit work on drums and percussion stand out most from the very first listen through any subsequent enjoyment of this musical mélange. These guys should be appreciated more for the way they arranged and performed a tune than the way they could score a hit.

Mr. Mean is probably the most difficult of the Ohio Player’s mass-produced Mercury recordings to find, having sold poorly at the time it was issued on LP and issued on a long out-of-print Japanese CD in 1994. But the entire nine and a half minute “Good Luck Charm” is included on the Funk on Fire: The Mercury Anthology (and the subsequent serial anthology Ohio Players Gold). But, sadly enough, “Good Luck Charm” is not at all representative of what Mr. Mean accomplishes during its 40-minute playing time – something that feels like it should be double what it is.

Wish there was more of Mr. Mean.
Posted by Douglas Payne at 11:24 PM

As a personal friend of Billy Beck and Leroy "Surgarfoot" Bonner, it would be easy for me to give this lp a thumbs-up just on that fact. However, your assesment of this album is so on point that I will simply co-sign and stamp with approval the truths that you have outlined. I happened to also know that Mr. Beck score the majority of the album with a powerful assist from Sugarfoot's composition of "Good Luck Charm". The movie was not release into enough markets and the album was not released to the standard that other O.P. projects. Nevertheless, we who have heard the "Mr. Mean" album know that it stands as a time test standard. Peace, Hubert "Yub" Clardy, Jr.

eToro is the ultimate forex broker for newbie and professional traders.