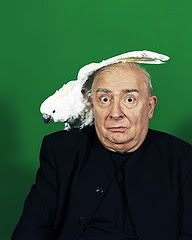 He followed this up with a series of arthouse films including Les Cousins (1959), Les Bonnes Femmes (1960) and Les Godelureaux (1961) before shifting to more commercial material in the mid-60s such as the spy thrillers Le Tigre aime la chair fraiche (1964) and Le tigre se parfume à la dynamite (1965).

The Chabrol style is something I admired deeply as I loved his films Betty (1992), the troubling L’Enfer (1994), The Flower of Evil (2003) and, most particularly, a sterling adaptation of one of my favorite Patricia Highsmith thrillers, Le cri du hibou/The Cry of the Owl (1987). The troubling undercurrent of emotional connections and disconnections made any Chabrol film a compelling if not always satisfying experience.

He directed some of the world’s finest actors and even filmed some of his work in English with such well-known American actors as Orson Welles, Anthony Perkins, Jodie Forster and Jennifer Beals. He was honored with a Life Achievement Award at the 2003 European Film Awards and continued to enjoy a prolific career spanning half a century, with his final film Bellamy released in 2009.
Posted by Douglas Payne at 9:15 PM

Duly noted, Alain. Thank you. "La cérémonie" is another Chabrol beauty and I was remiss to neglect acknowledging son Matthieu's magnificent musical contributions to his father's films.

Can't blieve you've overlooked the excellent soundtracks and musical works by Pierre Jansen, who was to Chabrol what Hermann was to Hitch...