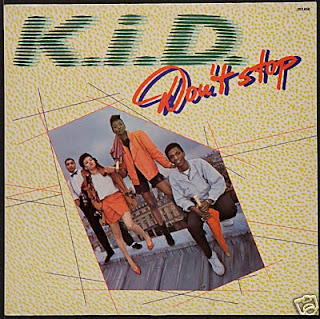 Today’s disco discovery: K.I.D. is the disco project of Geoff Bastow, a (British?) composer of a lot of library music for the Programme, Bruton, Sonoton and APM libraries. He’s also a session guitarist and keyboardist who’s best known for his work in many of Giorgio Moroder’s Munich-based disco productions (Donna Summer, Munich Machine). He also appeared as part of producer Pete Bellotte’s much maligned Elton John album, Victim of Love, even contributing one of the album’s better tunes, “Born Bad.”

“You Don’t Like My Music” originates from an album by “The Kids” called Number One, issued in Italy in 1980 on the Esquire label. Though recorded at Union Studios in Munich, the music is thought to be of Italian origin, perhaps because of its first release in Italy.

But, apparently, the exact same music was repackaged in 1981 for the Groove label in Germany, the Baby label in France (and Italy?), the Excalibur label in the UK, the Ariola label in Holland, the Unidisc label in Canada and the SAM label in America as the “K.I.D.” album Don’t Stop. The album also features the American Gigolo-esque title dance classic and “Number One.”

“Hupendi Muziki Wangu?! (You Don’t Like My Music)” was a British single and twelve-inch record, which explains why it became a sort of underground dance hit there (it is also featured on the great Horse Meat Disco CD of 2009).

But for some reason, “Hupendi Muziki Wangu?! (You Don’t Like My Music)” turned up as the B-side to the ultra-catchy K.I.D. single and twelve-inch of the nearly unknown “It’s Hot (Take It To The Top)” here in the U.S. – issued during a time when hardly any American at all was interested in hearing disco and probably explains why hardly anyone in the states knows about it.

It’s a terrific disco instrumental, a pax-de-deux for electric keyboards and guitar, highlighted by a sinewy percussive groove, great horns and lovely strings – all the things that make a disco dalliance a complete classic!

Bastow’s K.I.D. followed up Don’t Stop with 1982’s Fine Time Tonight (Baby), also recorded in Munich, featuring the dance singles “I Wanna Piece of the Action,” “Can’t Get Enough of This” and “Watch Out,” before Bastow went back to the libraries.

Like so many of the other extraordinarily talented composers who come out of the musical libraries, Geoff Bastow is worthy of further investigation. “Hupendi Muziki Wangu?! (You Don’t Like My Music)” confirms it. Thanks to Paul Conway for the reminder.
Posted by Douglas Payne at 7:59 PM

First ever house record? What an awesome groove.

college-party-guide One of the most important rituals for students in college is to throw the most memorable student dorm celebration.
gigolo The term”gigolo” usually refers to the person who lives an arranged lifestyle that includes many of these relationships in a series, rather than having any other support system.
sniffies Sniffies isn’t bookmarked on my phone, however I’ve been logged in enough that the web target will auto-complete on my personal browser.
erome However, there’s a challenge with streaming online. There are some limitations when streaming online videos. We are limited by the speed of internet, access to internet and other internet-related issues.