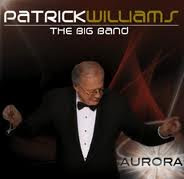 Composer and long-time band leader Patrick Williams (b. 1939) has finally issued his first big band album since 1998’s Grammy Award-nominated Sinatraland (nominated for his sterling arrangement on “In The Still Of The Night”).

Aurora is meant to follow in the tradition of the composer’s Grammy-winning Threshold (1973). But it’s different in many, many ways. First, while Threshold successfully married jazz and classical tropes with then-in rock rhythms and instrumentation, Aurora is straight-ahead big-band jazz in the Basie/Ellington tradition of the fifties – a period very few traditionalists even revisit anymore.

Sure, there are some bows to popularity such as the occasionally electrified instrument and the sporadically groovy rhythm. But like the great leaders of the bands of yore, Williams simply concedes to appeal to contemporary listeners. He’s probably never done a better of job of doing just that than he has here.

Additionally, Threshold was recorded, much in the style of the time, by layering parts in different recording studios in California and New York over time: solos over sections over rhythm, etc. Aurora was recorded live in Capitol’s famed Studio A in single takes over two days in August 2010 with a group of West Coast studio players (all in the same room) that know each other – and Patrick Williams’ music – very, very well.

Strike me down if Aurora doesn’t finally win the composer the long deserved accolades and multiple awards he has so deservingly earned over his half century as a significant contributor to jazz, pop and film music.

Aurora is a musical masterpiece that shows big-band jazz can still say interesting things – some half century after Downbeat asked if the big bands were dead – and sits exceptionally well alongside (if not above) such other great big-band works the composer has launched with Dreams and Themes (1983), 10th Avenue (1987), Sinatraland (1998), the soundtrack to Blonde (2001) and, of course, Threshold (1973), surely one of the greatest orchestral jazz albums of the seventies.

While far too many critics often dismiss jazz music made by folks in the film and TV music business – even if the composers, like Patrick Williams, come out of jazz – it’s hard to slight the jazz credibility present here. This is not only imaginative jazz – and, really, how many people are making imaginative jazz these days? – it is top-shelf jazz: fun, swinging (helmed by the great Peter Erskine, who is the absolute go-to guy for good swinging jazz big band music these days), melodic and filled with good improvisation from great players and some truly fabulous writing.

The great Aurora has been issued by the innovative cooperative label ArtistShare, which has also reissued CDs of Patrick Williams’ landmark Threshold and Sinatraland. I love every note of this music but my favorite moments here are “Song for a Pretty Girl,” “Mandeville,” “Heat,” “Fanfare for a New Day” and “Aurora.”

While my purchase of Threshold from ArtistShare allowed me to download Aurora in its entirety for free, I have already purchased Aurora on CD. It’s that good. It’s that great. Songs:

I just purchase Aurora after hearing the cut, "Heat" on Satellite radio. This album should be promoted more to the general public. I found it to contain a mixer of some of my all-time favorite sounds of musical artists including Brubeck, Rich, and even Ferguson. I have listen to it several times since receiving it and would like to personally thank Patrick Williams not only for his talent, but his ability to pull such fine musicians together. BRAVO!!!

Since I owned a record shop and carried the Capitol lp "Threshold" I knew Patrick Williams was kin to Quincy Jones and Henry Mancini, because the arrangements, and music selections were definitely jazz...no big band...no pop, anyway when I played it in shop I sold out week after week.
The sad truth is Williams' discography is almost top Secret since few "complete" catalogs exist with any music source for purchase. I hope this gem does not fallto the same fate as most earlier efforts.