Mason Brothers “Two Sides, One Story” – Album of the Year? 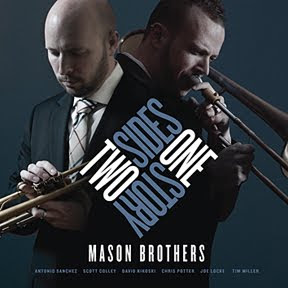 This is one of the finest new albums I’ve heard in at least the last five years. It immediately struck me and is absolutely worth hearing. Such straight-ahead jazz rarely sounds this original anymore. While it all hovers somewhere in Miles Davis’s E.S.P. territory, the instrumentation, headed up by trumpeter Brad Mason and trombone Elliot Mason, give it all a new spin that is satisfyingly engaging. I’ll let the renowned Terri Hinte take it from here:

The Mason Brothers — trumpeter Brad and trombonist Elliot — have been making music together since they were kids in Norwich, England. Both came to America in the early 1990s on scholarships to Boston’s Berklee College of Music and, after graduating and relocating to New York City, have distinguished themselves in a number of challenging musical settings — Elliot with the Mingus Big Band, Count Basie Orchestra, Maria Schneider Orchestra, and, since 2007, the Jazz at Lincoln Center Orchestra directed by Wynton Marsalis, and Brad with Natalie Cole, Mike Stern, Randy Brecker, Lionel Loueke, the Mingus Big Band, and, since 2007, singer-songwriter John Mayer’s band.

Now, at long last, the brothers have gotten together to release a self-produced CD of their own straight-ahead, cutting-edge jazz, due out October 5 on their Archival Records label. Five of the eight tunes on the Mason Brothers’ Two Sides, One Story, were penned by Elliot, including “Stage Pints,” a clever anagram for “Giant Steps” on which the melody of the famous John Coltrane composition is played backwards over the song’s original chord changes. Brad and Elliot collaborated in writing the remaining three selections.

“We had our ideas of who we thought would be the perfect cast for this project, but we didn’t think that we’d get them all in one room together at the same time,” says Elliot, 33. “And somehow we found a couple of days in September of last year that worked for everybody.”

In his booklet notes for Two Sides, One Story, Wynton Marsalis says of Brad and Elliot, “These brothers have a true bond and closeness unscarred by any kind of rivalry or smallness that has become the legend of brothers since Cain and Abel.”

Although sibling rivalry is absent, Brad and Elliot do not think entirely alike musically. This is especially evident on the title track, in which the melody is first played passively, then aggressively, to create a Dr. Jekyll/Mr. Hyde-type effect.

“Even though we may love the same music, we have a different way of playing,” says Brad, 37. “If we played very similar, it wouldn’t work. The fact that we have these very different sides in our own playing, I think, helps us to take the music in slightly different directions.”

Barry Mason, Brad and Elliot’s dad, played trumpet and trombone and began giving both boys trumpet lessons before they started grade school, although Elliot switched to trombone at age 7. Their mom, Christine Vance, was a jazz singer. The brothers grew up regularly hearing records by the like of Miles Davis, Chet Baker, Dizzy Gillespie, and Duke Ellington being played around their house in Norwich, about 100 miles north of London. Both played in English dance halls, theaters, clubs, and pubs before coming to the United States as teenagers to study at Berklee, Brad in 1991, Elliot in 1993. Both graduated in 1996 and moved to New York City.

The history of jazz is filled with a number of famous siblings, among them Johnny and Baby Dodds, Jimmy and Tommy Dorsey, and the brothers Heath, Brecker, and Marsalis. With the release of Two Sides, One Story, which stands as one of the most fully-realized debut recordings to come along in some time, brothers Brad and Elliot Mason are on their way to joining these stellar ranks.