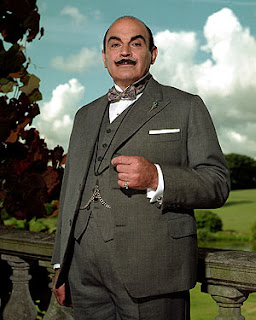 In previous posts, I’ve tried to comment on the entire ITV series Agatha Christie’s Poirot, taking in each and every episode on a seasonal basis. The twelfth series, which is alleged to have begun broadcasting on American TV back in December 2009, has not yet been made available on American or British DVD - though, inexplicably, there is a Region 2 Dutch set that makes the complete 12th season available.

This may, perhaps, be due to the fact that some of the episodes in this series have not yet been broadcast in their respective countries and, certainly, American DVD manufacturers have never gotten the Poirot series right.

But one of the episodes in this series is an adaptation of one the author’s most famous stories, the highly anticipated Murder on the Orient Express. Here in the United States, the hour-and-a-half long film has been broadcast on public television (which is where I saw it), issued on DVD as part of the Agatha Christie’s Poirot: The Movie Collection, Set 5 (Acorn Media, July 2010) and, most remarkably, has been promised as a stand-alone Blue Ray issue, again from Acorn Media, for October 2010.

Since it has appeared, the new adaptation of Murder on the Orient Express has proven to be highly controversial; more controversial, in fact, than almost every other film in the entirety of the 21-year history of the mostly superb Poirot series.

It is for this reason that I’ve opted not to wait to view the other episodes in this series and post my thoughts on Murder on the Orient Express right away. I hope to report on the series’ other episodes (the intriguing The Clocks, Three Act Tragedy and a personal favorite, Hallowe’en Party) as soon as they become available to me on DVD. 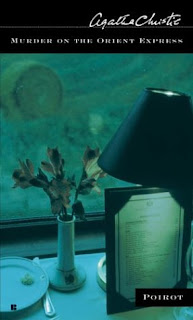 4. Murder on the Orient Express (first broadcast July 11, 2010): After he finishes resolving a case in Syria, Hercule Poirot is suddenly summoned back to England to conclude a case he began there earlier. He attempts to book passage on the Orient Express train in Yugoslavia back to London, but finds that all of the first-class accommodations are taken, a surprising turn of events since it is winter, an off-season for travelers. Remarkably, Poirot meets the train line’s director, M. Bouc, who helps the Belgian detective secure accommodations aboard the Orient Express. While on the train, Poirot encounters the many passengers who have filled the train, including Mary Debenham, an English governess; Colonel Arbuthnot, the strong, silent type; Mr. Samuel Ratchett, a mysterious American who has recently decided to spend his leisure years in travel; Hector MacQueen, Mr. Ratchett’s secretary; Edward Masterman, Mr. Ratchett’s valet; Antonio Foscarelli, an Italian who is thought to have suspicious connections; Princess Dragimiroff, a Russian grand dame; Greta Ohlsson, a Swedish nurse; Mrs. Hubbard, an American matron; Hildegarde Schmidt, the Russian Princess’s maid; and the Count and Countess Andrenyi. Aboard the train, Mr. Ratchett approaches Poirot to ask his protection from someone who is threatening him. Despite promises of “big money,” Poirot refuses to help Mr. Ratchett. During the night, the train is stopped by a large snowdrift between Vincovici and Brod. And then in the morning, Mr. Ratchett is discovered dead, the victim of multiple stab wounds. It is determined that the murder happened sometime during the night and a number of clues are discovered in Ratchett’s compartment, including the remains of a burnt note that indicates the ominous phrase “…member little Daisy Armstrong.” Poirot immediately knows the true identity of the victim. Ratchett is a man known as Casetti, an American who kidnapped and killed the daughter of a wealthy American family, the Armstrongs, and was moving throughout Europe, hiding from his would-be captors. Poirot understands that the murderer must be among the passengers on the train, because no one could have boarded and left the train during the snowstorm. As he begins to learn more about each of the potential suspects, he discovers that no one is telling the truth about whom they are and why they are traveling on the Orient Express.

First published in 1934, Murder on the Orient Express was presented in the US as Murder in the Calais Coach (the actual coach on the train where the action takes place) to avoid confusion with the 1932 Graham Greene book, Stamboul Train, which was published in the US as Orient Express. The interesting, though slightly disappointing, story is one of the author’s most popular and is based on two significant events: the kidnapping and murder of Charles Lindbergh’s young son in 1932 (and even the suspicion of the maid’s involvement and her eventual suicide) and the fact that an Orient Express train – which Agatha Christie had first traveled on in the fall of 1928 – was trapped for six days by a blizzard in Turkey in February 1929. It makes for a gripping read until the reader discovers, fairly late in the game, that not only no one person could have possibly committed the crime but, more importantly, the book is nothing but a recollection of lies, a preposterous number of alternate identities and too many clues that are all simply red herrings. Ingenious though it may be to craft such a riddle of a tale, so much misdirection cannot help but become confusing and tedious – especially given the surprise ending which renders nearly all of the preceding text practically meaningless.

While the everyone-did-it nature of Murder on the Orient Express is the complete opposite of the author’s most popular novel, the everyone-gets-killed And Then There Were None (1939), it could be said that the story shares the same conspiratorial framing device used for the Christie novels The Hollow (1946) and At Bertram’s Hotel (1965), where everyone lies for various reasons and the detective has to, more or less, guess at what’s really going on and, of course, gets it all right. Poirot’s initial deduction about the true identity of the murder victim is preposterous in the extreme, but allows the detective to reasonably piece together the real identities of the train’s other passengers – an unlikely assemblage of people from too many different walks of life to reasonably know each other and all of whom remarkably know Mr. Ratchett’s true identity when no one else does.

Murder on the Orient Express was first filmed in 1974 by director Sidney Lumet (12 Angry Men, Fail Safe and, later, Dog Day Afternoon, Network, The Verdict and the Agatha Christie-like Deathtrap) with an all-star cast including Sean Connery, Lauren Bacall (Appointment with Death), Ingrid Bergman, Jacqueline Bisset, Martin Balsam (who, coincidentally, starred in a 1976 TV film The Lindbergh Kidnapping Case), Jean-Pierre Cassel, John Gielgud (Appointment with Death, The Seven Dials Mystery, Why Didn’t They Ask Evans) , Wendy Hiller (Witness for the Prosecution), Anthony Perkins, Vanessa Redgrave (Agatha), Michael York, Colin Blakley (Evil Under the Sun), Denis Quilley (Evil Under the Sun), Richard Widmark as Mr. Ratchett and Albert Finney in a ridiculously overstated performance as Hercule Poirot. Remarkably, the elegantly-staged film represents the novel exceedingly well with a reverentially pitch-perfect script by Paul Dehn (Goldfinger, also with Sean Connery, The Deadly Affair, also by Sidney Lumet and several of the Planet of the Apes films) and was the first film adaptation Agatha Christie agreed to after years of what she considered to be poor adaptations of her work. The author, who attended the film’s 1974 premiere, apparently approved and even found Finney’s overdrawn performance as Poirot acceptable. Finney, who was the producers’ third choice for Poirot after Alex Guinness and Paul Scofield had both refused, declined a reprise of the role of Poirot for the 1978 film Death on the Nile due to the large amount of make-up the role required and the thought of filming in the arid climes of the story. Peter Ustinov took the role for the film and played Poirot in two more feature films and three contemporary TV films.

Perhaps the less said about the 2001 CBS-TV film version of Murder on the Orient Express - with Hercule Poirot portrayed by Alfred Molina (in un-pressed linen suits no less!) in present-day surroundings that allow the inclusion of cell phones, PDAs, laptops and the Internet as well as unnecessary references to Ross Perot (get it?), O.J. (!), Donatella Versace and Brad Pitt – the better. While Christie’s basic story is maintained, almost everything about the TV movie is, at a minimum, ill-conceived, and, at its worst, just plain bad.

The long-awaited 2010 film with David Suchet’s perfectly definitive Poirot is, surprisingly, quite a disappointment too. The elegance of the 1974 film is replaced here by director Philip Martin’s astonishingly average presentation. Filmed in Malta aboard an obviously inelegant train, Martin relies on an annoying overabundance of hand-held camera work obviously meant to provide a sense of documentary relevance and refracted imagery that doubles everything like a distorted view through beveled glass. Get it? The obvious symbolism merely masks what feels like a presentation lacking in many ways. Suchet’s performance is, as expected, magnificent, although for the first time, his presentation here suggests a certain weariness (or disgust?) with the part not present before. Even though his dark, gravely performance well outshines Albert Finney’s hysteric, near comic presentation some four decades before, Suchet’s Poirot has never appeared this pious, this angry or, frankly, this unbelievable.

As scripted by Stewart Harcourt, who wrote the wacky Marple films A Murder Is Announced (2005), By The Pricking of My Thumbs (2006), Ordeal By Innocence (2007) and The Blue Geranium (2010) as well as the 2009 Poirot film The Clocks, this Murder on the Orient Express is unusually heavy in the conflicted and conflicting philosophy of rough justice and, most regrettably, the religious overtones that unnecessarily weighted down the 2008 Poirot film of Appointment with Death. A lot of Christie’s meticulous detail – and the abundance of clues – is dropped in favor of some bizarre and heavy-handed dialogue about God and justice that do nothing to enhance the story. Indeed so much superfluous philosophy is inserted into this presentation that Poirot’s sudden dénouement laughably comes across as little more than divine guesswork.

One of the things the 1974 film is particularly notable for is presenting the whole Daisy Armstrong story up front (through a montage of blue-tinted newspaper headlines). This helps the viewer – particularly one so removed from the actual events that inspired the story so very many years ago – understand the following sequence of events. Like Christie’s novel, the 2010 film unwisely moves this information (presented through a montage of red-tinted newspaper headlines) back to Poirot’s revelation of Daisy Armstrong’s relevance following Ratchett’s murder. It’s a small point. But it reflects the lack of understanding the film’s producers have in presenting the story in visual terms appropriate for the medium and their lack of success in proffering a story of emotional retribution in strictly moral and religious terms.

The mostly unknown cast does a pretty decent job fulfilling its various roles, at least as they are written here. Like David Suchet’s Poirot, though, it is a grave injustice that they just weren’t given more or better material to work with – particularly for one of Hercule Poirot’s best-known adventures. Eileen Atkins (Princess Dragomiroff) also appeared in the 2007 Marple film Towards Zero. Hugh Bonneville (Edward Masterman) also appeared in the 2010 Marple film The Mirror Crack’d From Side To Side.
Posted by Douglas Payne at 8:10 PM

Start following our signals today and earn up to 270% daily.