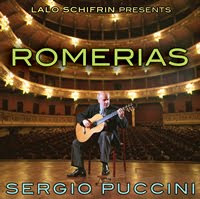 “Romerias” is a suite of nine solo guitar pieces that Lalo Schifrin was commissioned to write in 1986 by famed guitarist Angel Romero. Romero had earlier become associated with Schifrin as the guitarist was selected to perform the composer’s wonderful "Concerto for Guitar & Orchestra," which was premiered in concert in September 1984 with the Los Angeles Philharmonic Orchestra and on a 1985 Angel LP with the London Philharmonic Orchestra (Schifrin re-recorded the “Guitar Concerto,” as it had then become known, again in 1996 with a different guitarist).

While Romero performed Schifrin’s “Romerias” in 1986, a recording of the full suite has, surprisingly, never been made until now. The composer, whose “Danza” here picks up parts of “Gauchos” from Schifrin’s terrific and tremendously underrated 1977 album Gypsies, also had this suite’s "Tango" and "Malambo" (probably the suite’s most notable composition) recorded in 1998 by Argentinean guitarist Juanjo Dominguez for the composer’s release of the 1969 Che! soundtrack on his Aleph label. The CD was mostly made up of (most of) the original 1969 Tetragrammaton LP soundtrack recording, enhanced with several new performances including these two pieces.

Schifrin himself has always thought much of this particular suite, saying “Romerias in Spanish means Carnivals or big parties where there is a display of popular arts, food, and drinks.” He adds that “Romerias for solo guitar is a suite that reflects that feeling of celebration. It explores the different possibilities of this great instrument within the parameters of classical, popular and folk elements. At the same time, it also brings out the various potentialities of the guitar technique.”

Sergio Puccini was born in Rosario, Argentina, in 1958. He began his musical training at eight, at first playing folk, pop and jazz guitar. At 15, he made his classical guitar debut, studying first in Argentina then later at Indiana University in Bloomington, Indiana.

Puccini has appeared as a soloist with many orchestras throughout the world - he’s recently returned from Ecuador, where his standing-room only performance of Astor Piazzolla’s Double Concerto for bandoneon, guitar and orchestra with Argentinean bandoneon player Rodolfo Mederos brought the house down. He has also recorded six previous CDs. 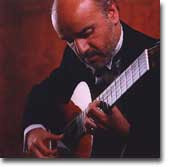 Romerias, issued on Lalo Schifrin’s own Aleph label, is Puccini’s seventh disc and probably the one that will finally bring world renown to this tremendously intoxicating guitarist.

Sergio Puccini’s performance here is remarkable, like he knows exactly what Schifrin is aiming for – guitar artistry that touches on both classical structures and jazz inflections. Puccini takes the piece and his performance utterly seriously. But he never forgets the fun that goes into constructing and witnessing such a performance. One senses that even young kids would love what he accomplishes here. It’s witty and reverent, yet sly and playful too.

But, truth be told, “Romerias” is only one of this 65-minute disc’s innumerable pleasures. Puccini has enlivened this surprisingly brief suite on disc with a number of other fascinating and utterly unique guitar performances, all refreshingly out of the usual canon of solo guitar pieces and each rendered lovingly and with an abundance of absolute noteworthiness.

But Leo Brouwer’s remarkable ten-piece “Nuevos Estudios Sencillos” is something worth savoring (particularly “Omaggio a Sor”), so animated with the influences of its various hommages as to be the disc’s single most exciting performance.

Sergio Puccini has really come up with something special here. Romerias is as much a treat for guitar-music enthusiasts as it is a joy for those who favor a little spark of jazzy inflection in their classics.
Posted by Douglas Payne at 3:09 PM

Watch this now or quit placing bets on sports...