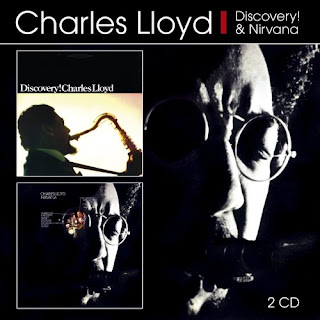 The two-disc set represents some extraordinarily fine music, and certainly some superior music in the development of one of jazz’s greatest living saxists. Born in Memphis, Tennessee in 1938, Lloyd acquired his first sax around 1948 and after several lessons ended up gigging around town with classmates such as Frank Strozier, Booker Little and George Coleman.

Lloyd went to college in California, where he switched from dentistry to composition, eventually hooking up with Gerald Wilson and others before Chico Hamilton recruited the saxist, who took up flute as late as 1958, to be his musical director. Lloyd stayed with Hamilton through 1964, waxing such classics as Drumfusion (Columbia, 1962), Passin’ Thru (Impulse, 1963) and A Different Journey (Reprise, 1963).

Surprisingly, Lloyd left his star position in Hamilton’s band – where he developed a lot of positive notice – in 1964 to replace Yusef Lateef in Cannonball Adderley’s sextet, where he added significantly towards the marvelous Fiddler on the Roof (Capitol, 1965).

It just seemed extremely odd that a saxophonist already on the way to successfully integrating his distinct individuality into the jazz idiom would choose to be second banana in the band of one of jazz’s most distinctive (alto) saxophonists. And, even more conspicuously, Adderley never showcased Lloyd’s characteristic compositions the way Hamilton did.

Still, Lloyd launched his own solo career during his tenure in the Adderley band with Discovery, a mostly quartet affair that resulted from two sessions recorded in New York City at the end of May 1964 (and has only been issued on CD once in Japan only), then left Adderely in 1965 to form his own quartet.

On both of Discovery’s sessions, Lloyd is partnered with the great pianist Don Friedman (b. 1935), a free-thinking traditionalist who also left Los Angeles for New York City at about the same time Lloyd did. One rhythm section features Lloyd and Friedman with bassist Eddie Kahn (who worked with Eric Dolphy) and drummer Roy Haynes (b. 1925). The other group features bassist Richard Davis (b. 1930) and drummer J.C. Moses (1936-77).

While Charles Lloyd was wrongly dismissed by many critics at the time as a Coltrane clone, his already well-developed tone on tenor was steadfast and pure, if perhaps only influenced somewhat by Impulse-era Coltrane. Lloyd is simply magnificent here. Few debut albums in jazz – before or since – have ever had this much personality.

Producer and annotator George Avakian indicates that the “music of Charles Lloyd does not always make for easy listening.” This is not only one of the highest compliments anyone can pay a jazz man, but it also suggests that there is as much creativity as communication in Charles Lloyd’s playing. Only rarely does Lloyd ever go outside (briefly on both “Forest Flower” and “Ol’ Five Spot”). And even then it’s not too far out. He’s more interested in staying within his music – and he clearly wants to keep the listener there too.

What Discovery reveals especially is Lloyd’s remarkable compositional ability. Surely, a number of the tunes here had been heard before: “Forest Flower” was originally heard on Chico Hamilton’s Man From Two Worlds (Impulse, 1964) and the two flute features, “Little Peace” (originally known as “A Rose For Booker” from Hamilton’s Drumfusion and something Lloyd would later resuscitate on his 1994 All My Relations and 2004’s Sangam) and “Love Song To A Baby” (heard on Hamilton’s A Different Journey and Man From Two Worlds and heard again on the 1967 album Charles Lloyd in the Soviet Union) were familiar. “Sweet Georgia Bright” is probably better known from its appearance on Cannonball Adderley Live! (Capitol, 1964) and many appearances on later Lloyd records up to Rabo de Nube (ECM, 2007).

Lloyd balances his other originals (“How Can I Tell You,” “Bizarre” and the piano-less “Ol’ Five Spot”) with a pleasing cover of Henry Mancini’s “Days of Wine and Roses” for a tremendously cogent program that’s a little more than 45 minutes in length – a surprising playing time for the period. Discovery is simply packed with great music that’s not only worth hearing over and over again but, for once, makes the typically hyperbolic title of the time worthy of its name.

Nirvana is an unusual compilation that was rush-released in 1968 after Lloyd’s quartet with pianist Keith Jarrett and drummer Jack DeJohnette transcended typical jazz popularity with emerging rock audiences to become one of the single most popular jazz groups of its day. Aside from producing a plethora of excellent music for the Atlantic label in the late 1960s, this quartet remarkably never condescended to demean their creativity with any sort of crossover appeal like electrics, boogaloo rhythms or mind-numbing 4/4 ostinati.

Strange as it is, Nirvana is pretty darned good and more guitar driven than anything else Lloyd would later become known for doing. Columbia took eight unreleased tunes Lloyd had recorded for the label – many of which were outtakes from the brilliant Of Course, Of Course (Columbia, 1965) album with Lloyd, guitarist Gabor Szabo, bassist Ron Carter and drummer Tony Williams – and combined them with “One For Joan” and “Freedom Traveler,” the first two Lloyd compositions from the Chico Hamilton album Drumfusion (Columbia, 1962).

It wasn’t exactly what the group’s fans wanted to hear and the album was soon forgotten and deleted. Many years later, the spectacularly perfect Of Course, Of Course was reissued on CD (Mosaic, 2006), with three of the most obvious Lloyd-Szabo-Carter-Williams titles from Nirvana included as bonus cuts (“East of the Sun,” “Island Blues” and “Sun Dance”).

The two Drumfusion cuts have not previously been heard on CD and the other four titles from Nirvana (“Carcara,” “Long Time, Baby,” “Love Theme from ‘In Harm’s Way’,” and “You Know (From ‘Ecco’)”) are making their first-ever appearances on CD here. It is interesting to note that the flip side to a 45-release of “You Know,” a groovy, non-LP cover of The Beatles’ “She’s A Woman,” still remains unknown and will probably remain forever unreleased on CD (lord knows who the guitarists, bassist and drummer are here).

To read Malcolm Dome’s absurdly misinformed notes to the CD portion of Nirvana (there were no notes nor much information at all on the original LP) would lead listeners to believe that Nirvana represents “the finest album from the Charles Lloyd Quartet” – an allusion, perhaps to the Jarrett/DeJohnette group that this music doesn’t even remotely resemble. But this is just rubbish.

First of all, it was not even a real album; certainly not one that Lloyd ever intended releasing. Secondly, it’s hard to argue that any of the Lloyd-led music on Nirvana - good as it is - stacks up successfully to anything on the first Lloyd quartet album, Of Course, Of Course, or any of the many classic Lloyd quartet records with Keith Jarrett (in place of any guitarist) laid down on Atlantic Records during the late 1960s.

Still, Discovery!/Nirvana is a joy to have and a very necessary item in Charles Lloyd’s now vast discography.
Posted by Douglas Payne at 10:57 PM

Great write up Doug makes me want to (which I will) get this great piece of music. Thanks Marilyn

Doug, from the moment "Nirvana" was released way back when I have loved this music. Granted, it's a madeup "album," but one that has always spoken to me. I wore out the LP long ago and so I was thrilled to find it *finally* released on CD. Great stuff!

cristina said...
This comment has been removed by the author.
11:38 AM

cristina said...
This comment has been removed by the author.
12:05 PM

i'm trying to ask you if does any sense to buy this cd when i've already Of course,of corse and Nirvana
.Please let me understand,cristina