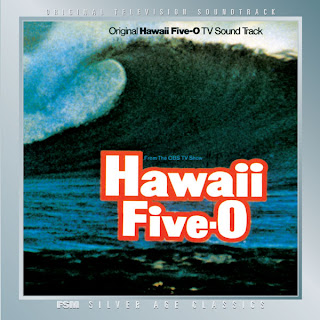 One of the holy grails of TV soundtracks is this 30-minute soundtrack Capitol Records issued in 1970 to the CBS-TV show Hawaii Five-O. The good folks at Film Score Monthly stepped forward to finally bring this fantabulous music to CD, troubling through untold waters of licensing rights that have probably kept this music off the market for four full decades now.

And here in 2010, we have a pristine issue of this music, beautifully re-mastered by FSM and presented with the LP’s original artwork, H50 producer Leonard Freeman’s original liner note and an uncommonly brilliant analysis of it all by the uncommonly gifted Jon Burlingame – whose prose here is worth the price of the disc alone.

Hawaii Five-O (1968-80), one of TV’s longest running police dramas, benefitted by one of the greatest, most memorable TV themes ever devised. Ever. Few TV themes have ever had the instantly identifiable stamp composer Morton Stevens (1929-91) gave to this theme – and the whole of the show.

In a passage from Jon Burlingame’s brilliant book TV’s Biggest Hits: The Story of Television Themes from “Dragnet” to “Friends” (Schirmer Books, 1996), the author relates:

“Freeman, in his liner notes for Steven’s own Capitol LP of first-season ‘Five-O’ music, said he insisted on ‘no ukuleles or steel guitar or falsetto singers or overused bongos,’ a demand that Stevens later confirmed. ‘He didn’t want the typical Hawaiian sound,’ the composer said, ‘so I found a new Hawaiian sound that Hawaii didn’t know it had.’

“The final triumph was the fusion of the music with editor Reza S. Badiyi’s main-title visuals, a montage that is still one of television’s most impressive. The teaser smash-cut to a giant wave rolling in to the sound of Steven’s drumbeat. Scenes of the surf, the Honolulu setting, and the Hawaiian people were cut in precise time to the beat; a spectacular sunset and the gyrating hips of a hula dancer were superbly matched to the rhythm of the theme.”

It’s a remarkable piece of music no matter how you consider it.

While Stevens was recording the music for the two-hour pilot in February 1968, one of CBS’s engineers told his friend, Mel Taylor, drummer for The Ventures, of this exciting new music with a rock and roll vibe. Taylor got The Ventures to record a version of the theme, which was issued on the Liberty label in September of that year to coincide with the show’s debut. Naturally, the show and the song turned into hits – huge hits.

Morton Stevens invited three of the Ventures to help him score an episode of the show, “Up Tight,” and then a little later on, Stevens asked Taylor to produce a Hawaii Five-O soundtrack for Capitol. Taylor complied, pulling together the original recordings Stevens had done for the show in 1968 plus the five cuts the Ventures members laid down with Stevens for “Up Tight” and came up with this program of 12 tunes, issued in January 1970.

Unlike so many great TV soundtracks of the time for shows like Mission: Impossible, Mannix or even Peter Gunn, all of which were re-recordings of the original shows’ themes, Hawaii Five-O really is the original music from the TV show. All of the performances heard here, including the main theme, were edited to fit the TV show.

Hawaii Five-O contains much great music that weds jazz with rock in one of the most successful fusions ever heard in or out of TV. There isn’t one dud moment in the whole of this presentation, so it’s not worth listing highlights. Everything here is just perfect.

The only shame of it is that there isn’t more music to be heard here. This probably has something to do with the expense (or rights?) to undertake such a mammoth project.

But I’m thankful enough for what’s here. Hawaii Five-O is one of the great albums of film or TV music of all time.
Posted by Douglas Payne at 7:11 PM

Worth noting, of course, is cut 2,
"Call to Danger," which was a) the theme song to an unsold pilot starring Peter Graves a year before he joined "Mission: Impossible," and b) is forever recognizable as the music used under "A CBS SPECIAL Presentation." (Brilliantly edited down, I might add.)