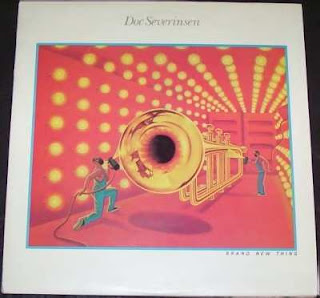 Back in fusion's glory days, so many records were coming out that more than a few were bound to get lost in the shuffle, even if they were made on major labels by name guys like Doc Severinsen.

But no one expected the loudly-dressed bandleader of The Tonight Show to put out a fusion album like Brand New Thing (Epic) in 1977 either and, as a result, the album was one of those that got lost in the sands of time and never found the audience it so richly deserved.

Severinsen (b. 1927) was a session player in New York City back in the early 1960s and was caught on many fine jazz records, particularly many of the orchestral jazz discs of the day. The trumpeter also issued many easy-listening albums on the Command, Project 3 and RCA labels while he helmed the highly-visible post as Johnny Carson's bandleader on TV for many years.

Severinsen signed with the Epic label in 1975 and issued Night Journey, a foray into the pop and disco world that yielded something of a dance-floor hit in "I Wanna Be With You," a "Pick Up The Pieces"-styled groove that worked well enough to convince people to hear Doc Severinsen in a whole new way.

Then came Brand New Thing, which really was a whole new thing for Severinsen. Oddly, Epic seems to have done almost no promotion whatsoever for this record. The Columbia family of labels, of which Epic is a part, had a fairly clever "Individuals" campaign to promote their heady list of first-rate jazz and fusion releases and, for whatever reason, Brand New Thing was not part of it all.

Odd, since this production was helmed by the great Tom Scott, who was riding high on his excellent "Gotcha" theme from Starsky & Hutch and his fusion classics with the L.A. Express, not to mention definitive work on pop hits such as "Jazzman," "Listen To What The Man Said" and high-profile work with Joni Mitchell and George Harrison as well as countless others and was, of course, part of the "Individuals" campaign. So many fusion greats are also featured here that it's absolutely mystifying why the label didn't get behind the album and support it (probably because Severinsen's TV gig prevented him from touring to support the record himself).

Brand New Thing is one of Scott's few productions for someone other than himself - another, flautist Tys van Leer's terrific Nice To Have Met You (Columbia, 1978), will be discussed later - and is in that classic groove that Scott laid down on his own solo albums New York Connection (Ode, 1976) and Blow It Out (Epic/Ode, 1977).

Assembled here is a first-rate group of fusion's best musicians that seemed so ubiquitous at the time. Sessions were obviously done in both New York City and L.A. with Tom Scott on tenor sax, clarinet and lyricon, Richard Tee on keyboards, Eric Gale and Lee Ritenour on guitars (while these two fantastic guitarists were featured shortly thereafter together on the very worthy Sugar Loaf Express, Ritenour seems almost superfluous as Gale gets all of the solo nods here), Anthony Jackson on bass, Rick Marotta on drums, Ralph MacDonald on percussion and, on three tracks, four cellists (Edgar Lustgarten, Kathleen Lustgarten, Ray Kelley, Jan Kelley) sparingly deployed.

Tom Scott contributes his distinctive compositional flair to nearly the entire program with such strong tunes as "Midnight Flite," "Fernando's Fantasy" and "Soft Touch." He also co-writes "Do It To It" (which seems tailor-made to be a single, although I can't find evidence that Epic issued any singles from this LP) with Severinsen and "Chicken Chatter" with Rick Marotta and G. (probably Jerry) Marrotta.

Backed with Scott, Tee and Gale's characteristic chemistry, Severinsen certainly seems to have wandered into one of the better Tom Scott albums ever made. But it is keyboardist Richard Tee's distinguishing touch on the keyboards that gives the record its most audible signature and provides the strong foundation which makes it ultimately as alluring and enjoyable as it is - even though he takes no solo features on the album. The pianist also contributes his own "Virginia Sunday" to the program, something he'd later perform himself with Gale, Scott and MacDonald on his 1979 solo debut, Strokin' (Tappan Zee, 1979).

Severinsen's playing is quite a surprise here. He doesn't seem to be overwhelming the proceedings - as he could on occasions prior to this - as much as contributing most remarkably to them. The trumpeter gets downright lyrical, notably on "Midnite Flite," "Soft Touch" (both on flugelhorn), a pastoral, somewhat majestic, take on "Shenandoah" and "There Is A Girl," one of the stronger of Ralph MacDonald and William Salter's many compositions (which was later covered by drummer Idris Muhammad on his 1993 CD My Turn).

Severinsen grooves just fine on the up-tempo pieces as well, without ever dominating them, letting his accompanists provide the fills to make it varied and interesting, like many a good jazz album did prior to the fusion era.

Brand New Thing is not only a very good fusion album, it is a very good jazz album and certainly one of Doc Severinsen's very best. Indeed, the trumpeter was later to say that he also thinks this is his best album.

There's probably very little chance this fine record will ever see the light of day on CD, so it's well worth tracking down on vinyl, particularly if you consider yourself a fan of Doc Severinsen, Tom Scott, Richard Tee or Eric Gale.

Thanks to Pekis and the original poster, you can download the album here.
Posted by Douglas Payne at 2:07 PM

Love your blog. Glad i found you.

Pekis said...
This comment has been removed by the author.
1:22 AM

Thanks for the link, Pekis.

Yes ! this and 6 other EPIC Doc cds are now available on cd yes!

Deluxe, thanks Pekis & Doug. Anyone on about Doc's "Fever" lp?

Great album---found it in a thrift store in Nevada for $1---one of the best dollars I ever spent!

I agree completely with your thoughts - this is a sensational jazz album that should not be overlooked. Doc will indeed surprise the listener with this wonderful creation.