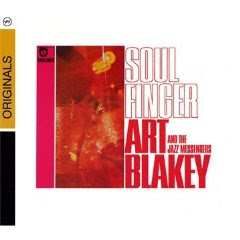 Mixing the invention and spontaneity of jazz itself with the humor and the fun the art inspires at its best, Art Blakey's 1965 Limelight album Soul Finger is a most pleasant surprise.

Reissued on CD in 2009 as part of Verve's Original series, it should have been as predictable as the many great Blakey recordings for Blue Note (1947-64), Riverside (the early 1960s) and other labels (Columbia, Bluebird, Bethlehem, Impulse) before this.

But times were changing. By this point in history, the Jazz Messengers was hardly the tight group of young creatives it once was. In fact, this marks the beginning of certain shifts in jazz when Blakey (1919-90), like so many of his generation, struggled to find ways to reach listeners. And his former bandmates were becoming famous and marketable on their own - away from Blakey's stewardship.

Blakey's 1964 switch to the Limelight label signaled this concern. Limelight was a boutique label that trumped out straight jazz for a new generation of tastes. Fancy covers, some that qualified as op-art themselves, with all-star jazz line-ups performing shorter, radio-friendly songs, with much more of an ear toward catchy, pop-flavored jazz - years before there ever was a CTI Records. Gerry Mulligan's own Limelight album summarized it best: If You Can't Beat 'Em, Join 'Em.

This 1965 album is the second of four albums Blakey recorded for the label and surely the very best. Blakey's sextet here includes the two-trumpet line-up of Lee Morgan (a Jazz Messenger from 1957-61 and again in 1964-65) and Freddie Hubbard (who replaced Morgan in Blakey's group from 1961-64 and recorded with the trumpeter the month before on Hubbard's The Night of the Cookers), West Coaster Lucky Thompson (sax), recently back from an extended stay in Europe in one of his only appearances with Blakey, John Hicks (piano), in one of his earliest recordings and his second with Blakey, and Victor Sproles (bass) from Chicago in his second and final Blakey recording.

The program alternates a number of better-than-average group originals with the pretty cover of "A Quiet Thing," from the little-known musical Flora the Red Menace, Liza Minnelli's 1965 Broadway debut. The title track is not the Bar-Kays classic - which was still two years away from being born - but, rather, Hubbard and Morgan's take on (or hint of ) John Barry's "Goldfinger." Once the group gets past the brief Bondian introduction, things settle into a Buhanian blues groove.

"Buh's Bossa," credited here to Lee Morgan (and elsewhere to both Morgan and Hubbard) is a classic Morgan minor waltz in a bossa mode, with Blakey providing his trademark "big beat" sound, trotting the bossa to the hard bop from which it derived. Thompson's "Spot Session" (a reference, I guess, to when musicians score music to films) finds the saxist turning to soprano, sounding remarkably like Grover Washington, Jr. would many years after, and features a nicely characteristic spot for the 24-year-old Hicks as well as a nice respite courtesy of bassist Victor Sproles.

"The Hub" is another one of Freddie Hubbard's great hard-bop jam themes (and one that, oddly enough, I don't think he ever performed again) featuring fine spots for Hubbard, Thompson, Morgan, Hicks and Blakey's commanding and distinctive rhythmic drive. Blakey's own "Freedom Monday" (also known as "Freedom One Day") is a jazz march in Bu's patented Messengers style, and his one showcase for prowess all over the skins.

Many things have probably worked against keeping Soul Finger in the "limelight," not the least of which is that it has been out of print almost since the time it was first issued. But now that this marvelous musical experience is finally available on CD for a whole new generation (or two) of listeners to enjoy, it's worth picking up on to experience one of the last great chapters in the history of Art Blakey and the Jazz Messengers - that is, perhaps, until Wynton Marsalis, who was three years old at the time of this recording, joined and revitalized the band in 1980.
Posted by Douglas Payne at 12:28 AM

Please upload the music from this once had/once lost date in my collection. THANKS!

Indeed, that is true, psublminal. Thank you for pointing out that Soul Finger marks the recording debut of alto sax great, Gary Bartz. It's a great group all around.

Jazzdisco project actually shows Bartz as the only saxophone player on all but the one Thompson soprano piece, Spot Session. The actual album cover claims Lucky plays both soprano and tenor and does not mention Gary Bartz at all. I'm not at all sure that either of them is correct as I think there are two pieces that sound like Lucky on tenor.
very confusing era for Bhu