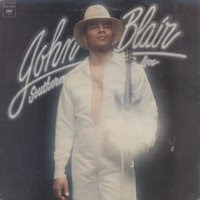 Talented and handsome violinist John Blair (1943-2006) had a sadly limited career. He was a creative and interesting violinist who had a hand in inventing and/or attempting to popularize an electric violin known as the Vitar, a cross between a violin, a viola and a guitar, that probably didn't become all that famous because it sounded like, well, an electric guitar.

Somehow, Don Sugarcane Harris and Jean-Luc Ponty made much greater names for themselves on the violin in the jazz world at the time - one as a cult fave and one as a pop phenomenon - than the unfortunate Mr. Blair. There were also fusion albums by violinists Michael Urbaniak, Didier Lockwood and others at the time. Perhaps John Blair just never had the opportunities the others had. Who knows.

Blair is also featured, however briefly, on Lalo Schifrin's theme to the short-lived TV series "Most Wanted," which appeared on the composer's album Towering Toccata (CTI, 1977). "I've used an electric violinist [here] who is fantastic," Schifrin enthused in a November 27, 1976, Melody Maker article. "His name is John Blair. He uses a five-string violin which goes to a low C like a viola. He plays very soulful, like Jean-Luc Ponty only more funky."

This 1976 album is the second of only four solo albums ever issued under John Blair's name. Mystical Soul (A&R, 1971) was the first, We Belong Together (CTI, 1977) was the third and The Master Creed, the electric violinist's only CD issued by the artist himself in 2004, was the fourth and final album, when Blair began to call himself John Ellington Blair to tap into his distant relationship to Duke Ellington.

Southern Love is an engaging musical experience that deserved better than it got. Musicians in John Blair's "Back-Up Band" are unknown, unless I'm missing an insert sleeve giving credits. The back cover gives no musician credits whatsoever; however, there is a picture of one "John Lewis" on the back cover.

This John Lewis, who is not the MJQ pianist John Lewis, is a drummer who is, I think, the guy who ended up as the drummer in Prince's instrumental group Madhouse. Lewis issued an album that same year titled Traveling with the John Lewis Sound (Finite, 1976), featuring Blair along with Karen Joseph on flute, Alex Foster on tenor sax, Bob Sardo on keyboards and Paul Metzke on bass. So it's a safe bet that these folks also constitute Blair's "Back-Up Band" for the Southern Love album.

The sweet electric program consists mostly of Blair originals, that, truth be told, really aren't that original. But the pieces are consistently engaging and often sound similar to much of the captivating music Tom Scott was writing and performing at the time.

Blair's instrumentals often suggest other tunes, which could be a good or a bad thing, depending on how you look at it. For example, "Southern Love" suggests a mix of "Motherless Child" and "Summertime." "Sunburst" opens with a suggestion of "Concierto de Aranjuez" (which Chick Corea had recently parlayed into his own "Spain"). "Searchin' Uptown" is reminiscent of Gene Ammons' "Jug Eyes." And "Tower of Fantasy" uses an "Inner City Blues" bass-line to build its good groove (Blair went on to play with Marvin Gaye and even issued a CD of a 1978 concert the two performed together). Truth be told, though, all of these foundations are enough to launch any talented instrumentalist like Blair off onto their own good thing.

Unfortunately, most of the songs are far too short to allow Blair to get into a good jazz groove, wending as they do into a radio-friendly three-minute range. Whatever the reason for this was, there is a lack of improvisation here that many jazz fans - and anyone who wants to hear Blair explore the Vitar - will miss.

Still, what is here is worth hearing. Blair is a tremendously exciting soloist on the Vitar, offering something not unlike what a rock guitarist would deliver; always engagingly melodic and something you could almost hum along to after one or two listens.

It's a shame that the songs' short playing time don't give Blair the opportunity to strut his stuff. His brief solos suggest that maybe improvisation is not his thing. That's a shame for the listener. In spots, he can sound like Tom Scott on tenor (on the rousing "Hot Pants") or even like Scott on his own electrified sax, the lyricon ("Southern Love"). But, one will be left with the wish to hear more of Blair's Vitar here.

Blair leads with vocals on "I Sent My Son," "This is the Last Time" and "Sugar Plums" (where he whistles too) and while he's a pretty good vocalist in a Jon Lucien sort of way, it deprives the already attenuated program of his vital but too-brief Vitar playing (only "Last Time" features the Vitar…on the fadeout).

Blair, like flautist Jeremy Steig, whose 1975 Columbia album was also overseen by the great impresario John Hammond, left - or was relieved of - the Columbia label in 1976 to pursue a sole album on CTI Records. Blair's We Belong Together,though, is not the album Southern Love was, leaving more than quite a bit to be desired. 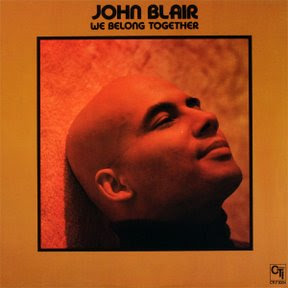 It's hard to detect Blair's presence on the CTI album. His vocals dominate and there are precious few opportunities for him to expound on the Vitar.

The CTI album is a strange mix of old rock tunes like "Roll Over Beethoven" and "Lucy in the Sky With Diamonds," peppered with an odd preponderance of tunes from England Dan and John Ford Coley ("We Belong Together" and "Don't Feel That Way No More" come from the duo's 1977 album Dowdy Ferry Road) and that duo's hits-writing guy, Parker McGee (who wrote "I'd Really Love to See You Tonight" and "Nights Are Forever Without You" - here with two tracks from the author's eponymous 1976 album, "Got That Feeling" and "Feather Lite & Honey Smooth").

Only Blair's own disco-y original "I'm A Wizard" even registers on the David Matthews-arranged CTI album. A hit that never was. But then, sadly, John Blair mysteriously disappeared from the musical radar and all of these albums, which will probably never find their way onto CD, fell off the face of the earth, pretty much forever.

While Southern Love never feels like enough, it is worth tracking down, though, to experience what is here. It's not often the satisfying artistic experience it could be. But it is a very worthy example of how good not only violinist John Blair was but how good fusion could be.
Posted by Douglas Payne at 11:12 PM

Hi Doug, happened up on your blog while I was looking up John Blair. I dunno how I could have missed you before, this is some kind of cool.

If you want to hear a lot more John Blair, look up "The Isaac Hayes Movement" and listen to "Something." He has two extended solos that will knock you out.

He does remind me a lot of Sugarcane -- but less bluesy, more like . . well, Jimi, really, which is reasonable for 1970.

Was Blair perhaps one of those ubiquitous Stax guys who played on a gazillion things and never really got credited?

Thanks, I'll let you know if I find out any more.

Like Jenny, I stumbled upon your magnificent blog while searching John Blair. Your insights are 100% accurate. His version of Richie Havens "Sugarplums" is definitive.
A bit of trivia. John Blair was an accomplished karate practitioner. In 1973 he was a judge in a competition I had (and lost).

A friend turned me on to John Blair while on summer vacation from college in New York. She said Southern Love was a album that I needed to purchase which I did right away.Great album which I still own on vinyl back in New York. My father worked at the Bottom Line club in New York and can remember seeing John perform there.After his show I got achance to meet with him and found out he was a black belt in karate and we worked out acouple of times together. Where is John Blair now ?

Great enjoyable and informative piece--thanks for posting it. I saw John Blair on TV (amazingly) backed by a group that included Herbie Hancock on "The Tonight Show" which was hosted that night by Bill Cosby. Sometime in the late '70s or early '80s, I think, though I have found no reference to it on-line anywhere. An unforgettable performance (I think it may have been 'Sometimes A Man') that included playing, singing, and martial arts moves, him wearing a gi. I remember having his first album--probably smoked it...

I was fortunate enough to manage 'The Vitar Master' John Ellington Blair during his twilight years to his 'Death'. Amen.

I'm a singer that did a lot of shows with him..Windows over Harlem..etc..sad that he has passed..I learned a lot from him..he was almost penniless then..but difficult to work with!! Most venues we did..the owners would BAN him from entering after dealing with him..he once told me to show up at the gig looking like a high class hooker!

I had a radio show in St. Thomas, Virgin Islands back in 1971..it was my first broadcasting job. I had the 7am till Noon shift on Sunday. The station was located in a suite in the Virgin Island Hilton with the control room overlooking the harbor. I used to put on John's "Mystical soul" lp and just track an entire side and watch the Caribbean day unfold...EVERY Sunday without fail..He was truly amazing! Thanks for your blog and insights..CHEERS..and I'm still in the VI and listening to John all the time.

My Dad, Dr, Henry Kolar, was John's violin teacher in San Diego, CA for 10 years from about age 8-18 yrs. He started John on the violin in elementary school. Impressed with his talent, Dad gave him additional training beyond what the public schools offered and was very sad to learn of his passing today, 9 years later.

John Blair is one of the most underrated violinist of all time.He never received the credit he truly deserved.

About forty years ago I went to the Bottom Line in NY C to see Stankey Turrentine. When the show started they introduced "John Blair "
I remember thinking who the hell is this and why is he wasting my time. He played several songs from Southern Love. I was mesmerized. To this day it is one of my favorite albums. Which I still have. I have often wondered what became of him.