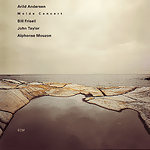 This August 1981 concert recording featuring Norwegian bassist Arild Andersen's fascinating and perfectly assembled quartet with John Taylor on piano, Bill Frisell on guitar and Alphonse Mouzon on drums was first issued by ECM on LP in 1982 with seven tracks and again on CD in 2000 with 11 tracks - to almost no avail in both cases.

The 1982 LP was issued by ECM as A Molde Concert with typography only and no art whatsoever and the 2000 CD, titled Molde Concert, was issued with one of ECM's typical Nordic-style photos - and Frisell's name not so mysteriously acceding over Taylor's name in the cover credits.

It is a superlative performance, catching all four musicians - at varying stages in their careers - delivering a wonderfully unified performance that should have probably proven to be more exemplary than it did. Perhaps it's the fact that this concert took place in Norway. Hardly the center of renowned jazz; at least, perhaps, until this recording.

Andersen (b. 1945), who had already racked up experience with Jan Garbarek, Karin Krog, Don Cherry, George Russell, Roswell Rudd and Charlie Mariano among others, somehow formed what could now be considered this all-star quartet.

Mouzon (b. 1948), of course, had already traversed through Weather Report and the bands of McCoy Tyner, Larry Coryell and Gil Evans, as well as his own recordings for Blue Note and MPS (and the Jeremy Steig album mentioned below).

Frisell (b. 1951) was probably the newbie of the bunch, having made only a few appearances on record by this time, from Hal Wilner and Eberhard Weber to Mike Metheny, but sounding like a pro - much more rock-ish than usual - every step of the way. 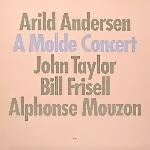 "Cherry Tree" is fusion in an acoustic mold, with Taylor assuming a Corea-like mantle. This is the way jazz is supposed to be. The quartet carries its repartee through on the creative and inspired "The Sword Under His Wings" (featuring an excellent duet between Andersen, on bowed bass, with Mouzon in all his glory - and, later, one of Frisell's interesting solos) and wraps up on the engaging and enterprisingly jazzy "Dual Mr. Tillman Anthony," a (probably) Miles Davis song from 1967 which first appeared on the trumpeter's 1976 record Water Babies.

"Targeta" and "Koral" (carried largely by Frisell) are reminiscent of Keith Jarrett's European quartet recordings, particularly those on ECM (surprise, surprise) that lean toward the gospel side of things.

Frisell, who at this early point in his career had developed something of his own sound, channels a bit of Pat Metheny's vibe, thus furthering the ECM connection - but what a glorious sound indeed: mixing the soul of jazz with the ache of rock.

Frisell is outstanding on "Six for Alphonse" - which also features strong parts for Taylor, Andersen and the titular Mouzon as well. The guitarist engages beautifully with Andersen on the guitar-bass duo of "Lifelines," which is a precursor to the music this duo made on Frisell's debut In Line (ECM, 1982). Frisell stands out on "Cameron" and "A Song I Used To Play" as well.

Taylor shines throughout, of course, and is most notable on the near-funk take of "Commander Schmuck's Earflap Hat."

Andersen contributes all but one of the program's compositions and is beautifully spotlighted on "Nutune" (with Frisell providing beautifully customary washes of supportive sound) as well as his own "Cameron" and "A Song I Used to Play."

Aside from all the interesting things going on during this set, it is interesting to note that Arild Andersen later featured both trumpeter Nils Petter Molvaer and keyboardist Bugge Wesseltoft in his band long before anybody ever heard of them.

Molde Concert remains something worth hearing and savoring.
Posted by Douglas Payne at 12:48 AM

Ridiculous that I've been listening to Bill Frisell for twenty-five years and had no idea that this record existed. This is great.