Question: Compost "Life Is Round" 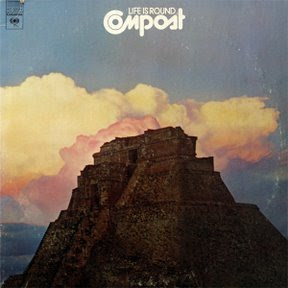 Having no idea this music even existed, I was startled to find this album recently featured in the magazine waxpoetics (No. 29) as part of their always revealing re:Discovery section.

Writer Maxwell Schnurer picked up the Compost album Life is Round (Columbia, 1973) at a thrift shop for twenty-seven cents. As I have since discovered, the rest of us can't find this album anywhere without taking out a second mortgage on the house. Not many copies were printed - and not too many copies remain in the public domain.

(At last check, eBay had no listings for this - but that could change at any time - amazon.com currently lists two 8-track tapes and GEMM lists a few copies starting at $75.00.)

Quite the discovery indeed, Compost features such multi-talented, multi-instrumentalists (composers, etc.) as Harold Vick, Jack DeJohnette, Bob Moses, Jack Gregg and Jumma Santos. On this, their second album, they are also joined by Roland Prince, Ed Finney and, on vocals, Lou Courtney (on Jack Gregg's "Moonsong") and Jeanne Lee (on Bob Moses' "Life Is Round").

Their eponymous first album (Columbia, 1972), was an odd attempt to make some sort of rock statement, laced as it is with vocalists awkwardly singing rather other-worldly lyrics. It's like Santana on a very, very off day.

Life is Round, however, perfects their strange and glorious alchemy. It is a near brilliant piece of jazz-rock (and funk) that has artistic and accessible written all over it.

I downloaded my pristine copy from Smooth's fantastic blog My Jazz World…and I can't thank him enough or properly show my gratitude for this music as well as much of the other incredible posts he provides on his site. I would have never heard this music otherwise. Never!

Wanting to read more about the album, I was stifled by the lack of information on the Internet about this group or this tremendous piece of musicianship…that is, until I discovered this recent posting on the Old And New blog. This insightful and well-written posting even suggests there may have been other Compost recordings that were never released!

So, dear reader, here is my question. I swear I've heard both Jack DeJohnette's "Compost Festival" and Harold Vick's "Buzzard Feathers" somewhere else before.

But where? Cover versions? Re-titled as something else? Compilations (which seems unlikely)? I just don't know. I've searched both out to absolutely no avail - and it's driving me crazy. Does anybody know where else these songs might have appeared?
Posted by Douglas Payne at 10:51 PM

Great news! Both "Life is Round" and the self-titled debut album by Compost have been reissued on CD by Wounded Bird.

There is a chance you're eligible to get a $1,000 Amazon Gift Card.

Jack DeJohnette's "Compost Festival" is featured, according to a forum post over at organissimo.org, as the last track in a 2000 release of a Stan Getz 1975 live recording under the title My Foolish Heart (featuring DeJohnette along with Dave Holland and Richie Beirach). It's erroneously listed as (Chick Corea's?) Fiesta.
There was another tune the record label could not identify at all which turned out to be Vortex by Dave Holland, who confirmed it in a personnal email statement as the same tune of his featured also in a live tape of Getz at Paul's Mall. Now this recording is another one to be chasing after:)
Thanks for the reference to waxpoetic, I'll try to find the review and check it out