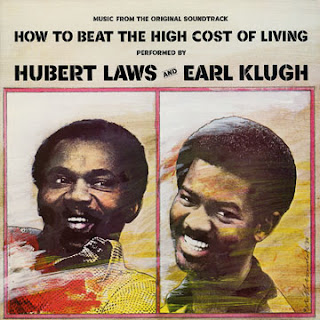 Patrick Williams' score to the 1980 film How to Beat the High Cost of Living is a witty, engaging piece of jazzy fusion that surely ranks its composer as the Mancini of the fusion generation. The Williams soundtrack to Blonde (Playboy Jazz, 2001), proves that he even transcends the now less-than-critcally-acceptable fusion genre.

How to Beat the High Cost of Living is a pure delight through and through and the perfect accompaniment to this breezy, light-hearted film about three suburban housewives (Susan Saint James, Jane Curtin and Jessica Lange) who plot to rob a mall to get the cash they need to survive their suburban lifestyles.

Patrick - or "Pat" as he was known early in his career - Williams (b. 1939) has scored hundreds of films, TV movies and TV shows but was probably best known at the time for his rousing theme to the hit TV show, The Streets of San Francisco (1972-76).

In addition to the film soundtracks that bared his name at the time (Casey's Shadow, The One And Only), Williams had also been riding high on the success of work he did on Billy Joel's The Stranger (Columbia, 1978). Indeed, Williams has since gone onto to provide provocative settings for many other singers including Frank Sinatra (the Duets albums), Barbra Streisand, Paul Anka, Amy Grant, Vince Gill and Brian Setzer.

Williams, who is no relation to Hollywood's other Williams, had released four albums of pop-flavored orchestral jazz on Verve in the late 1960s and occasionally recorded such jazz-oriented albums as Carry On (A&R, 1971), Threshold (Capitol, 1973) and Come On And Shine (MPS, 1977 - aka Theme on Pausa), which features Williams' great disco title cut and his theme to the then well-known TV show Lou Grant (Williams also scored numerous episodes of Lou Grant's spin-off parent, The Mary Tyler Moore Show).

Many of Williams' records often front-lined prominent jazz soloists, such as Gerry Mulligan, Dave Grusin, Tom Scott, Eddie Daniels or trombonist Bill Watrous. Even his soundtracks give prominence to notable musicians (Dr. John, etc.), which is one reason why so many of his scores have found their way onto LP or CD. Williams also has a way with a tune, something that can perfectly underscore a scene on screen as well as stand on its own, spinning on a turntable in someone's living room.

Williams had it perfected by the time How to Beat the High Cost Of Living came around. The soundtrack was issued on Columbia Records, home at the time to flautist Hubert Laws, who is the perfect choice to perform Williams' sprite and effervescent little numbers, along with guitarist Earl Klugh, who would go on to helm Williams' other soundtracks to Marvin & Tige (Capitol, 1983) and Just Between Friends (Warner Bros., 1986).

Laws, a busy session player who had recently been featured in jazz settings on such soundtracks as California Suite (CBS Masterworks, 1978), A Hero Ain't Nothin' But A Sandwich (Columbia, 1978) and Flic ou Voyou (Universal, 1979), turns out to be an ideal and inspired match for Klugh.

The pair had previously been together behind guitarist George Benson on White Rabbit (CTI, 1971) and, more prominently, on three songs from the Bob James album Touchdown (Tappan Zee, 1978), which is probably what sparked Williams to pair the two together for his score (Klugh also appears on the Laws album Family (Columbia, 1980), recorded around the same as the Williams soundtrack).

Laws and Klugh are perfect together and backed here by a small group of L.A. session musicians including the ubiquitous Mike Lang on keyboards (the former Kenton/Zappa sideman became a fixture in Hollywood, and is heard on hundreds of film and TV soundtracks), Tim May and Mitch Holder on guitar, Neil Stubenhaus (who plays the distinctive slap bass which gives the main theme its drive) on bass, Steve Schaeffer on drums and Paulinho Da Costa on percussion.

Strings are briefly present on occasion as well ("Piccolo Boogie," "Dream Something," "It's So Easy Loving You," "The Caper" and "Song For A Pretty Girl").

Great music abounds here, from "Down River," the film's main theme, and the slow funk of "Night Moves" (good solos from Laws and Klugh) to the swinging and jazzy "The Edge" and the soundtrack-sounding "The Caper," which briefly cops a lick from "Rise," Herb Alpert's hit of the previous year that also featured Lang's keyboards.

Williams expertly crafts themes that not only work well in the film, but play to the strengths and the advantages of his soloists, notably on "Piccolo Boogie" for Laws and "Dream Something" and "It's So Easy Loving You" for Klugh. Laws, who is at his best here, garners more of the playing time than Klugh gets permitted. But the guitarist makes his parts count for something special each and every time he gets the chance.

I saw the film in 1980, immediately picked up the soundtrack album and its never been out of my collection since. Unfortunately, though, How to Beat the High Cost Of Living has never been issued on CD and - like too much of Williams' other works - has fallen through the cracks of time and been nearly forgotten about.

As Patrick Williams, Hubert Laws and Earl Klugh are still around making music and some of the music of the fusion era is making a comeback, perhaps some enterprising label like the great Wounded Bird Records will consider giving this long neglected gem a second life.
Posted by Douglas Payne at 10:56 PM

Follow our signals right now and profit up to 270% a day.