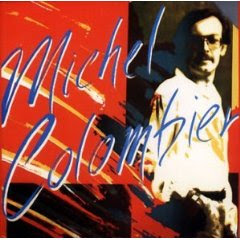 French composer, arranger and pianist Michel Colombier (1939-2004) not only contributed a great deal to the musical wealth of the latter half of the 20th century in a variety of genres, but also worked with an abundance of the world's great artists of the period in such diverse fields as music, film, dance and art.

Colombier's association with the great Belgian artist Jean-Michel Folon (1934-2005) - whose cover art can also be seen on a great many of the LPs and CDs by guitarist Steve Khan - yielded three positively wondrous watercolors on album covers for Colombier himself; surprisingly, though, not this one, which was contributed by New York artist Cynthia Marsh.

Colombier's music can also be heard at the Folon Foundation in Belgium, serenading patrons to the otherworldly wonder of Folon's illustrations, sketches, paintings and watercolors. Colombier's art-world connections even landed famed designer/illustrator Milton Glaser (b. 1929) for this album's follow-up, Old Fool Back On Earth (Columbia, 1983).

Michel Colombier, oddly issued by the otherwise non-jazz label Chrysalis in 1979, was one of only about four or five Colombier albums issued under his own name, the second of three Colombier albums issued in the U.S. and the only one of the leader's albums that can properly be credited as a fusion album (the 1983 album is more of a concept album, with fusion undertones).

The production here was helmed by hit-maker Denny Diante, who'd produced huge hits for Paul Anka ("One Man Woman, One Woman Man," among others), Tina Turner ("Acid Queen"), Major Harris ("Love Won't Let Me Wait"), Maxine Nightingale ("Right Back Where We Started From," "Lead Me On"), Johnny Mathis and Denice Williams ("Too Much, Too Little, Too Late"), Sheena Easton, Neil Diamond, B.B. King and others.

But prior to Michel Colombier, Diante had almost no experience whatsoever in jazz - indeed, hardly any after this either. This may explain the lack of focus in evidence here and the fact that none of this music ever hit. Certainly, none of it made a dent at the radio, on album sales charts or even, sad to say, among the fan bases of the many iconic musicians featured here.

Apparently Diante had asked Michel Colombier and Larry Carlton to come up with a jazz fusion version of Vivaldi's Four Seasons, similar to the huge hit Deodato scored in 1973 with "Also Sprach Zarathustra (2001)" - not even considering the fact that it had been done before by Raymond Fol, another Frenchman and, like Colombier, a pianist, who had scored the tremendous 1965 Philips album, Le Quatre Saisons with a coterie of top-shelf French and American jazz musicians. Colombier refused and apparently this album was the result of whatever compromise emerged.

It's not a bad album. In fact, there's some good playing and some good writing to be heard here. It's just that nothing's terribly captivating. Nothing's very memorable. It all feels, well, like no one's heart was really in it - including Michel Colombier. This probably explains the eponymous title on the oddly un-jazz label (it is worth mentioning, though, that French pianist Jacques Loussier issued two tremendous "Bach Jazz" sets on Chrysalis about five years after the Colombier album). It just seems like no one really cared.

The album pairs a small group of first-rate jazz stars of the time with the London Symphony Orchestra for a classy fusion set that promises much but delivers surprisingly little. The orchestra is rather unobtrusive for the most part and the set never feels like one of those orchestrated fusion discs of the period. But there is never a cohesion - hardly surprising due to the album having recording locations in Los Angeles, Miami and London - nor much inspiration present.

In addition to the keyboard fills and features the leader provides, Michael Boddicker, Jerry Knight, Airto Moreira and Ray Parker, Jr. all provide name-brand-recognition support outside of the spotlight.

"Sunday" starts the album off well enough with a good piece of driving fusion, showcasing Herbie Hancock on a rather indistinct Moog solo (which he does again on "Take Me Down"). Hard to believe that you'd pay to put Herbie Hancock on your album and have him solo on one of the most anonymous instruments imaginable. But bassist Jaco Pastorius provides his classic touch to this piece, so much so, that he nearly dominates it from the rhythm section.

"Sunday," "Queens Road,"(featuring Lee Ritenour) "Overture" (featuring Larry Carlton) and "The Dancing Bull" (featuring Tom Scott) offer some of Colombier's best examples of jazz fusion - all first-rate efforts by any standard - with good intentions, good construction and good playing. Unfortunately, it all just comes up one or two straws shy of a full bunch.

"Dreamland" is a beautiful piece driven by Jaco Pastorius' lovely, melodic and almost crying bass lines. Carlton solos here in that weeping way that suggests the tune's sadness or, perhaps, its incompleteness. Colombier's composition isn't as memorable as the performances the players offer it, which is a shame.

The same could be said of Michael Brecker's feature on "Bird Song," another lovely performance that seems to be one card short of a full deck. The song itself derives as much from Stevie Wonder's "As" as much as it prefigures "Just The Two Of Us," one of the loveliest pop song performances ever.

"Layas" features remarkable solos by both Carlton and Brecker (backed by a Tom Scott-like horn section), and tremendously generous support from Pastorius on bass. The disco-fied "Do It," which was also the album's single and 12-inch dance single, doesn't spotlight any particular soloist - other than Colombier's synthesizer lead - but evidences nice bits of dueling clavinets from Colombier and Herbie Hancock (Hancock again featured on an anonymous keyboard!) and the dueling guitars of Larry Carlton and Ray Parker, Jr.

"Spring" - which also appears on the 2002 CD compilation Colombier Dreams - seems to be the only connection to the album's Vivaldi origins, but in name only. The piece finds Larry Carlton, Jaco Pastorius and Michel Colombier seemingly trading fours, as it were (get it?), with the LSO.

"The Dancing Bull" brings Tom Scott, in his only appearance on the album, to the fore on his signature-sounding lyricon, ably supported by a beautiful fusion bed of Colombier on Fender Rhodes and (Scott's former L.A. Express partner) Larry Carlton on guitar.

The classically-inspired, but brief, "Autumn Land" finds the solo pianist engaging with the LSO. This piece also sounds the most like a film-soundtrack piece - which is not bad, but it's at odds with everything that's come before it.

Truth be told, there was far too much music coming out of the fusion era that was sadly so indistinct as to be generic, which helped obliterate the movement…or slide it ever so regrettably into the "smooth jazz" genre.

Colombier's music deserved better. A different label? A different producer? Certainly the high-caliber of star players here probably deserved better too. High priced session players Lee Ritenour, Steve Gadd and Airto Moreira are almost superfluous here. There is even a feeling that these guys were told to blend in rather than shine. A true shame for players of this magnitude.

As a result, Michel Colombier is one of those fusion albums that boasts a first-rate cast that ends up in a second-tier performance (and unfortunately too many bargain bins). It's good, but hardly great.
Posted by Douglas Payne at 12:32 AM

Hello ! I didn't know Michel Colombier was dead...
I'm in switzerland and I'm looking for that special album with Pastorius and Bercker and I can not find it here !! I will continue my search !!
Really nice and interresting your article about this talented man. Thank You !! Daniela

I must heartily disagree. This is a stunning album. Your comments to the contrary show that you are not qualified to express your opinions on music of any sort.

Michel Colombier got hisself some great sessions with these tracks, i already nocticed that you don't like attempts by jazz musician to conform to the 1974/1978 fusion beats (cf. your words on "Faces", "Nightflight", and, i think "Belsta river" from Gabor Szabo which are three very interesting records), Why is that exactly?

You know why these pieces didn't get much air play? Because there were, and continue to be, far too people even MORE stupid about music than you are. This is a staggeringly stupendous collection of music. One listen to The Dancing Bull alone will convince anybody who really knows music that this is an incredible album, not at all "unfocused", as you so erroneously claim, but overflowing with passion and creativity of a depth and breadth you can't comprehend. I think you're the kind of person who wants people to think you know what you're talking about, but really doesn't have a clue. And the only thing out of focus is your brain.

Totally agree with how out of touch the reviewer is in this genre. This music and the performances of the feature soloists is stunningly beatuiful

If you are looking for a reputable contextual ad network, I suggest that you have a look at Chitika.

Very heartfelt album, especially Bird Song -what a work of art- which I am going to play on my trumpet tomorrow (with this background track) "con mucho sentimiento" and follow Michael Brecker's lead as we donate our God Given talents to raise money tomorrow at Teatro Campesino in San Juan Bautista, CA. for helping people for disaster relief of earthquakes in Mexico and Hurricane in Puerto Rico.
David Rios Sonidos de Jubilo