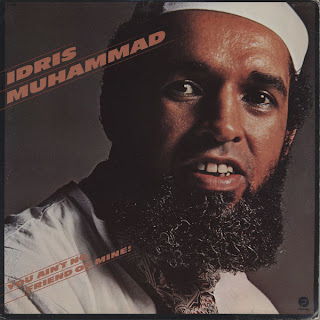 Today's disco discovery: After recording two soulful funk albums for Prestige (where he’d done similar work at the time for other leaders) in 1970 and 1971 and then four rather more interesting albums for Kudu between 1974 and 1977, the great drummer Idris Muhammad recorded three disco-oriented albums for the San Francisco-based Fantasy label between 1978 and 1980.

“See Saw” comes from the first of these albums, You Ain’t No Friend of Mine! (Fantasy, 1978). Guitarist Hiram Bullock wrote the album’s title song and provides vocals and guitar to that song. But as the title is affixed to Idris Muhammad’s entire album – even over the catchier “Disco Man,” which opens the album – it’s interesting to guess at who the “you” of the album’s title might be. I have my thoughts.

Even so, the album’s title just doesn’t square with the manner or method of Idris Muhammad, who has gigged successfully with just as many soul-jazz superstars as avant-garde jazz heroes – and, quite memorably, as of late, with the great pianist Ahmad Jamal.

Idris Muhammad See Saw - The best bloopers are a click away
Still, the focus here is on the album’s second song: the great disco jazz of “See Saw,” written by the ludicrously mysterious “G. T’nig.” That name, which I can’t decipher, certainly must be a pseudonym for the great writer and arranger William S. Fischer, who is credited here as the record’s producer and player of occasional bells, synthesizer and, on this particular occasion, celeste. Oddly, there is no reference here to Fischer being the arranger. But surely, who else could it be?

“See Saw” is an intoxicating brew of dance exotica that samples an intriguing variety of sounds that feature the magisterial second line of Idris Muhammad on drums with Cecil Bridgewater and Jeff Davis on trumpet, Earl McKintyre on trombone, Joe Ford on flute (solo), Ed Xiques on baritone sax, Cliff Carter on keyboards, Hiram Bullock on guitar (solo), Lincoln Goines on bass, Bill Summers on congas, Zakir Hussain on table and the elusive Bill Fischer on celeste.

Listen to the drums. Listen to the horn charts. Listen to the exotic accents (tabla, celeste, flute) – sounds that didn’t often grace the dancefloors of the day. Just listen to it all. It gets more interesting upon repeated listens too.