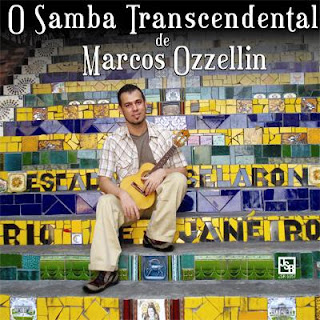 A native of São Bernardo do Campo, in Greater São Paulo, Ozzellin began his career in Sampa during the 1990s before moving to Rio de Janeiro by way of Portugal. He eventually met up with Koorax, who mentored him and has featured him in many of her shows.

For Marcos Ozzellin’s recording debut, producer Arnaldo DeSouteiro fashioned a traditional program, what he calls “probably the most traditional album I ever produced.” But it’s not what’s come to be known as traditional Brazilian music nor is it presented with the typically jaundiced industry eye on inserting a new artist into any sort of standard repertoire.

The program presented here was chosen with care and a great deal of wit.

As a producer, DeSouteiro has helmed a number of Brazilian classics by Luiz Bonfá, Dom Um Romão, Eumir Deodato, João Donato and Ithamara Koorax’s latest jewel, Bim Bom: The Complete João Gilberto Songbook (JSR). But he is also a renowned music scholar, helming reissue programs for RCA and King Records and supervising releases for Columbia, Universal and other labels.

So it’s no surprise that O Samba Transcendental de Marcos Ozzellin, a title right out of the early 60s, speaks of another time or another place – someplace less complicated, perhaps even a happier place (memories are like that). It also tells of samba’s lighthearted face, positive moods, beautiful melodies and unique harmonies.

Here, the program is so varied and unexpected as to be remarkably engaging and ultimately enjoyable. Ozzellin delivers each number with such a verve of personality as to render each tune his own, but many of these tunes have been around for a very long time.

Between the two rather more contemporary pieces, there are several classic sambas from the thirties and forties, beginning with “Treze de Ouro” (1949), originally recorded by the male vocal group Anjos do Inferno and more recently performed by Donato’s and Alf’s 1950s pal, João Gilberto.

One of Brazil’s first international stars, Carmen Miranda, is represented here with several of her hits, including Dorival Caymmi’s “O Dengo que a Nega Tem” (1940) and “Samba Rasgado” (1938). Ozzellin also reaches way back to Noel Rosa’s songbook for both “Com Que Roupa?” (1930) and “O ‘X’ do Problema” (1936), then to Ary Barroso (famous for his standard “Brazil”) with “Quando Eu Penso na Bahia” (1937), also made popular by Carmen Miranda. Jumping up to the fifties, Ozzellin covers “In The Mood ‘Edmundo’,” a Portuguese version of Glenn Miller’s 1939 hit originally done in 1954 by Aloysio de Oliveira, leader of the Bando da Lua that used to play for Carmen Miranda.

Jumping to the 1960s, Ozzellin performs two little known Baden Powell/Vinicius de Moraes songs, “Deixa” (1963) and the Afro-samba “Bocochê” (1966). From the 1970s emerges perhaps this disc’s most contemplative samba, Candeia’s “Preciso Me Encontrar,” immortalized by Cartola in 1976, with the help of Dino Sete Cordas and bassoonist Aírton Barbosa.

Ozzellin visits the 1980s with Padeirinho’s sad, yet hopeful, “Como Será o Ano 2000?” (1983) and finds more optimism in Nelson Angelo’s “A Vida Leva” (1994), a manifesto for living life with joy, passion, and generosity, leaving utopias aside.

Everything about O Samba Transcendental de Marcos Ozzellin speaks to a time when the samba was new. Recall, if you will, “bossa nova” means “the new thing.” At some point, of course, the music wasn’t new anymore.

But, refreshingly, Marcos Ozzellin makes bossa nova feel new again – a cool breeze from the south that offers a respite from the edges we like about jazz, rock or even pop. He could easily cover an album of standards. But O Samba Transcendental de Marcos Ozzellin proves he can do more.
Posted by Douglas Payne at 11:15 PM