Brubeck gets nod from another jazz great 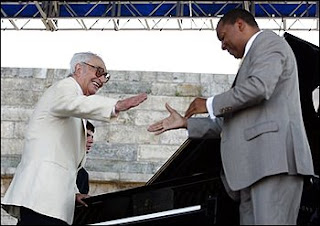 NEWPORT, R.I. -- Jazz legend Dave Brubeck turns 90 on Dec. 6, but the birthday celebrations got off to an early start on the closing day of the CareFusion Newport Jazz Festival.

Brubeck was a late addition to a festival program that included performances by Herbie Hancock, Chick Corea, Ahmad Jamal and Chris Botti on the main stage at Fort Adams State Park.

Wein made a special effort to get Brubeck to this year's festival to sit in with Marsalis' band for the birthday tribute. Brubeck has appeared at Newport more times than any other artist, starting in 1955, the festival's second year.

"It was a very emotional moment because Wynton always has such respect for the older players," said Wein, interviewed backstage after Sunday's performance.

"And Dave was afraid to play with Wynton. He said, `He's a genius, can I play with him?' I said, `Come on, Dave, you could play with anyone, what are you talking about?'"

Marsalis said he didn't hesitate to accept Wein's invitation to perform with Brubeck. "I said, `All of us love Dave so we would be honored to play with him. And it was an honor for us."

The first time the two jazz stars had ever played together was at the 2005 Newport festival when Marsalis sat in with Brubeck's quartet, and this year Brubeck returned the favor.

Introducing Brubeck, Marsalis told the audience that the pianist was more than a jazz legend, but "a man who has represented the very essence of what is American greatness." With Brubeck at the keyboard, Marsalis's band appropriately played the pianist's composition "Blues For Newport," which was introduced at the 1971 festival. Brubeck and Marsalis then performed a tender trumpet-piano duet on the standard ballad "These Foolish Things."

Brubeck expressed his sentiments musically by playing a solo version of his piece "Thank You," the Chopin-inspired composition he wrote and dedicated to the Polish people at the end of his 1958 State Department-sponsored tour of communist Poland at the height of the Cold War. The mini-set closed with Brubeck and Marsalis' band playing a rousing version of the Duke Elllington band theme song, "Take the `A' Train."

"Wynton played so beautifully and all the guys in his band," said Brubeck after the set. "It was a nice thing and I appreciated everything they did."

After their set, Brubeck and Marsalis both spent time greeting and answering questions from several dozen members of the middle school jazz band from the Kipp Amp Charter School in Brooklyn, who were brought to the festival by Jazz'd 4 Life, a nonprofit organization founded by Brubeck's daughter, Catherine.
Posted by Douglas Payne at 1:34 AM