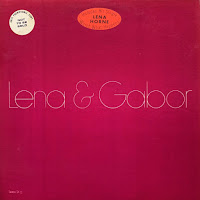 The 1970 album Lena & Gabor is something of a conundrum. It’s a great Lena Horne album, among the first of the legendary singer’s historic “comebacks” and one that finds her successfully tackling a more contemporary program in a jazz-like setting.

But it’s a disappointing Gabor Szabo album. As Cash Box rightly pointed out, “Szabo’s fans should be glad to hear him too, although there probably isn’t as much of him as they’d like on the set.”

The program, too, must have deflated the guitarist. At this point, Szabo was becoming typecast as a Beatles and AM radio hits cover artist – something that worked for Wes Montgomery, but was likely beginning to wear on Szabo’s fans. His renown as well as his record sales were all-too-sadly beginning to recede at this point.

Producer and arranger Gary McFarland is probably the architect who put together the bulk of Lena & Gabor’s program – and it’s superb for Ms. Horne. It’s not the program, however, that sets this album apart for the singer. She was grazing through the pop grass for years. Here, it’s the instrumentation.

Instead of the lush orchestras of yore, Ms. Horne couches herself in a hip small group similar to those that would accompany her on a typical club date. For the sessions, McFarland rounds up Eric Gale (as “Gayle” here) and Cornell Dupree on guitars and Richard Tee on organ (the house band on many Atlantic dates at the time) with the Skye all-stars Chuck Rainey on electric bass and Grady Tate on drums.

It’s easily the combination of Szabo with the electrified Tee and Rainey who rev Ms. Horne up to what Record World magazine called “the freest, youngest, most personal singing she’s done in years.”

Lena Horne (1917-2010) had long been considered a legend, finding instant fame with the song “Stormy Weather,” from the 1943 film of the same name. Her sultry voice and striking good looks – both of which aged exceptionally well – allowed her to remarkably transcend decades and generations practically agelessly.

That “legendary” pendulum swings both ways, though. It’s usually the sort of moniker applied to a has-been, once-was or what Joe Gillis says of Norma Desmond: “you used to be big.” Despite a string of albums on RCA, 20th Century and United Artists, Ms. Horne hadn’t had a hit since 1963’s “Now!” and hadn’t had an album out since 1967’s My Name is Lena. 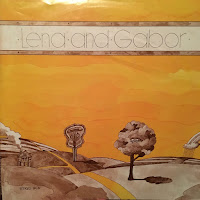 Gabor Szabo (1936-82) had performed with Ms. Horne infrequently since 1964 when the Chico Hamilton group backed the singer at London’s Talk of the Town club. The guitarist was also part of a small group that backed Ms. Horne at Las Vegas’s The Sands hotel in October 1966 and, later, at Caesar’s Palace for three weeks in September 1969.

The guitarist was among the starry guests featured on the September 12, 1969, NBC-TV special “Monsanto Night Presents Lena Horne.” It was on this particular occasion that Szabo was talking with Ms. Horne’s manager, Ralph Harris, about how good and happy Lena sounded in such an intimate situation. The two discussed how great it would be if she could record that way.

“But the major record companies,” according to Record World, “were still thinking of Lena in terms of a big band, show tune sound. Gabor mentioned that he was a partner in Skye Recording Co. and said he thought they might be interested in recording Lena with a small group, if she was. She was. So was Skye.” 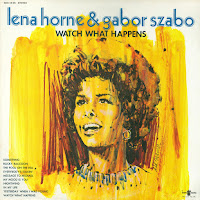 Here, Ms. Horne swings on no less than four Beatles numbers – “In My Life” and “Fool on the Hill” stand out – and covers the Nilsson hit from Midnight Cowboy, “Everybody’s Talkin’” (the original coincidentally featured drummer and frequent Szabo associate Jim Gordon), Roy Clark’s 1969 hit “Yesterday When I Was Young” and Dionne Warwick’s 1966 hit “Message to Michael” (another of the album’s highlights).

The singer’s trademark languid phrasing suits the program perfectly, particularly on “The Fool on the Hill” and Michel Legrand’s “Watch What Happens,” from the soundtrack to The Umbrellas of Cherbourg and now something of a jazz standard.

Bobby Scott’s “Nightwind” is a curious choice, but Ms. Horne acquits herself remarkably well here, giving the song a feeling of a haunted gospel blues. The original is from the 1969 film Slaves (starring Dionne Warwick), whose soundtrack was issued on Skye, and performed by Grady Tate – who, like Gabor Szabo, is strangely absent on this version of the tune.

The album’s sole highlight for me is the far too-little known “My Mood is You.” Written by famed songwriter Carl Sigman (writer of “Pennsylvania 6-5000,” “Ebb Tide,” “Crazy He Calls Me” and later in the year, the hit theme to the film Love Story, “Where Do I Begin”) and first recorded by Jack Jones in 1963, this moody, poetic little gem is perfectly Lena and Gabor.

“My Mood is You” is also Szabo’s single best moment on the record, catching him in more of an apt collaboration with the singer than many of the album’s other pieces. Szabo’s reputation as a soloist is far better known, but one listen to “My Mood is You” reveals how sensitive and intuitive an accompanist he could be.

That’s the problem for Szabo fans with much of Lena & Gabor. Too much of the record casts Szabo as a sideman and occasional guest soloist. One senses Szabo himself wasn’t pleased by the marginalization he gets on his own record for his own label: Szabo abruptly left Skye for Blue Thumb and never again worked with longtime associate Gary McFarland.

Here – and “In My Life” as well – Lena and Gabor weave a potent musical web and cast their unique spell in a performance that is as engaging and entrancing as it is meaningful and memorable.

Gary McFarland’s magnificent outro on “Mood” comes out of nowhere to spellbinding effect - reminding this listener of another striking exit line in Paul Buckmaster’s magisterial outro to Carly Simon’s “I Haven’t Got Time for the Pain.” Throughout, McFarland’s elegant, clever and minimal string and horn additions have the effect of emotive echoes or warm breezes of night air. 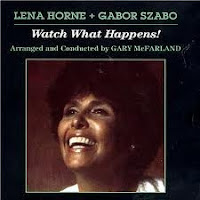 Lena & Gabor was released in March 1970, the same month as Ms. Horne appeared in a TV special with Harry Belafonte called “Harry & Lena,” which, too, featured Ms. Horne covering “In My Life.”

“Rocky Raccoon” was the album’s lone single, but it was the flipside, “Watch What Happens,” that got the airplay. “Watch What Happens” reached #119 on the charts and stayed in Ms. Horne’s repertoire for the remainder of her career. The song’s success likely inspired producer Norman Schwartz to pair the singer with composer Michel Legrand for 1975’s Lena & Michel (also featuring Lena & Gabor’s Cornell Dupree and Richard Tee). “Watch” also turned out to be one of the highlights of Ms. Horne’s 1981 Broadway hit Lena Horne: The Lady and Her Music.

Lena & Gabor peaked on the Billboard 200 at number 162 in July 1970 (only one of five of Ms. Horne’s albums to crack the Top 200) and reached number 11 on the Jazz charts, likely because of Szabo’s participation. But even though the album was welcomed by fans of the singer and the guitarist alike, who sensed the natural chemistry between the two players, there were signs that something was amiss. 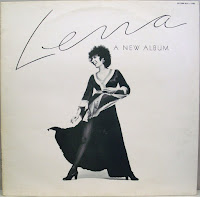 For an album by one of the most beautiful women in the world, blessed with one of the most iconic of all faces, it is astounding that Ms. Horne’s visage appears nowhere on the album. It must be the only Lena Horne album ever issued without her famous face. Indeed, the only “artwork” on the two-color sleeve is typographical. It is elegant but it’s odd.

This is also the only single-sleeve album by a Skye principle, lavished elsewhere with four-color gatefold sleeves throughout their Skye discographies.

Early reports indicated that fashion photographer Richard Avedon, who shot Ms. Horne for Vogue during her Caesar’s Palace run, was tapped to photograph her for the album’s cover and liner sleeve. None of that happened – but if it did, perhaps the Avedon photo on the cover of the 1976 record Lena, A New Album was the result.

Even stranger, an initial test pressing of the record featured artwork and design by Peter Smith, who provided artwork to other Skye releases like Gabor Szabo 1969 (1969), Gary McFarland’s Today (1970) and the album he did with Gary McFarland, Butterscotch Rum (1971). Cool as the cover is in Smith’s typically Yellow Submarine way, though, it seems totally inappropriate to Ms. Horne and what she is doing here. Seems someone else thought so, too.

There is a sense, however, that the money just wasn’t there. And indeed, Skye was very quickly falling apart. Szabo, the label’s only moneymaker, left soon after this record came out while Cal Tjader seems to have withdrawn as well.

The label was able to issue two more records (and had to pass on issuing the soundtrack to Brian DePalma’s early film Hi Mom!), before securing a distribution deal with Buddah Records in late 1970 to keep it afloat.

Lena & Gabor was reissued as Watch What Happens in November of that year with a Buddah number, a mere three places up in the Skye numerology. This time, at least, Ms. Horne’s face could be seen on the cover, though in a cheesy drawing that made the album appear cheap or bootlegged.

In fact, there have been relatively few times in the album’s half-century history when it has been out of print. Ironically, that makes it the only one of Gabor Szabo’s albums to remain consistently available and in print in one form or another.

Lena and Gabor would reunite once again in 1973 for an episode of The Flip Wilson Show, where they performed Kris Kristofferson’s lovely “I’ve Got to Have You.” But their paths didn’t seem to cross much after that.

If Lena & Gabor, the pair’s one and only recording together, doesn’t always rise to meet a certain set of expectations, experiencing Ms. Horne’s luxurious vocalizing dance with Mr. Szabo’s jangled melodicism is a pleasure well worth savoring over and over again.

While Lena & Gabor is admittedly not among my favorites, the ecstasy and joy of my Gabor Szabo experience would be incomplete without this album’s “In My Life,” “Message to Michael” and, most especially, the magnificent “My Mood is You.”

I had the great honor and pleasure to talk with Ms. Horne in 1995. It was she who called me, one day out of the blue – while I was at work! – responding to a letter I sent her asking if she’d talk with me about Gabor Szabo.

Never was there a lovelier lady. I was amazed by just how friendly and genuinely down to earth this superstar was. Hearing that familiar voice talking to me – me! - in that gorgeous Southern Belle (which she was anything but) drawl was such a rush.

She had very little recollection of the album Lena & Gabor – probably because she identified “Watch What Happens” with her Lena & Michel album. But, wow, did she recall Gabor Szabo. Ms. Horne had such great respect, admiration and love for the guitarist.

“He had such a way,” she told me over and over again. One of the world’s most distinctive, celebrated and well-loved vocalists of all time told me that Gabor Szabo “always made me sound better.”

Our brief conversation was less interview and more reminisce, but more pleasurable than a back-and-forth information exchange could ever be. God bless Lena Horne.