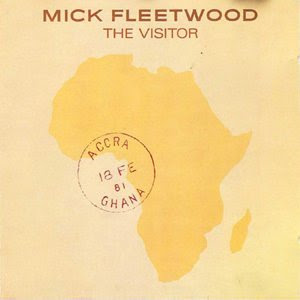 Been diggin’ great pop melodies and covert pop brilliance lately and this one really comes up aces on all fronts.

From my days of buying just about any record that came out, this is from Fleetwood Mac founder Mick Fleetwood’s 1981 solo debut The Visitor - which, to my knowledge, has never made it onto CD. An attempt to capture the musical sounds of African percussion, the veteran rock drummer crafted a great album of his own that had little to do with the arena-pop music his money-making band was producing at the time.

The song is voiced – rather magically - by George Hawkins, Jr., a bassist, guitarist and vocalist for Kenny Loggins and a session player on many huge hits by Sanford/Townsend Band, Firefall, Stevie Nicks, Gary Wright and The Monkees (he was also on the Kenny Loggins/Stevie Nicks hit “Whenever I Call You Friend”).

The late, great George Harrison is on background vocals as well as playing the lush 12-string guitar and the audibly delicious slide guitar heard here (he is also said to have played on the Fleetwood Mac original). The Ghanaian Adjo Group chants the beautiful background vocals.

It’s a lovely performance. “Walk A Thin Line” was also issued as a single at the time and for its pure pleasure, it is a song that deserves to be much better known than it is.
Posted by Douglas Payne at 11:28 PM

You already know I love this song. Request publish the lyrics. LOVE YOU. kp :)

Follow our trades right now and profit up to 270% per day.