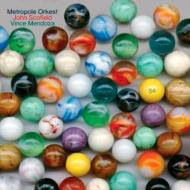 This tremendous return to the too-little respected and too-infrequently recorded form of music known as orchestral jazz gets its title by the number of musicians - who total 52 – that participated in the studio recording plus the two leaders, guitarist and composer John Scofield and composer, arranger and conductor Vince Mendoza. Bravo to the leaders for giving credit to all the musicians involved here.

If anyone can make this splendidly contemporary trip down old paths captivating or memorable, it is certainly Vince Mendoza, who aside from such excellent work on his own recent discs, (ACT, 2009 – also with the Metropole Orchestra) and Blauklang (ACT, 2008), has also scored memorably wonderful recent recordings with Elvis Costello, Joni Mitchell, Joe Zawinul, Bjork, Kyle Eastwood and Randy Brecker.

And if anyone in the current jazz sphere of soloists can make you stand up and take notice, it is certainly guitarist John Scofield.

While the program under review offers up no new material, it is certainly a stirring set that was worth the effort. This March 2009 recording finds John Scofield revisiting his own “Honest I Do” and “Twang” (both heard first on the 1992 CD Grace Under Pressure), “Imaginary Time” (first appearing on the 1993 CD What We Do), “Out of the City” (originally on the 1994 CD Hand Jive), “Carlos” and “Peculiar” (both originally heard on the 1998 Blue Note CD Groove Elation), and “Polo Towers” (first heard on the 2001 Verve CD Uberjam).

Vince Mendoza rescores his own “Jung Parade” and “Say We Did,” both of which were first heard on the 1991 Japanese-only CD Instructions Inside, which also featured John Scofield as a soloist (the two leaders were first recorded together on Vince Mendoza’s 1989 album Start Here).

Mendoza arranges the bulk of the material, while keyboardist Florian Ross arranges “Imaginary Time” and keyboardist Jim McNeely is listed as arranger of two tracks (despite one of the credited tracks not existing on the CD).

On the whole, both Scofield and Mendoza are exceptionally imaginative – and not necessarily at the same time. It’s as if neither wants to get in the other’s way. Mendoza’s orchestrations often shine when Scofield’s soloing is merely up to par. Take, for example, the superbly colorful “Carlos,” the brassy second half of “Twang,” the brilliantly Ellington-esque way Mendoza handles “Peculiar” (which elicits a particularly funky un-Ellington guitar solo from Scofield, worth further investigation, and Hans Vroomans’ inspired organ solo).

And vice versa. Scofield himself shines superbly throughout, but never as exceptionally as on “Jung Parade” and the first half of “Twang.”

The two collide terrifically in their collaboration on the near Blaxploitation groove of “Polo Towers,” the glitzy near Mancini-esque sheen of “Out of the City,” the lush, gorgeous and too-jagged-to-be-a-soundtrack-cue, “Honest I Do,” the superbly imaginative, yet too brief “Imaginary Time” and the delicious collaboration - dominated by Mendoza’s lovely charts - that is “Say We Did.”

Mendoza has always been particularly adept at beautifully coordinating acoustic and electric elements. And Scofield’s often funky fusion tendencies allow the arranger to provide several colorful scores that recall some of the best work of such under-sung 70s arrangers as Johnny Pate, J.J. Johnson, David Matthews, Gene Page and David Van DePitte. But there is also a great sense of the historic work such 60s background soundscapers as Oliver Nelson, Lalo Schifrin or Gary McFarland crafted in their day.

Like partners in crime, John Scofield and Vince Mendoza paired together makes a great deal of sense. These are artistic temperaments that are well-suited to one another. Unlike the exceptionally enjoyable partnership Scofield forged with Marc-Anthony Turnage on the 2003 disc Scorched (Deutsche Grammophon), there is a chemistry on 54 that works not only as a fun listen but also as an accomplished and solidified piece of contemporary orchestral jazz. One can only hope there is a lot more of this in store.

FreedomPop is the only COMPLETELY FREE mobile communications provider.