“Tell Me Tomorrow” by Smokey Robinson 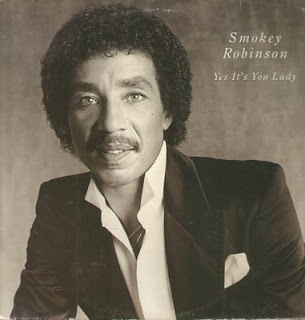 Today’s disco discovery: In disco’s waning days, even those lords of pre-disco soul music were still trying to jump on the bandwagon to get a hit. The great, great singer/songwriter Smokey Robinson had surprisingly already scored “comeback” hits with “Cruisin” in 1980 and “Being With You” in 1981, both masterful Quiet Storm templates.

The singer’s few previous attempts at getting down and groove-based music had not really made the headway these lightweight hits had – nor had they captured the attention that such contemporaries as Marvin Gaye and others had found in this realm.

But by 1982, something changed. Either Smokey figured out a way to combine his romantically melodic forces with a flat-out R&B groove or someone did it for him. The result is the majestic “Tell Me Tomorrow,” the lead track and first single from the singer’s 1982 Tamla/Motown album Yes It’s You Lady. However, it turned out to be only something of a minor hit.

The song, oddly enough, is more of a production number particularly fashioned for the romantic crooner rather than something of his own design. Still it's a beautifully romantic piece that has as much jazz as funk going for it. Either way, it’s a great groove and fits him like a glove.

“Tell Me Tomorrow” was written by Gary Goetzman and Mike Piccirillo and produced and arranged by George Tobin (best known later as the brains behind the questionable teen sensation Tiffany). Piccirillo and Tobin, who helped craft “Being With You,” are also well-known for producing hits by Robert Johns (“Sad Eyes”), Kim Carnes (“More Love”), Natalie Cole, New Kids on the Block and others.

The album version of “Tell Me Tomorrow” totals nearly six and a half minutes and features a magnificent, memorable solo from pianist Bill Cuomo. The single release (which is the version I had) featured a 3:48 edit on the first side, with a mostly instrumental version on the second side (fair warning: the edited version without the piano solo is much better known and featured than the full song). Guess which side I played repeatedly?

This was a favorite of mine in 1982. It continues to bring me joy today.
Posted by Douglas Payne at 10:22 PM