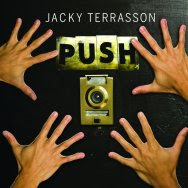 For his 11th solo album, pianist Jacky Terrasson (b. 1966) opted to "push" himself in new directions. The result was well worth the effort. After a long string of albums on the Blue Note label, the pianist makes his debut on the Concord label, now the definitive home of major-label, mainstream jazz, crafting one of his best efforts to date. The pianist's intention was to go for something different than he's done before – which is both good and sometimes not so good. But the end product is overall a remarkable and highly enjoyable listen.

Jacky Terrrasson has always suggested the crossroads pianism of Keith Jarrett's 70s work and Chick Corea's 80s work, with all the good and the bad that both appellations suggest. But here, he really refines the groove into a statement all his own. Push is made up, mostly (and rather unusually), of Terrasson's fascinating originals and several enchantingly original takes on jazz chestnuts including "Body and Soul" and "You'd Be So Nice To Come Home To" and two Monk standards, "Ruby My Dear" and "Round Midnight." Backed by a tremendously interesting group including Ben Williams on bass and Jamire Williams (no relation) on drums and several "guests," Terrasson has really never sounded better.

The cleverly titled "Gaux Girl" opens the disc beautifully, suggesting the gospel funk Keith Jarrett has done at his most lucid and soulful. Terrasson shines here, adding brief electronic touches that are one or two steps shy of orchestral, but subtly sweet all the same. The pianist's terrifically snappy "Beat Bop" suggests Oscar Peterson by way of Bobby Timmons, Michel Camilo and Josef Zawinul. A great, yet too brief, performance, it must be heard to be believed. "My Church" presents the pianist at his most soulful. But he tempers his performance with reflective and passionate ruminations that never allow the song to degenerate into mindless funk. "My Church" also showcases bassist Ben Williams most notably. Terrason's sensational "O Café, O Soleil" ends the disc in a most inspiring way, with a fun, intoxicating Calypso groove the worldly pianist has not really expressed so well before.

Monk's "Ruby My Dear" gets a lead performance from harmonica player Gregoire Maret, who transforms this overplayed standard into something wholly new and interesting. Terrasson is more like an accompanist here and simply fascinating – suggesting Bill Evans with Toots Thielemans on 1978's Affinity – but both Terrasson and Maret are consistently more involved and invigorating than their predecessors and yield an utterly exquisite performance as a result. "Carry Me Away," easily reminiscent of Bill Evans at his best (particularly "Waltz for Debby"), is a duo performance with bassist Ben Williams, who suggests Marc Johnson in this performance. But at only a little over three minutes, it seems that both players had far more to offer than what is heard here.

Terrasson's "Say Yeah" is a gospel groover that introduces his minimalist vocals. Again, the presence of Maret references the work of Toots Thielemans, but here the suggestion implies the harmonica/whistler's great body of work with Quincy Jones and, by implication, the great piano work of Bobby Scott. Terrasson cleverly combines Michael Jackson's "Beat It" (unrecognizably) with the evergreen "Body and Soul" – and comes up with a most dynamic performance. Same goes for the greatly involving take on "You'd Be So Nice To Come Home To," which gets expressively muscular support from both of the Williams in the rhythm section.

So where does Push veer off course? There are only several odd turns here, which probably come as a result of the pianist serving as his own producer. First, there's the unnecessarily showy, near cocktail jazz of "Round Midnight" (referencing any number of pianistic influences). Terrasson can't seem to make up his mind what he wants the overplayed standard to be or where he wants it to go. The curiously attractive "Morning" introduces tenor saxophonist Jacques Schwarz-Bart (of Roy Hargrove's The RH Factor) in his only performance on the disc. He plays well enough. But this song, which appears in the very middle of the album, sounds out of place – even half-thought out. Terrasson, for his part, performs immaculately. While "Morning" is a good performance, it probably just belongs on another album.

Still, at nearly 57 minutes <em>Push</em> seems somehow too short. Though, perhaps, it was wise that Jacky Terrasson didn't "push" it too much. <em>Push</em> is a positive step forward that will hopefully lead this tremendously interesting pianist to even higher levels of musical expression.