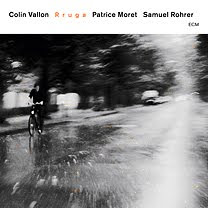 French jazz pianist Colin Vallon’s ECM debut is the third disc under his own name, following Les Ombres in 2004 and a disc on the Hatology label, Ailleurs in 2007. Needless to say, an appearance on ECM gives this trio a certain credibility – or cache (more on that later) – and an international presence the previous discs have not offered.

The album’s ECM-ish title is Albanian for ‘path,’ ‘road’ or ‘journey,’ an absolutely apt description of the trek this trio takes, despite however many other ECM titles have used or deserved this particular appellation in English or other languages. The trio, comprised of the pianist, bassist Patrice Moret and drummer Samuel Rohrer, certainly embarks upon some sort of a journey here. But it’s hard to say whether the program or the trio goes anywhere.

This is exactly the sort of highly personalized and seductively contemplative musicianship so amply evident elsewhere in hundreds of records in the ECM catalog. But while it has points of interest along the way, too much of it all seems so stridently serious.

The cover photograph, another one of ECM’s lovely photos taken from a moving vehicle, shows a bicyclist in the rain, while jacket photos show children at play (predictably in black and white). This sort of uninhibited joy and enjoyment – even the cover’s necessity of getting somewhere despite the means and the prevailing conditions, perfectly illustrating the album’s “rruga” – isn’t really felt in the music.

The young and handsome Vallon and his trio are a wee bit too earnest throughout, “challenging conventions of the modern jazz piano trio,” as the ECM publicity proclaims. Commendably, theirs is not the exploration of the song form or melodic convention of the cliché-ridden jazz piano trio plying Tin Pan Alley tunes and meaningless originals so much in evidence in countless recordings and any hotel lounge.

Theirs is more of the organic cycle of introspective moods and unexpected colorations that yield to music that is more emotive, expressive and as personalized as so much ECM music often is. Just because they’re operating in a piano trio doesn’t make them jazz.

And while it’s certainly creative, it hardly ever conforms to standard jazz strictures. Like jazz, you either get it or you don’t. Unlike so much jazz, though, it will baffle you if you expect it to act as background music. It forces you to pay attention – or ignore it.

This is not to say this particular cache is without interest. Moret’s opening “Telepathy” perfectly encapsulates the synergy this trio has together, despite the fact that it was inspired by the phrasing of Radiohead singer Thom Yorke.

Rruga annotator Steve Lake (yes, an ECM album with notes!) likens this particular track to a cross between Scott La Faro’s “Jade Warrior” and Annette Peacock’s “Mr. Joy” (best known in its interpretation by Paul Bley). But my guess is that Brad Mehldau and The Bad Plus are much more relevant points of inspiration and motivation for the Vallon trio than the old-schoolers – many of whom have made their mark on ECM – that made this sort of trioism possible today.

The album’s best moments come when all three musicians seem most engaged, especially on drummer Rohrer’s dynamically ambiguous “Polygonia,” Vallon’s fascinating “Meral,” the strikingly melodic “Noreira” and “Rruga, var.,” a much livelier take of the disc’s title song. At moments like these, the group almost tends toward the soulful, something they either shun for the most part for whatever reason or avoid altogether because they think they’re supposed to.

For better or worse, Rruga is the prototypical ECM recording: eloquently crafted and elegantly performed by iconoclastic musicians doing exactly what they want. But sadly, it's not as memorable as it could or should be.

Live, on the other hand, the Colin Vallon Trio is a different story altogether. Where is this warmth and passion on Rruga?

Nice review. Note, however, that Vallon and his sidemen Moret and Rohrer are Swiss, not French.

Find Out How You Can Master Your Habits And Reprogram YOUR Subconscious Mind To Get Any Result You Want In Your Personal Development and Fulfillment!