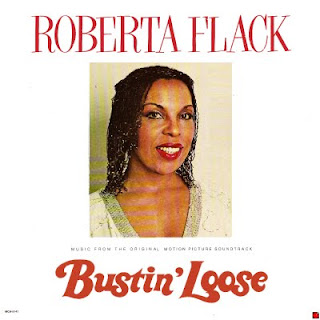 This song has always been one of my very favorites. “Children’s Song” is a little-known tune from Roberta Flack’s little-known soundtrack to the little-known Richard Pryor/Cicely Tyson film Bustin’ Loose (1981).

This touching film, suggested by a story from Richard Pryor himself, finds ex-con and parole violator Joe Braxton (Pryor) hired by a school teacher, Vivian Perry (Tyson), to drive a group of special-needs kids from the Philadelphia shelter they’re housed in and due to be shut down to Ms. Perry’s Washington farm. Of course, Braxton hates the job and Ms. Perry’s lover tries his best to get Braxton back to prison – and get the kids back to Philadelphia. But Joe and Vivian learn to work together to provide the kids with some sort of hope and a future filled with people who care about them.

It doesn’t sound feasible at all. But the pairing of Richard Pryor and Cicely Tyson is inspired. The two have a remarkable chemistry as polar opposites.

And Roberta Flack provides a particularly dynamic set of songs (composer Mark Davis is credited with providing the film’s score), which found an album release on MCA Records in 1981, the year before Flack scored her huge – and great – movie hit “Making Love” (which was actually written by Burt Bacharach, Carole Bayer Sager and Bruce Roberts).

“Children’s Song” is a beautiful piece of the funky Gospel-like ephemera that Roberta Flack is so adept at. The tune is as catchy and simple as are the lyrics:

Participating musicians are unknown, but it’s a good guess that co-writer Barry Miles helms the predominant synthesizer and the great Dom Um Romão mans much of the exciting percussion fills that make this song so fun. Also Tisha Campbell, Judson Dean, Michelle Lewis and Jamie Murphy are on vocals.

There’s plenty of good music on this soundtrack including the poppy “Just When I Needed You,” Luther Vandross’ “You Stopped Loving Me,” Robert Flack’s instrumentals “Qual e Malindrinho” and the funky Prince-like “Rollin’ On” and Marcus Miller’s should-have-been-a-hit “Lovin’ You (Is Such an Easy Thing to Do.)”

But my favorite is and always will be “Children’s Song” (anybody else hear where Prince might have copped "Sign 'o the Times"?).
Posted by Douglas Payne at 12:39 AM

Thanks for posting this, I loved this song since I heard it as a child. now I own a film company and I cant wait to try and put this song in a film. This is the only place I could find it.

Forever one Of my fave movies and songs it makes me think about my upbringing during the 70's my family and I loved that movie and the music.

Thank you so much for posting. It's myself, my brother's and sister's favorite movie growing up.

You can listen free In My Feelings Marimba ringtone online or download the tune and put on a call for your phone.

I have set this song as a ringtone

Do anyone know the name of the first song playing? It's jazz