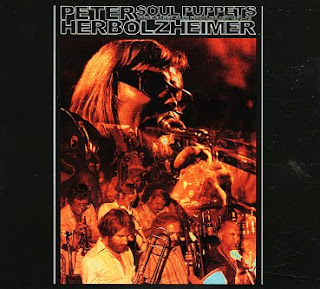 The great composer, arranger and trombonist Peter Herbolzheimer (1935-2010) probably ranks as one of Germany’s best-known bandleaders, having helmed not only his popular Rhythm Combination & Brass (RC&B) but leading many big band orchestras on stage, TV and radio.

The RC&B made for a unique sound in the seventies, mixing jazz with fresh rock, funk, Gospel and Latin elements and coming up with a sound that made typical big bands of the day sound old and tired by comparison.

The result was an electrifying sound that swung and got down more than most jazz ever has.

During his prolific RC&B days in the early 1970s, Herbolzheimer and company recorded a number of titles for the German sound library publishers Altaxon and Edition Panther. This music was primarily intended for use as background music in films, television and advertising and was not usually made available to the general public.

Library music thrived in Europe during the 1960s and 1970s (American unions have generally prohibited these sorts of recordings) and some of music’s greatest composers and performers have made much of the music heard in so many backgrounds – usually without any credit of any kind.

Nowadays, “sound library” recordings are plentiful on CD, revealing the authors to be some of music’s heaviest heavyweights, including some from the world of jazz. These musicians probably supplemented their jazz expeditions both financially and artistically by providing this anonymous library music to publishers.

Turns out Peter Herbolzheimer is one of those guys and his RC&B provided the musicianship to many a library track.

Soul Puppets collects 14 of these, previously unknown and never-before officially released library tracks recorded by Peter Herbolzheimer between 1970 and 1975 in Cologne and Munich with the legendary musicians of his exciting Rhythm Combination & Brass.

Library music does not typically identify individual players, but the explosive RC&B signature is much in evidence throughout this disc, surely suggesting the participation of such artists of the magnitude of Herbolzheimer himself as well as Art Farmer, Dieter Reith, Herb Geller, Dusko Goykovich, Ack van Rooyen, Palle Mikkelborg, Siegfried Schwab, Tony Inzalaco, Philip Catherine, Peter Trunk and others.

By definition, library music is designed to either establish/enhance a mood or suggest something by hinting at something more familiar. The familiar is fertile here in the “Mas Que Nada”-like opener “Latin Groove,” the “Spooky”-like “Count Down,” “The ‘In’ Crowd”-like “Botafogo,” (Lee Morgan’s) “The Sidewinder”-like “Groovy Spider” and “The Girl From Ipanema” meets “The Gentle Rain” bossa “Windy Corner” – all groovy riffs that are new enough to merely hint at their well-known cousins.

The predominant mood of Soul Puppets - like so many library-music compilations - is funk and no one injected funk into a big band as expertly as Peter Herbolzheimer did – unless it was another jazz composer who also dabbled in the form, like those jazz players who also wrote film music.

The jazz of the day gets a fair hearing too with the classy CTI spin of “Orange Faces,” the Prestige organ groove of “Count Down,” the elegant “Why Is The Sun Never Crying,” which hints at Gil Evans’ 1973 classic Svengali (with a dash of Diamonds Are Forever-era John Barry thrown in for good measure) and the Mainstream-era Blue Mitchell-like funky blues “Hot Spot.”

This particularly well-programmed set is good from start to finish, but several highlights stand out, including “Why Is The Sun Never Crying,” “Walking Tiger,” “Orange Faces” and “Smiling Lips.” These titles alone, while intentionally derivative, merit attention as superb originals and ably withstand scrutiny on their own terms, due mostly to the powerful performance provided by the predictably tight and swinging RC&B. Herbolzheimer’s group injects a solid and creative jazz quotient to keep the music from ever getting as backgrounded or boring as so much of this kind of music often is.

Soul Puppets is an excellent and essential addition to the discography of Peter Herbolzheimer’s Rhythm Combination & Brass discography.
Posted by Douglas Payne at 4:39 PM

Start following our trades NOW and profit up to 270% per day.

Seeking to join new affiliate networks?
Visit this affiliate directory to take a look at the ultimate list of affiliate programs.