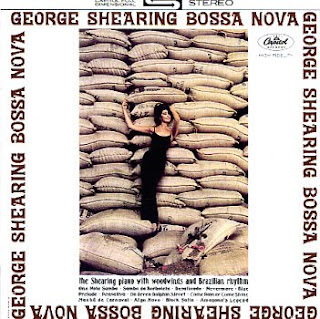 The Japanese branch of EMI Toshiba has just issued 50 budget-priced CDs as part of its “Jazz 999 Best & More” series, including the tremendous George Shearing Bossa Nova, the late pianist’s lovely 1963 album, his first such experiment in the Brazilian fad that swept the Western world in the early half of the 1960s.

Caught up in the Bossa Nova craze that swept through jazz and popular music in the early 1960s, pianist George Shearing makes – perhaps – the first of his 1960s records that marks itself of its time.

Released in May 1963, George Shearing Bossa Nova finds Shearing’s piano set off rather remarkably by sensitively deployed woodwinds and “Brazilian rhythm,” all arranged to immaculate perfection by the great Clare Fischer, who had already arranged quite a number of Cal Tjader albums as well as several Bossa Nova albums on Pacific Jazz for the great saxophonist Bud Shank, who is surely one of the unnamed reed players heard here.

The well-tempered program mixes such cleverly considered Bossa Nova standards as “One Note Samba,” “Desafinado” and “Manha de Carnaval (Morning of the Carnival)” with jazz standards “On Green Dolphin Street,” “Come Rain or Come Shine” and “Blue Prelude,” done up in a refreshingly Bossa Nova style that sounds entirely compatible with the Latin styles Shearing popularized in the past.

Shearing sounds absolutely at home here, which prompts one to ask why he didn’t further explore either more Bossa Nova music or albums coated in Brazilian rhythms? Perhaps it just wasn’t his bag. Or maybe Capitol didn’t want him to veer too far from the lucratively lush loveliness of the orchestrated Quintet sound.

Guitarist Laurindo Almeida is no doubt another of the unnamed musicians featured here – prominently on “Desafinado,” “Nevermore,” “Come Rain or Come Shine,” “Algo Novo,” “Black Satin” and his own “Amazona’s Legend” (which has not been recorded elsewhere) – as he is distinctively featured (though mysteriously unnamed) and considered one of the first musicians who introduced Bossa Nova to the United States.

Additionally, Almeida was under contract to Capitol at the time and the company was all about pairing Shearing with Capitol recording artists like Nat King Cole and Nancy Wilson. Almeida had waxed Viva Bossa Nova! for Capitol a few months earlier, an album that also featured “One Note Samba” and “Desafinado” covered on George Shearing Bossa Nova, as well as the April 1963 release of Ole! Bossa Nova! that precedes George Shearing Bossa Nova by one catalog number.

It’s a shame – and a shock! – that the company didn’t see fit to name Laurindo Almeida on the record. This would have made a notable duo record for both the pianist and the guitarist.

The George Shearing Bossa Nova album has been newly re-mastered as part of the limited-edition “Jazz 999 Best & More” series (and sounds spectacularly lovely) from EMI Toshiba, exclusively available in Japan from the Capital, Jubilee, Colpix, United Artists, Pacific Jazz, World Pacific, Roost, Roulette and even Sue (!) archives – most of which is available for the first time on CD and all of which will probably go very fast. Here is what else is available in the series:

An interesting find in that list:Les McCann & the Jazz Messengers. In the US,all of the studio JC stuff was released in a Mosaic box or on a couple of odd and end releases,with the exception of some big band sides,a single or two and the McCann album.And all of the JC live albums were released,except for Lighthouse '69,so the McCann album is quite a find. Tough to find on original vinyl,too.

can you tell me where can i get/buy online for (1962: Shearing Bossa Nova — Capitol).
please e-mail me at (ambilim88@hotmail.com)
thank you~~~

There's a chance you are eligible to get a free $1,000 Amazon Gift Card.