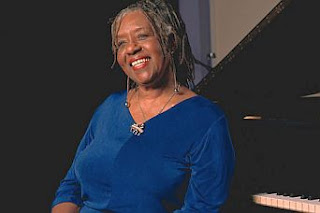 I was very sad to learn today of the December 19 death of the great Philadelphia organist Trudy Pitts, who contributed far less to the recorded jazz canon than she should have, but was expert enough to make an impression upon me – and many other listeners – on the too-few recordings she made. 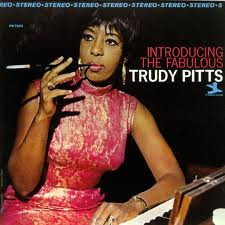 These recordings include several 45s on Coral (1962’s “Theme from “Exodus’” / “I Really Mean It” and 1963’s “Meetin’ Place” / “Swingin’ Bonnie”) and her better known albums on the Prestige label, Introducing the Fabulous Trudy Pitts (Prestige, 1967 – featuring the single “Steppin’ in Minor”), These Blues Of Mine (Prestige, 1968) – these first two albums were combined on one CD titled Legends of Acid Jazz: Trudy Pitts with Pat Martino (Prestige, 1999) - A Bucketful of Soul (Prestige, 1968), The Excitement of Trudy Pitts (Prestige, 1968); as well as other discs such as Me, Myself and I (Scorp Leo) and Live at the Great American Music Hall (Doodlin’, 2009). 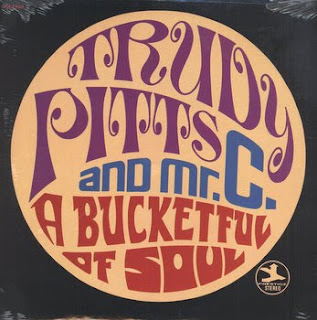 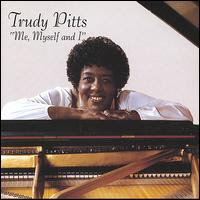 Ms. Pitts performed live, mostly with her husband of more than 50 years, drummer Bill Carney (aka Mr. Carney, then later Mr. C), mostly in Philadelphia, but also in many venues throughout the world - and often with some of jazz’s best known players. The great lady, who was not only a tremendously wondrous pianist but also, since 1991, an educator at Philadelphia’s University of the Arts, was a spirited musician who could breathe glorious life into any musical situation. 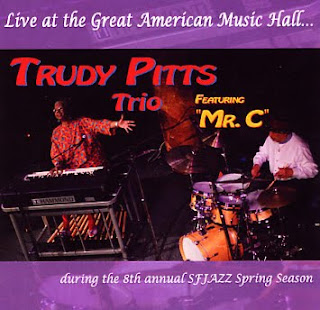 Ms. Pitts will be missed by many...especially those who care about music and the organ tradition that she plied beautifully and tirelessly. Here is the Philadelphia Inquirer obit: 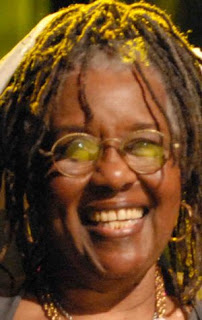 Trudy Pitts Carney, 78, a Philadelphia-born jazz organist, pianist, and vocalist who played with many jazz greats over a career that spanned more than four decades, died of pancreatic cancer Sunday, Dec. 19, at Chestnut Hill Hospital.

She had been living in West Oak Lane with her husband, William Theodore Carney II - Mr. C. - a percussionist with whom she had a long musical partnership and a marriage of more than 50 years.

Shirley Scott had been Mr. C's organist, and Trudy Pitts replaced her when Scott left. They married a few years later.

"Trudy was one of my favorites," Perkins said. "I often told her that she mixes genres of music like no one I ever heard. She was classically trained; she played in the church and assimilated jazz. She could put them all together, complementing all and offending none. That was her strong suit. When you have that kind of suit, you don't need anything else."

Mrs. Carney was born in South Philadelphia and stayed in the area all of her life, said her daughter, Anysha.

She played with jazz greats John Coltrane and Rahsaan Roland Kirk, among others, her daughter said. Actually, "she didn't play with them; they played with her. Just about whoever you could mention played with her."

Mrs. Carney was perhaps best known for her work on the Hammond B3 organ, which she helped popularize in the 1950s and '60s.

"She was a major, major artist in the evolution of that instrument," said Pat Martino, a Philadelphia-born jazz guitarist who played with Mrs. Carney and her husband and who was a longtime friend. Martino played on Mrs. Carney's 1967 album, Introducing the Fabulous Trudy Pitts, and its follow-up, These Blues of Mine.

"They were a team, in every way," Martino said of the couple.

Mrs. Carney "was completely fluent in the language of music, in every way," Martino said. "She had the ability to take the shape of whatever she was poured into - she was so good under any circumstance."

Beyond Mrs. Carney's musical abilities, Martino said, "she was an exceptional individual who transcended her gift as an artist and became transcendent as a person. She was magnificent - she radiated the presence of love under every condition I've seen her in."

In addition to her husband and daughter, Mrs. Carney is survived by her son, William Theodore Carney III - TC III, a jazz vocalist.
Posted by Douglas Payne at 10:45 PM

Thank you for your posts on Trudy.
She was a wonderful player and a wonderful friend to me. We got acquainted about two years ago through a radio interview with Joan Cartwright of Women in Jazz South FLA, which lead to us doing an organ summit together with Gloria Coleman (RIP) in April of 2009.

This year has been tough losing Gloria, Gene Ludwig, and now Trudy.

A video from the summit of Trudy is here:
http://www.youtube.com/watch?v=P28bb5piXLs

Just home video quality on this one, but a treasure.

Thank you, again, Linda, for reading. I'm so sad about the loss of Trudy and Gene - and I'm even more saddened to learn of Gloria Coleman's death, which I did not even know about. Kudos to you for not only keeping the art alive with your own music, but providing us all with your extensive understanding and appreciation of the Hammond B-3 art and your incredible knowledge of the organic practioneers that fewer and fewer people understand or appropriately appreciate today.

Thanks, Doug. It's been a tough year in the B3 world losing all these people. When Gloria and Gene passed, Trudy and I talked about these things quite a bit and how few B3 players were left from "back in the day."

Constance James is also in a sad state over the passing of her father's wife.

Buy SustanonInterior Designers MiamiI've heard this CD. they are very good. I really like. thanks for sharing ...: x