Eddie Henderson “For All We Know” 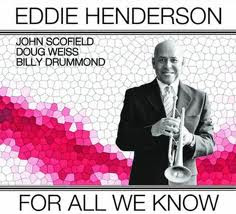 Exactly four decades after making his recording debut as part of Herbie Hancock’s forward-thinking Mwandishi band, trumpeter Eddie Henderson waxes more traditionally and reflectively on For All We Know (Furthermore Recordings). Recorded in New York City on September 23, 2009, For All We Know is Henderson’s first disc since 2006’s Precious Moment (Kind of Blue).

Henderson, who left music in 1980 to practice psychiatry full time, returned to the jazz scene in the late 1980s as more of a derivative stylist than the maverick he had started out to be. Ever since then, he’s produced a number of very traditional-sounding discs that have not really had the impact his earlier recordings on Capricorn, Blue Note and Capitol from the 1970s did.

With one particularly notable exception, For All We Know isn’t much different.

The mostly unremarkable program here includes a handful of unexceptional originals (“Sand Storm,” “Popo” and wife Natsuko’s “Be Cool”), the already overplayed “Jitterbug Waltz” and some fairly well-conceived takes on such ballads as “For All We Know” and “By Myself.” Of note here is drummer Al Foster’s “Missing Miles” (Foster was Miles Davis’ drummer from 1972 to the end of his life). Henderson had guested with the Foster quartet, of which bassist Doug Weiss was a member, for a 2007 performance (issued on DVD as New Morning: The Paris Concert) that included this pensive number as well as “Cantaloupe Island.” With odd arrangements and a seeming level of disinterest among the players, both “Missing Miles” and the oddly unfocused and surprisingly unfunky take on former boss Herbie Hancock’s “Cantaloupe Island” here seem like little more than missed opportunities.

No doubt the most notable aspect of For All We Know is the band. Here, Henderson fronts a piano-less quartet featuring guitarist John Scofield, who had only been heard with the trumpeter on a 1995 Kenny Barron album, bassist Doug Weiss and drummer Billy Drummond, who was part of the Henderson quartet that produced 1998’s Reemergence (also known in Japan as Dreams of Gershwin) and 2001’s Oasis.

Despite a weak program, what makes this thing work particularly well is the positively sublime sound this quartet produces together. Buffering the leader’s mostly muted trumpet – no doubt intended to call up the ghost of Miles Davis – are Billy Drummond’s bracing sensitivity to the occasion and the graceful, bird-like way Doug Weiss keeps things lilting and light on its feet.

But what’s truly extraordinary here is guitarist John Scofield. Not only has Scofield, himself a veteran of the Miles Davis band, always been one of jazz’s most interesting improvisers, he can be one of the most beautiful players of his instrument whenever he wants. Over the last few years, he’s chosen a rougher sounding funk/jam-band sort of thing that he, thankfully, abandons here. He made the right decision. Scofield hasn’t sounded this great in years. The last time I remember him sounding this good on someone else’s record – and such an integral part of the program’s success – was with Joe Henderson on the late tenor saxophonist’s own Miles Davis tribute, So Near, So Far (1993) – ok, Scofield was pretty fine with Chris Potter on Unspoken (1997) and John Patitucci on Now (1998) too. For All We Know is worth it just to hear Scofield on “For All We Know,” “By Myself,” “Missing Miles” and “Popo.”

For the record, Eddie Henderson works up a nice bit at the end of “Jitterbug Waltz,” “For All We Know” and “By Myself” as well - all longer than standard jams that allow for all to provide some witty and expressive improvisation. It’s a shame that more of For All We Know wasn’t like this. But what a treat to hear this quartet play together.
Posted by Douglas Payne at 7:50 PM