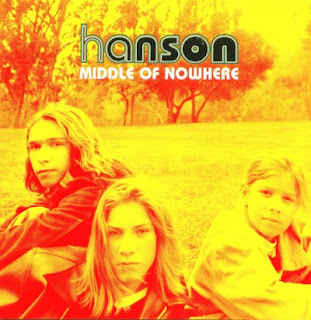 This one completely eluded me at the time. Written (!) and performed by the kid-rock band Hanson and appearing on their 1997 album Middle of Nowhere, “MMMBop” is said to be one of the biggest debut singles of all time and just about one of the most loved and reviled songs ever. It was a number one song in many countries and the tune, surprisingly, topped critics’ polls at Rolling Stone, Spin and even – gasp! – my cultural bellwether, The Village Voice. The song was also nominated for two Grammy Awards in 1998.

I recall hearing the song once or twice at the time, thinking, “huh, catchy song.” Good vocals, too. I really didn’t pay too much attention to it at the time. But, I must have been the only one. Then, the song had an oddly auspicious recurrence – a baker’s dozen years after the fact – on a recent episode of Family Guy (“Baby, You Knock Me Out” – Season 9, Episode 5). It reminded me how much I liked the damned thing and how wonderful the song was all along.

The bizarre lyrics, which are barely intelligible, have something to do with picking the right friends: people who will love you when you lose all your hair. Apparently the concept of “MMMBop” has something to do with a short period of time. In other words, friends come and go in an “MMMBop” but, ah, love(?) lasts forever? Who knows? Guess it’s just supposed to be a bit of fun. And it is.

The energetic joy with which the Hanson boys deliver this tune is catchy. The playful video, which captures the boys at a much different stage of life than wherever they are at today, shows these kids really did contribute to the music that’s heard here. The cute little one, on drums, is frighteningly good. And he really seems to be playing exactly what is heard. The middle one, on vocals, has an energy and vocal talent (and a smile) that is exceptionally noteworthy. The older boy seems to anchor it all with a musical maturity that is staggering.

This may be clever pop by clever kids. But there is something different here. It seems like the kids really did much of this themselves. I don’t know enough about Hanson to be sure (I’ve seen them – older and handsome as hell – do this for gaggles of satisfied girls...just as impressively – again anchored by the eldest Hanson’s guitar). Yet it’s hard to dislike what these three boys have accomplished here. Enjoy!

One thing you forgot to mention is the song was produced by the Dust Brothers, the underrated producing duo behind The Beastie Boys' "Paul's Boutique," Beck's "Odelay" and "Guero" as well as the Fight Club score.

Whoa, Ray. Did not know. Thanks for pointing that out!