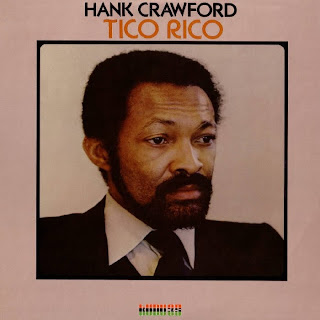 One of my very favorite Kudu albums is alto saxophonist Hank Crawford’s 1977 album Tico Rico. It’s also one of Hank Crawford’s best albums too. Coming at the end of CTI’s glory days, it is often lost in the shuffle and has subsequently never been considered for a CD release in the U.S. or Japan.

But it is a tremendous record, helmed by the great arranger David Matthews on one of his very best days (he provides four originals here, “Tico Rico,” “Lady Soul,” “Lament” and “Funky Rooster”) and provides one of the baddest arrangements ever for The Beatles’ “I’ve Just Seen A Face.”

The band here is magnificent. Hank Crawford has always been surrounded by great musicians on his studio recordings. There’s no exception here. Musicians backing Hank Crawford on alto sax here include Randy Brecker and Jon Faddis on trumpet, Michael Brecker on tenor sax, Jeremy Steig on flute, Cliff Carter on keyboards, the late great Eric Gale on guitar, the late great Gary King on bass, the phenomenal Steve Gadd on drums, the legendary Nicky Marrero on conga, Sue Evans on percussion with, of course, David Matthews arranging it all.

Fortunately, some kind soul named Calicard, also a fan of the album, has posted much of the album on YouTube. I am pleased to be able to share these pieces here in hopes that someone might consider giving Tico Rico a shot on CD.

Funky Rooster:
Posted by Douglas Payne at 1:30 AM

It's Hank Crawford's only album that I don't know. I find that his records cut under the label CTI are under-estimated in France. The only one appreciated is "Wild Flower."

Personally, I really like "Don't you worry bout a thing," "I hear a symphony," and especially "Hank Crawford's back."

His only bad album is "Cajun sunrise."

The George Benson solo on "We got a good thing going" (part of the box set: "The cool revolution") is in a class of its own.